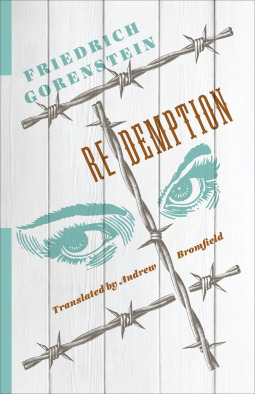 Ukraine, 1946. The Second World War has ended but the scars are open. Families are mourning the sons, fathers, brothers, husbands that fell, the civilians that were massacred, the ones who were driven away and slaughtered in concentration camps. But the terror is still at large, the Soviet era enters its most brutal moments. The people live in a status of continuous supervision and control. Parents and children spying on each other. Neighbours kill neighbours while the members of the Party are getting richer, fatter and more and more bloodthirsty. A young woman, exhausted by her mother’s stupidity and driven by a strange notion of devotion to the state, commits the ultimate betrayal and redemption is too abstract…

The book opens with a harrowing Introduction by Emil Draitser, a chronicle of the socio-political circumstances of the era. From the Great Terror to the abominable Molotov- Ribbentrop Non Aggression Treaty (which various supporters of the…Party try to convince us it never happened because they love distorting History, don’t they? It is known.) , the war against the Nazis, the attempt of the Soviet beasts to silence the Holocaust to the fall of the Iron Curtain. These moments shaped the course of Gorenstein’s life and his work. In addition, Draitser presents an extremely interesting interpretation of the complex relationship between Jesus and Judas.

”And then she realised she ought to have shouted at the very beginning, for her voice changed this place, making it less deserted, silent and strange. Dogs started barking beside low wattle-and-daub houses that sprang around her. The moon sailed out from behind the clouds and started shining at full power this time, and someone came out into a yard nearby.”

Sashenka’s father was killed in action, fighting the Nazis. However, her mother doesn’t seem to care all that much. She has allowed a despicable couple to live with her and her daughter. The man is filthy – a very important feature to remember- and Sashenka discovers that her mother has also found a lover. And all Hell breaks loose. And rightfully so, in my opinion, because there is a forgotten thing called ”decency”.

Sashenka is a woman who one could characterize as ”cruel” but I wouldn’t agree. Obviously. Suffering and a personal notion of injustice have hardened her heart but we should try to view things through her eyes. Hard to do so, especially if you are a man, judging by the existing reviews. She is an extremely controversial and formidable character and even though her actions are as extreme as her personality, I completely understand the impulse that drove her to commit them. Not to mention that most of the people around the poor girl are utterly disgusting and mad. On a side note, I always side with controversial characters…

”Soon the number of stars multiplied so greatly that the entire breadth of the sky wasn’t enough for them, and they were densely crowded together, which rarely happens in winter, but only on sultry August nights. In the moonglow, the snow blazed into life where it was now calmly lying on the ground, and this light, following immediately after darkness, this calm after the blizzard, far from lightening their hearts, only intensified their anguish; for hope had disappeared.”

Gorenstein’s writing is raw, with moments of unbearable cruelty in a society of terror. From losing the right to privacy because the Party dictated so, to scraping the last breadcrumbs, to condemning your own family. The nightmare of Anti-Semitism, a wound that has stained the world for centuries, is present but Gorenstein demonstrates that oppression, torture, exile, and death are right around the corner for everyone who doesn’t kiss Stalin’s arse.

However, not everything is bleak, although this is a dark novel. Sashenka is desperately in need to love and be loved and once this happens, her soul is filled with a new light. Can love make us more compassionate and forgiving? Some believe this, the writer certainly does. Motherhood is also a source of love and understanding, even though Sashenka’s mother is anything but likable. Is redemption achieved in the end? Difficulty to say. I wonder who is the character in the novel that needs redemption? Read it and decide.

Redemption is one more masterpiece to have survived the terror of the Soviet era, brought to us by Columbia University Press, beautifully translated by Andrew Bromfield.

”It was already completely dark outside, night was approaching again, and from the way the windowpanes trembled in the wind, and fine, icy snow sometimes sprinkled against the windows and was suddenly followed by moonlit silence, Sashenka could sense that this night would also be a strange, restless one, full of inexplicable atmospheric phenomena.”