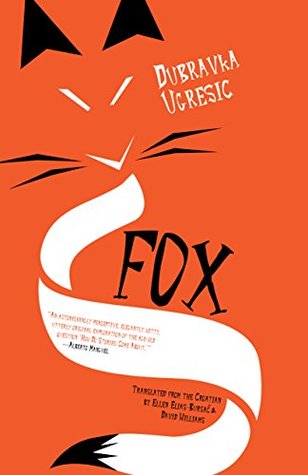 ‘’We are all footnotes, many of us will never have the chance to be read, all of us in an unrelenting and desperate struggle for our lives, for the life of a footnote, to remain on the surface before, in spite of our efforts, we are submerged. Everywhere we leave constant traces of our existence, of our struggle against vacuity. And the greater the vacuity, the more violent our struggle.’’

This is one of the strangest, most unique, most poignant books I’ve ever read. A fascinating, dark, witty mixture of Fiction, memoir, literary criticism. A work where meta-fiction and biography form a graceful dance, a book where reality and fiction are not two clearly distinguished notions. A work where despair, pain, loss, love, and expectations find their domain in Literature.

In six chapters, Ugrešić leads in the world of a writer wounded by a terrible war, confused and troubled by the fact that there seem to be no clear lines between victims and criminals, haunted by the ghost of failure. The writer in Ugrešič’s novel talks of stories that contained characters undeveloped and neglected. What of the stories that were written and what of the ones that never came to be? Two women. A betrayed wife in Kyoto. The widow of a Russian writer, who seems to reach the status of a modern literary goddess in the eyes of the readers despite the fact that she never wrote a word, meeting our writer in Naples,, offering her wisdom.

‘’The stars are all we have here,’’ he laughed.

In a village in beautiful Croatia, our writer meets Bojan, a fascinating man whose job is to detonate the mines left from the war in the 1990s. A man of the law, a philosopher, a lover of Literature, a man who refuses to conform or identify with a particular country. Bojan was my favourite character in the book. He reminded me of a person very close to me (minus the risky job, thank God) and I loved him fiercely.

Then, our literary journey takes us to Russia during the nightmarish era of Stalin, as we witness the rising of the great Russian avant-garde writers and the Great Purge that would be the cause of their tragic demise. We move to the United States to meet a woman in Nabokov’s life and then to Italy in front of young, know-it-all aspiring writers who have no idea what Literature actually is…

The fox stands as a symbol of intelligence and secrecy. Of being a loner, a seductive force, an alluring adversary. A watcher in the night, an outsider. Ugrešić uses the beautiful animal as an image of the writer that sees her work scrutinized because of artificial perceptions. Are we all citizens of the world by choice or have we retreated into a subconscious self-exile, fed up with everyone’s stupidity? What happens when your views don’t correspond to the mob’s ideals? And what about war, the source of all evils in our world?

‘’War is a time when the worst of humankind floats to the surface. Whoever survives must face the consequences.’’

The claustrophobic feeling of being a stranger in your own country, the conviction that you don’t belong anywhere, the isolation, the cruelty of the ignorant. The time when people lose their jobs (or worse) because of the ethnicity written on a piece of useless paper. When fanatics demand blood when censorship destroys a nation’s cultural heritage. When the long-term consequences of war become the cause of the separation of two people who see-to-eye, who had the misfortune to fall in love with each other…

From Kyoto to Naples, from Zagreb and Moscow to Amsterdam, Nottingham, and Milan, Ugrešić writes in witty, raw, powerful language. What is Fiction and what Reality? I wouldn’t dare to guess and it doesn’t matter. Fox is the work of an exceptional, brave writer, a book for brave readers.

‘’People were expelled, people were murdered, people fled in groups or singly to neighboring countries, to distant countries, families were broken up, parents found themselves in one country while their children were somewhere else. And I, too – having earlier inscribed on my inner map a random trajectory- found myself living abroad, becoming a person with two biographies, or two people with one biography, or three people with three biographies and three languages.’’