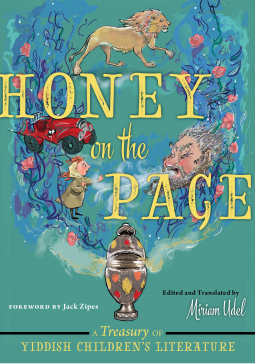 Title: Honey On The Page

A beautiful collection of children’s stories, fables, myths, poems, allegories and fairy tales of Yiddish culture. Through Folklore and customs, family stories, we travel from the beginning of the 20th century to the mid-70s, in a rich tapestry of Jewish holidays, history and tradition. Miriam Udel’s translation is full of spirit and warmth.

It is immensely difficult to choose among the gems included in the collection, but my favourite stories were A Sabbath in the Forest by Yakov Fichmann, The Wind That Got Angry by Moyshe Kulbak, The Alphabet Gets Angry by Moyshe Shifris, The Girl In The Mailbox by Simkhe Geltman, Evie Gets Lost by Berish Oyerbakh who died in the Warsaw Ghetto, one of the countless victims of the Nazi monsters, Mirele’s Birthday by Sarah L. Liebert and the extract from An Unusual Girl From Brooklyn by David Robin.

In this collection, I found some of the most beautiful descriptions of scenery and feelings I’ve ever read in a book. These extracts speak for themselves:

‘’Once in deepest winter, when the cold is strongest, Lipe rose as usual at dawn on a Friday and worked hard through the morning, his fingers flying. He wanted to be early because the winter days were short and the road difficult. He hardly noticed the great sheets of snow that had fallen throughout the night. The cold was so bitter that you wouldn’t let a dog outside in such weather. Lipe was happy to have finished his work early, and he began to prepare for the journey home.’’

‘’Meanwhile the forest was growing darker and more frightening. The frozen branches were all motionless, the tree trunks buried to their waists in snow.  A sadness fell over everything.’’

‘’Who has ever seen or heard of such a thing: children sprouting out of the earth like grass in a field?

Of the kind sun sending her golden rays onto their little heads and the heaven’s dew dripping its pearly drops upon them?

Of songbirds singing cheerful songs and butterflies fluttering by them all around and around?

Of a soft breeze caressing their hair and of angels covering them with their wings and rocking them with lullabies?’’

‘’The street where Shprintse lived was a pretty one and as quiet as in the olden days. The houses there were large, one-story brownstones; leading to each door were five wide marble steps with ornamented brass railings on either side; next to each house was a flower garden; in front of the house, trees; and between the trees, old-fashioned gas street lamps. Every evening, the lamplighter would come to light the street lamps, and every morning, he would come to extinguish the lamps and polish them. The street was paved with stones. When the city had wanted to lay asphalt over the street and introduce electric lights instead of the old-fashioned gas lanterns, the neighbours banded together and wouldn’t stand for it. After all, if the street were paved over and electric lighting installed, then cars would begin to drive down that road, and it would become as noisy and chaotic as all the city’s other modern streets. So it remained old-fashioned and quiet, in the midst of the large, noisy, new streets of the modern city of Brooklyn.’’

Many thanks to New York University Press and NetGalley for the ARC in exchange for an honest review.