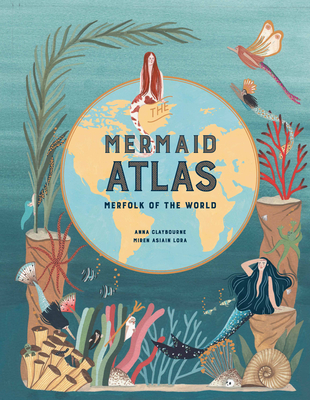 Title: The Mermaid Atlas: Merfolk of the World

”She is a mermaid, but approach her with caution. Her mind swims at a depth most would drown in.”

Mermaids. Complicated, controversial, mysterious, endlessly fascinating creatures of mythology and folklore. Rulers of the waves, protectors and punishers, shape-shifters. Haunting like their haunting song, they dwell in palaces, caves, rivers. They are deities, royalty, fiends, even underwater builders like the Russian Vodyanoy. Known since the early ages of mankind, the Ancient Mesopotamian mermen, the Assyrian goddess Atargatis who fell in love with a mortal man, the Nereids of Greek mythology echo the birth of a myth that grew stronger as the centuries passed. In Greece, we have the myth about the sister of our beloved Alexander the Great. She wonders the seas, asking whether her brother is alive. If the sailors reply ”yes”, she will bless their journey. But a ”no” will lead them to a terrible death.

In Europe, we have the selkies and the Finfolk of the Hildaland, in Orkney, the finwomen need a human husband to gain immortality. In the Hebrides, there are the Blue Men of the Minch. In Cornwall, we have the famous Mermaid Chair connected to the myth of Morveren. Lamia resides in the Basque Country, Lorelei in Germany. Syrenka protects the city of Warsaw, while Rusalka serenades to the Russian moon. And who hasn’t heard the sad song of Melusine? 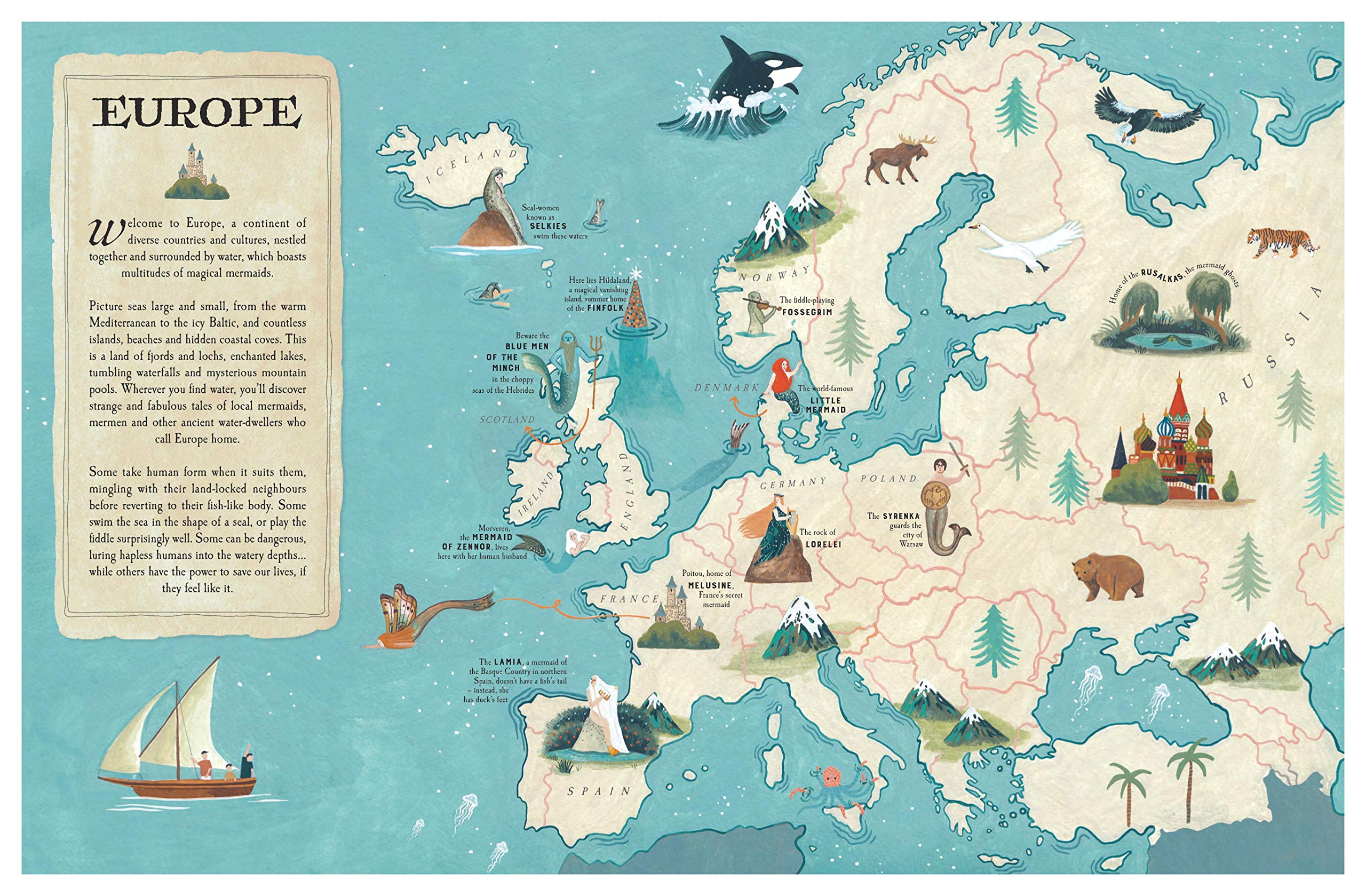 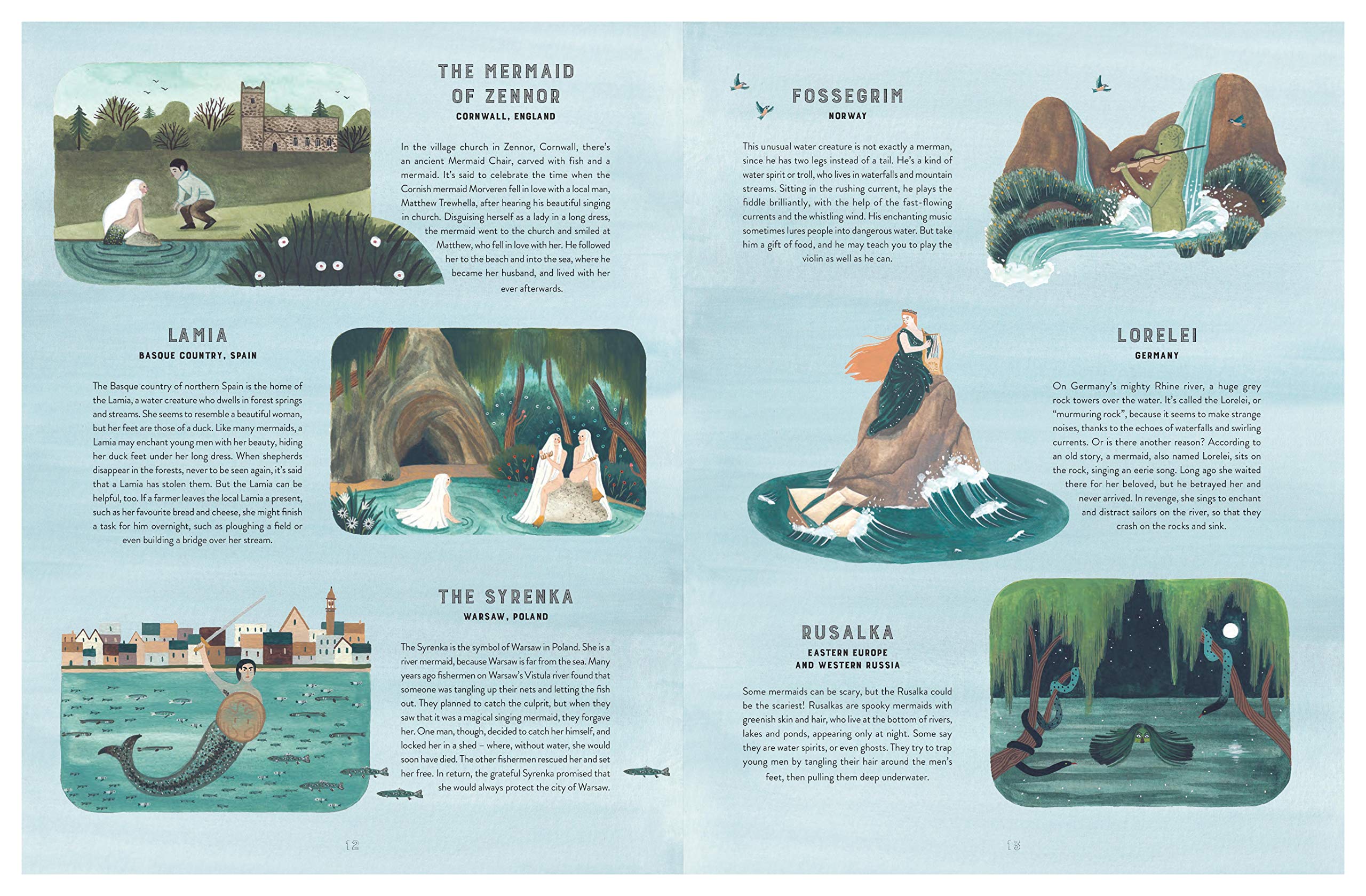 But we know little about the water spirits of the continents, and this beautiful little book is here to fix this. In Nigeria and the Yoruba culture, the mermaid Yemoja is the greatest goddess, the mother of the sun, the moon, the water and all life. In South Africa, Karoo must not be angered or else storms will follow. In Zimbabwe, the Mondao are terrifying, what with their red eyes and sharp teeth and their man-eating habit. The Dogon people in Mali believe that mermaid-like beings descended from the sky in a basket and created water. 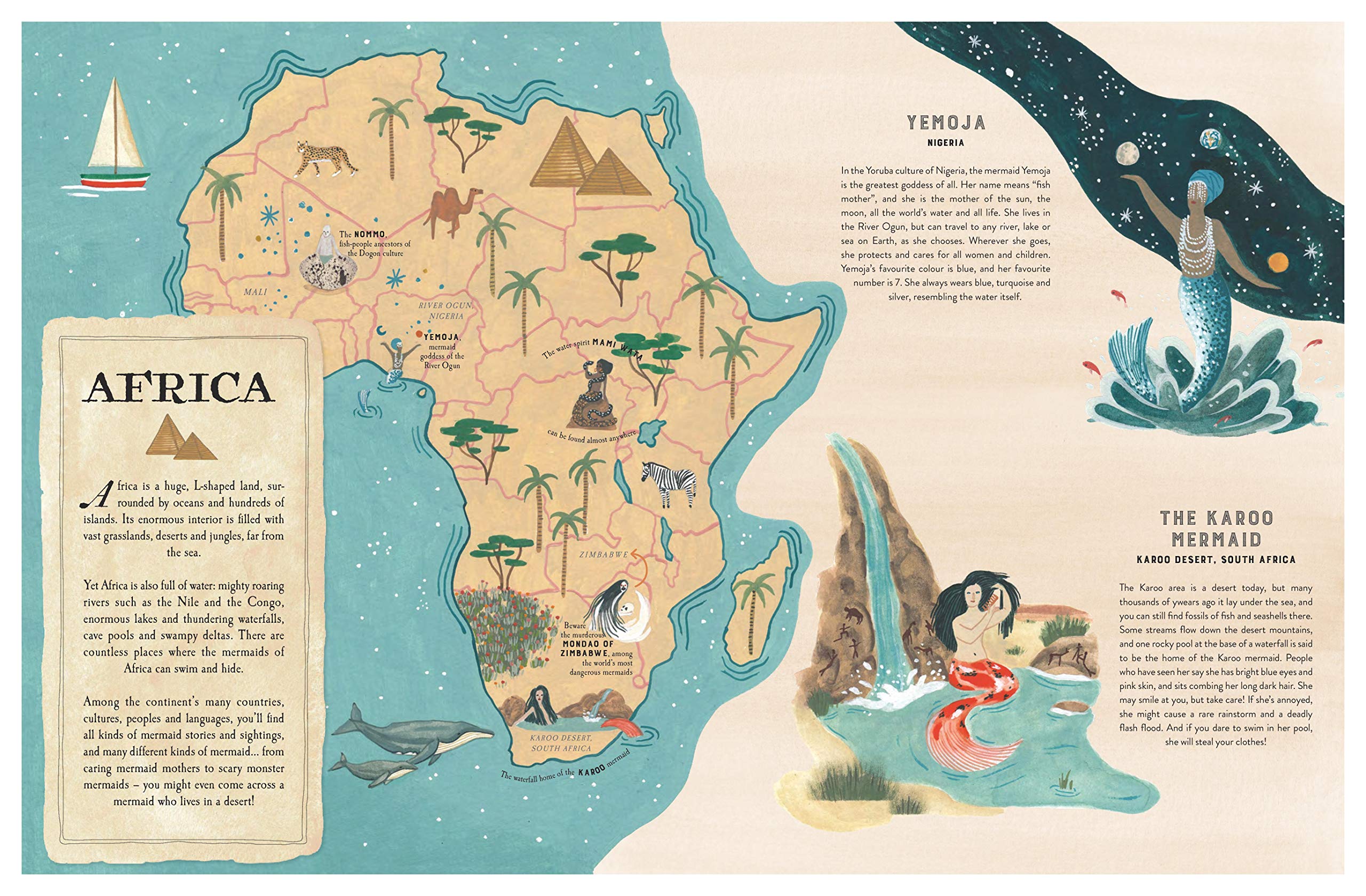 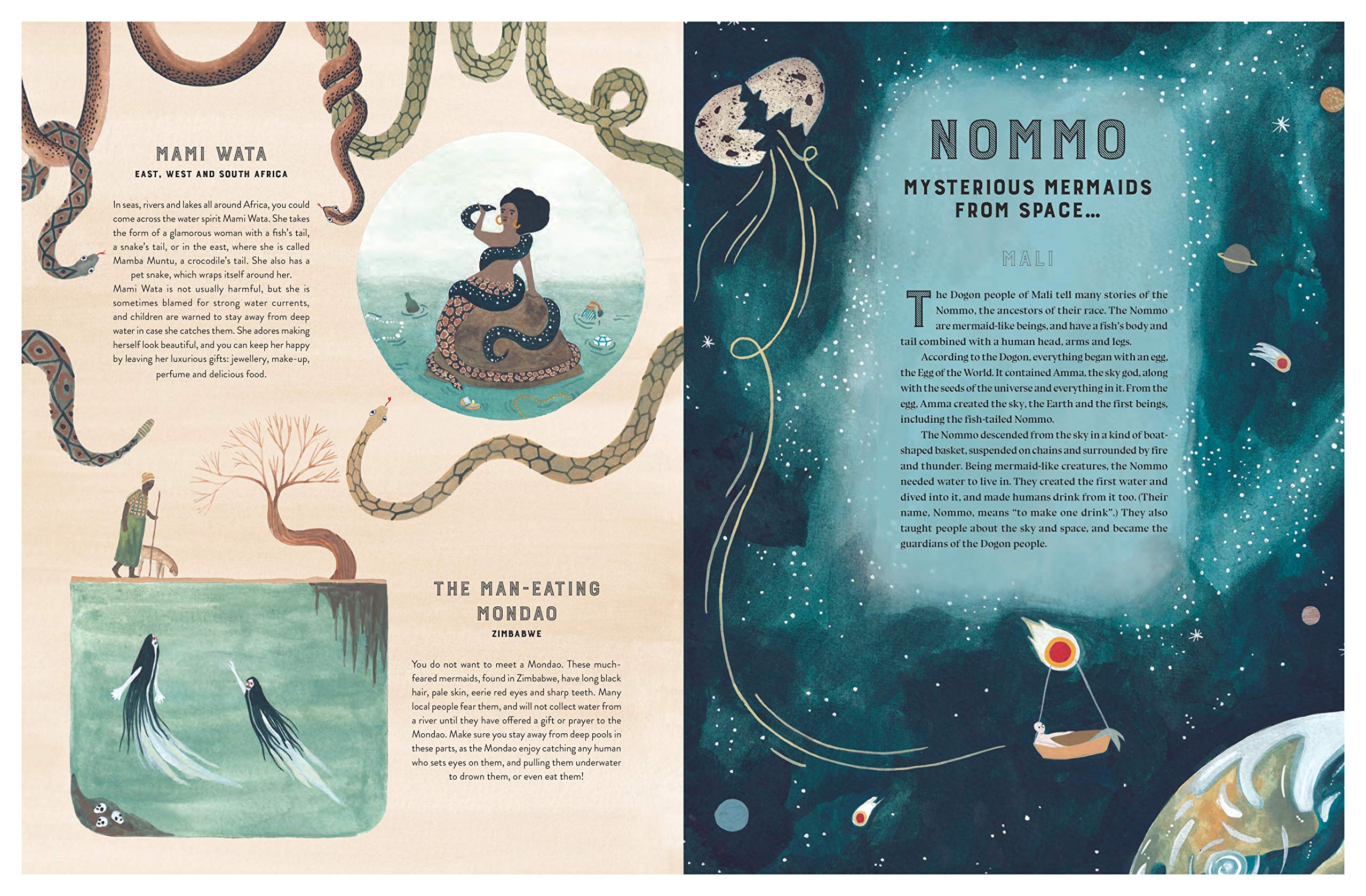 In Asia, the Lobusta resides in Turkey and Central Asia. A frightening, evil creature resembling an old woman whose vile laughter causes storms and disaster. In Korea, the Sinjike once fell in love with a Chinese man. She can be seen on a moonlit night, singing and throwing rocks in the water to warn of danger. In Japan, the Ningyo is a fish with a terrifying human face. If you eat one, you’ll remain young for centuries but ill fortune will follow you.

Moving on to America, we meet Lasiren, a strange goddess residing in Haiti, protector of wealth and wisdom, owning the treasures of the shipwrecks. Men are lured into her lair and won’t be seen again but women return wiser and with the gift of healing. In Patagonia, we find the Sumpall who trap mortals in their kingdom but give fish in return. La Pincoya in Chile protects the sailors, in Lake Titicaca, mermaids play the charango. In Brazil, Iara is the founder of the Amazonian warrior mermaids that lure men to their death, avenging male cruelty. 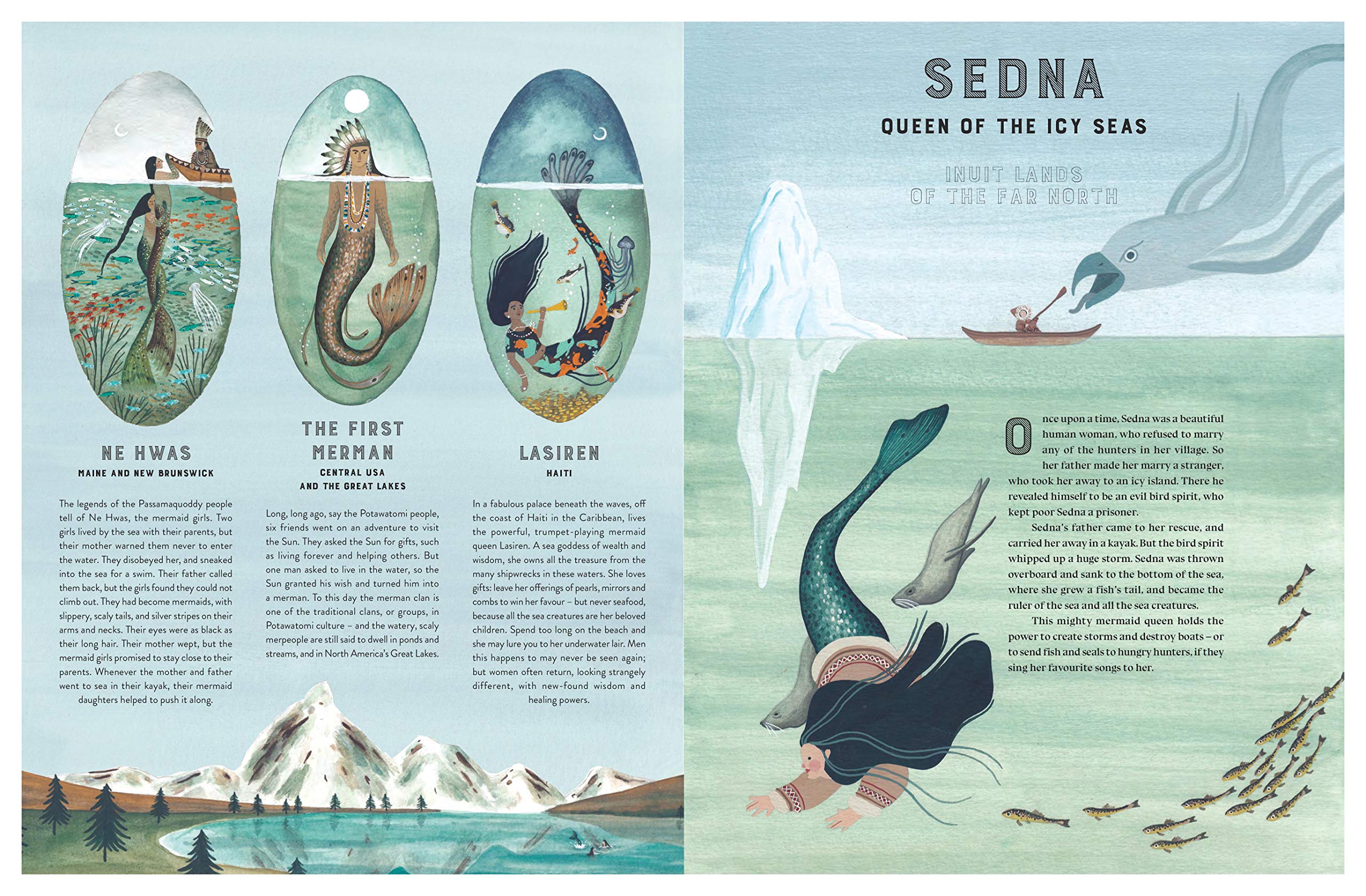 In Oceania, the Dakuwaga, a shark-human god, has made its home in Fiji, protecting the fishermen. In Northern Australia, the Ji-Merdiwa are shape-shifters that send sickness to the one who harms the coast. Images of them must never be created but their walking can be heard on a moonlit night. We also learn of Pania, a Māori mermaid, and Vatea of Cook Islands, father to all.

Marvel at the stories of the Japanese soldiers who claimed to have seen mermaids in Kai Islands in Indonesia in 1943, the finfolk sighting in Kiryat Yam, in Israel, in 2009, and the special ceremony that took place in Zimbabwe in 2012 because the mermaids were really, really angry.

A treasure for any mythology lover.

‘’I must be a mermaid, I have no fear of depth and a great fear of shallow living.’’

Many thanks to Laurence King Publishing and NetGalley for the ARC in exchange for an honest review.