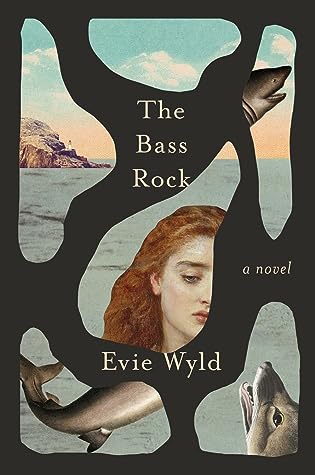 ”The crow takes off and flies to the top branches of the monkey puzzle tree. It yells at me from there.”

Three women, three different eras. Sarah, Ruth, Viviane. Witchcraft, abusing relationships, loss, depressions, danger in every corner. Shadows and omens. And the wild beauty of the Bass Rock witnessing everything. The relationships between women and men, the cruelty against the former, the violence of the later, the betrayal, the naivety.

But no matter how hard I tried, I couldn’t bring myself to like this book at all.

Wyld definitely gave us excellent moments of mystery and atmospheric lyricism, like the extract that follows:

”In the third tree drawing a figure appeared high up in the branches, a black shape, inexpertly drawn, clumsily posed. The next page, closer still, the man was missing his shoes and his feet were white blocks, like a duck’s, and he leaned back in the tree, and when you really looked you could imagine that the man was dead with a branch thrust through his chest.”

There are wolves and ghosts, and crows and crackling sounds. Proper atmosphere, no doubt about that. The problem is that to me it felt forced, as if it HAD to be there to justify the word ”Gothic” on the back cover of the book. The feeling of impending danger was indeed effective and helped me not to lose interest completely as the novel progressed and my patience with the writing was growing thin. Elements of Folk Horror were evident in Ruth’s storyline which started brilliantly and then became a silly, predictable, unbearable soap-opera.

”Honestly, it’s no problem, I’m putting my shoes on now.

I don’t believe you, leaving now, will be there soon.

I grew up in the company of Shakespeare, and Tolstoy, Austen, Bronte, Dickens and Dostoevsky. I worship on the altar of Sarah Perry, Daisy Johnson, Emma Donoghue and Colm Tóibín. Do not ask me to accept that this isn’t awful writing…

Why the need to have 90% of the female characters with a glass of wine to soothe their troubles away in Contemporary Literature? It’s a stereotype, a nightmare of an idea, as was the constant, dirty, illogical, disgusting swearing in Viviane’s chapters. As if her story wasn’t already pretty bad… I am tired, sick and tired of the ”I am a modern witch” trope to justify plot ”twists and turns” that are in fact, predictable and unoriginal. On top of that, a serial-killer subplot? No. And why do certain writers believe that all readers are interested in reading about sex every other page? Her chapters were real torture. The endless descriptions of bodily odours, the numerous (more than I’ve ever seen in a novel) descriptions of basic bodily functions. So excuse me, this isn’t my idea of Literature. There’s raw and realistic, and there’s disgusting and forced provocative. And I never vote for the latter.

In a newspaper, I read about the ”toxic masculinity” in the novel and this only touched the tip of the iceberg. This is the one thing the novel did right. Seen here at its worse and most realistic form. It was powerful, infuriating, shuttering, and I am never the one to build barriers between the two sexes. But repetition and the same-old ”haunted house” tropes formed a clumsily depicted combination. Are all men monsters and all women victims? Of course not. We have fathers, partners, sons, brothers, husbands we love with all our heart and at times, the message the novel wanted to convey left me thinking. But we are here for Literature, not politics (at least I am…) and by my standards, The Bass Rock left me utterly indifferent. In addition, the three women aren’t exactly interesting. On the contrary, they are extremely average, underdeveloped to the point of serving as stereotypical substitutes for agendas. Viviane is disgusting, Ruth is hugely problematic and docile, Sarah remained a mystery. In fact, every character apart from Betty, Christopher and Michael was horrible and this is neither realistic nor interesting.

And what did  Pride and Prejudice ever do to you, dear writer? Don’t mess with works you can’t fathom.

So. Love triangles (Jesus!), marital problems, endless swearing with uncountable times when the word ”fuck” and its derivatives ”graced” the pages of the novel, toilet descriptions, tropes that have been done to perfection by more competent peers of Wyld, painfully irritating characters. This is what I found. A wasted potential, a setting that deserved a better story, better characters. The themes of abuse and retribution are so strong. They formed an excellent premise but they were not enough. Many loved this, many will. But I have the right of my own opinion and for me, it was a frightening failure.