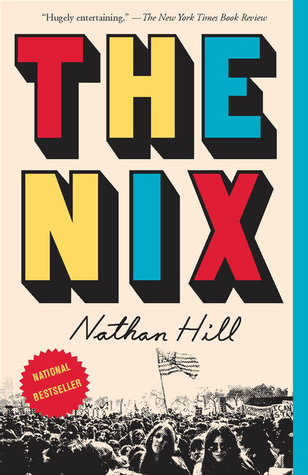 ”Αnd he used the ghost stories his mother told him, all those old Norwegian stories that terrified him. He wrote about a white horse that appeared suddenly, offering a ride, and if the reader decided to mount the horse, terrible death quickly followed. In another ending, the reader becomes a ghost trapped inside of a leaf, too bad to go to heaven, too good to go to hell.”

”They’re not protesting me, per see. Nor my company, specifically. More like the world that brought my company into being. Multinational. Globalization. Capitalism. The ninety-nine percent is, I believe, their catchphrase.”

”That’s the one. Pretty grandiose name, if you ask me. They are not occupying Wall Street so much as a small rectangle of concrete about a thousand feet away from it.”

Nathan Hill creates an exquisite story that takes us from Norway during the Nazi occupation to Iowa during the 60s, the Chicago riots in 1968, to the Great Recession and the Occupy Wall Street movement. He blends a dozen genres, from Magical Realism to Historical Fiction to Literary Fiction, and a hundred techniques and writing styles, and produces a masterpiece where politics and social issues are blended with the folklore of the Nordic lands and the storms that rage in our souls.

Hill comments on the madness that lies in the battlefield of politics. Which one is correct, which one stands on the wrong side of History? No one knows for sure. Racial issues, musings on sexual identity, social status, the publishing world, a deeply corrupted education and judicial system where rich kids have the power to demand the punishment of a teacher who refused to yield, where judges can persecute and condemn innocent citizens without fear or control. He provides accurate commentary on today’s young audience who considers the classics useless and ”why should we ever need to read these?” Because you need Education to become a better person, you idiots, that’s why! I see it on bloody Goodreads all the time and it makes me shiver. But, hey, as long as we write intense (but short, mind you) monologues on Twitter. It goes without saying that I skipped the two chapters that included Laura, the most pathetic creature I’ve ever encountered in a novel and a mirror for most of today’s society…

He vividly depicts the ignorance, naivety, and narrow-mindedness of the radical groups all these years. Groups that are as tyrannical as the ones they protect against. But Faye doesn’t buy their BS, nor does Samuel. Poor Faye is made to feel guilty for being better than her parents and their awful ”social circle” of brutes. To excel is to be proud and vain. Small wonder she had enough! Hill even touches on the ridiculous use of the word ”toxic”, a part of today’s language, beloved by the ones who aren’t aware of the existence of other negative adjectives, because of Twitter and Facebook…

No need to tell you how much I loved Faye and Samuel and how much I loathed Alice, Laura, and Brown. In literary terms, I found this novel to be perfect. Flawless. There are many striking scenes, like the coffin-bearing procession and the 1968 riots. He creates such a brilliant depiction of scenery throughout and especially in New York which he describes with a particular fondness. And did you know that in Norwegian, gift could mean either ”poison” or ” marriage”? Sounds about right, if you ask me.

There is a particular warmth about American Literature. I can’t describe it with accuracy but I feel that even in the midst of extremely difficult events, there is hope and a sense of immediacy and tenderness. This novel is the very definition of this. The Nix is a one-of-a-kind reading experience.

”The things you love the most will one day hurt you the most.”