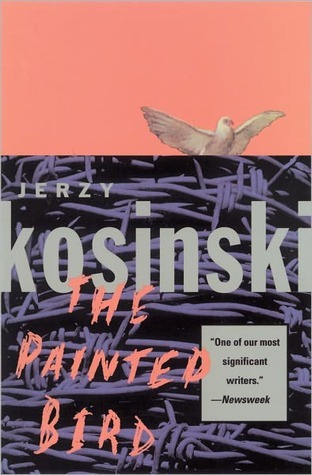 ”We are here in the company of death.”

A young boy finds himself lost, wandering in the countryside of an unnamed Eastern European country during the Second World War. The boy, mute and nameless, faces a world torn apart, a society that doesn’t need any kind of war to change. It is a world stripped off all traces of kindness, compassion and humanity, a world that preys upon a child in its most vulnerable moment.

”As these brightly coloured creatures sought the safety of their fellows, the other birds, seeing them as threatening aliens, attacked and tore at the outcasts until they killed them”

According to Kosinski, this novel is a dark fable that follows the path of Aristophanes’ The Birds. But ”dark” doesn’t even begin to describe it. I am sure most of you know have heard that The Painted Bird is cruelty personified. But it is a cruelty that needs to be read. Because it exposes every single monstrosity humans are capable of and we don’t need war noises playing in the background to acknowledge this. We need to experience a boy’s ordeals through birds and snakes and insects. A child who only vaguely recalls the tender moments of life with parents and whose personality is about to change by witnessing the most horrifying acts you can possibly think of.

We need to witness Evil circling above the heads of villagers who, in this world, are the lowest form of life as seen by the young boy. Even the ravens and the vultures are disgusted by the human corpses. We have to experience the enchantment of the huldra, the cruelty against the Different, the mob that cries ”witchcraft” while praying to a vicious Satan that no Bible could ever mention.

”A rotting crucifix, once painted blue, stood at the crossroads. A holy picture hung at the top, from which a pair of barely visible but seemingly tear-stained eyes gazed into the empty fields and red glow of the rising sun. A gray bird sat on an arm of the cross. On catching sight of me, it spread its wings and vanished.”

”I saw witches hanging from the trees. They stared at me, trying to lead me astray and confuse me. I distinctly heard the shudders of wandering souls which had escaped from the bodies of penitent sinners.”

The boy’s life is filled with graves in silent cemeteries and wandering skulls. The wind rages, the dead moan their sorrows, the dogs howl in desperation and madness. The prayers are hypocritical, the shadows are long and Death haunts the child’s every step. The wrath of an animalistic mob knows no limits. There is no pity for the innocents who are jammed in the wagons, heading to the gas chambers according to the desires of the German viciousness of Hitler and his squad of monsters. They have no pity for those who try to escape their doom. There is no pity for a lonely child. He is a Jew. An Other. Cursed and vilified. Without a land, or a home, or a family. Without the right to exist. It doesn’t matter who fights against the Nazis and the Soviets. The villagers need no pretext to unleash Hell.

Yes, this novel contains every possible trigger warning you can think of. To the absolute extreme. And so does life itself. Do I think this portrayal is accurate? Do I believe that human nature is actually capable of the absolute Evil as portrayed in this novel? Of course, I do. The answer lies in the course of History.

”The urge to survive in inherently unfettered. Can the imagination, any more than the boy, be held prisoner?”