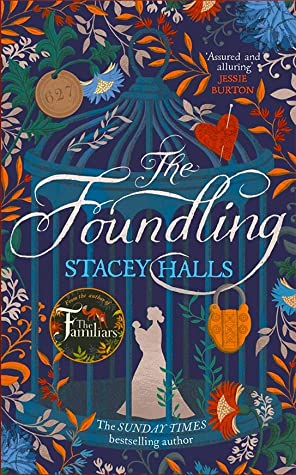 ”People tossed all sorts into the river, including themselves.”

London, 1754. Bess is one of the unfortunate mothers who have to leave their children in the Foundling Hospital, with the desperate hope that she will return to claim her. And indeed, six years later she comes back, true to her word. But her daughter isn’t there. Someone else has claimed her as her own. Bess starts a quest that will leade her in the circles of the metropolis upper class, exposing the hypocrisy, while the lower classes struggle to earn the daily bread.

If you had any doubts as to whether The Foundling was as good as The Familiars, rest assured. Stacey Halls’s second novel is equally exciting, poignant and very, very different. She creates a story dedicated to motherhood, womanhood and the undying devotion of a mother towards her child. Two women who lost their mother at an early age try to come to terms with what it means to care for a child. One is a natural, the other fails miserably. One woman gives unconditionally, the other offers money but no tenderness.

There are so many themes intertwined in the story of Bess and Alexandra. Halls chooses to place the action in the 18th century, but both women can be characterized as ”modern”, without being unrealistic. They rule their fate, they choose to lead their lived by their choices, and although they are aided or hindered by men, the course of the action is decided by them. Even though their backgrounds are opposite, they are both independent. It is also interesting that Halls decides to depict Bess’s warm relationship with her father, so there is complete balance in the depiction of the role of the two sexes.

The two women at the opposite ends of the spectrum not only financially but also psychologically. Bess is pragmatic, sensitive, level-headed, honest and determined. I loved her and I do wish she had been the sole focus of the novel. I did not like Alexandra at all, I couldn’t understand her, I couldn’t accept or respect her views. She is deeply troubled and represents the epitome of the hypocritical upper class. She is incapable of any trace of tenderness towards a child, to the point of being cruel. She lives in the past but there is no excuse for her tyranny. Doctor Mead and Lyle are great characters and I really loved them.

”Like the Thames tide the city had a temperament, and it could give or take.”

I’ve often said that London is a character and this novel is no exception. Georgian London is not very different from its Victorian version. The smells, the sounds of the market, the gardens, the promenades of the high society and the derelict houses of the less fortunate. Every inch of the city comes alive, providing the noisy setting of a very humane story.

The subject matter could have easily become a frightful melodrama but not here. Not when a novel is written by one of the best writers of today’s Historical Fiction. A hymn to the bond between mothers and daughters and to staying true to yourself, fighting for what belongs to you.

”You gentry morts have no clue. You sit in your drawing rooms and bury your heads in your cushions, cause prison don’t happen to the likes of you. You read about in the papers, but it’s just a story to you. An idea. I can tell you what it’s really like.”

Many thanks to MIRA and NetGalley for the ARC in exchange for an honest review.