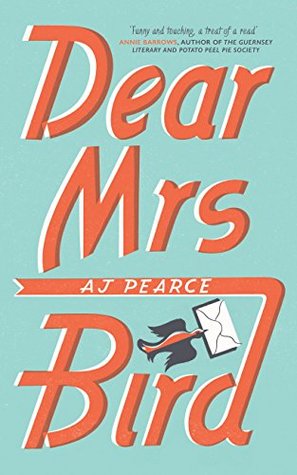 ”Μrs Bird says if people get themselves into a silly pickle, they’ve only themselves to blame.”

London is trying to survive in the middle of the Blitz. The Londoners are doing their best to go on with their lives, amidst the devastating results of the air raids. A young woman, Emmeline, wants to become a war correspondent. However, she is stuck in the ”headquarters” of a dying magazine, typing letters addressed to Mrs Bird, a formidable editor who gives advice on everything. Everything that doesn’t fall into the subcategories of…Unpleasantness. Which is a problem. Emmeline takes the discarded letters (and their writers) under her wings and becomes…Mrs Bird.

”It’s all absolutely under control.”

Well, not quite. Control is lost when decorum takes over in an era where changes abound, brought about by the special circumstances that arise in a terrible war. However, problems that concern daily issues do not stop. They need attention and require solutions, and this is why Emmeline dedicates herself in solving the problems that Mrs Bird refuses to acknowledge.

Α.J.Pearce writes in pleasant language about circumstances that are anything but. Seemingly light-hearted, her writing elegantly exposes a major issue of the era. Women were denied information and means of prevention and protection in the name of propriety, They were not the Good Sorts that Mrs Bird accepts. Their morality was frightfully low…Young love, (or love in general), sexual relations, divorce, pregnancy, menopause. Unpleasantness is everywhere along with the traits that Mrs Bird considers as signs of weakness. In a time when Death was literally around the corner and women volunteered their powers to the fight against tyranny, they were denied their independence and vital information to protect their well-being. Their last resort was to address a…magazine.

Emmeline is a stubborn girl and I really liked her. Thankfully, she is the heart of the novel. The rest of the characters are nothing to write home about with the possible exception of Mr Collins. Bunty is utterly irritating, Mrs Bird is a cardboard shrew, the male characters are used as vehicles, doing nothing. The problem with Emmy is that she is awfully good. Too good. And immensely naive to the point of exploitation. And yet, there was something in the way her character is constructed that I couldn’t help but sympathize with her, even though her motives and choices were completely beyond my understanding of behaviour and decisions.

The atmosphere of London during the dark years of WWII comes alive and although the story could definitely be characterized as ”predictable”, there is much to find below the surface. Sometimes, a light-hearted but meaningful read is all we need…