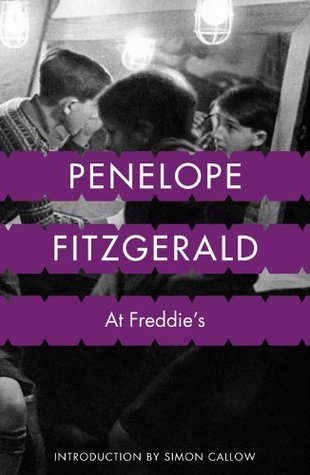 ”Although Freddie usually began by saying something gracious, the caller’s first instinct was that of self-preservation, or even to make sure that the door, now to the rear, could be reached in a hurry. Yet in fact, no one left before they had to. The margin between alarm and fascination was soon crossed.”

At Freddie’s, young students are preparing to conquer the London stage and film industry. At Freddie’s, despairing teachers with questionable skills do the best they can through meager means. At Freddie’s, a formidable headmistress has created an institution out of nothing. They say Theatre is hard but you have seen nothing like Freddie yet…

”You must tell me the moment I start going to pieces.”

Penelope Fitzgerald worked for the BBC during the nightmare of the Blitz. She offered her services in a small bookshop in Suffolk, she lived on a barge on the Thames, working as a teacher at a stage school. She is the ideal person to take us on a tour in a world – because that’s what Theatre is – of talent and misfits, opportunities and disaster. And somewhere at the back of the auditorium, knowledge, and hope are clapping knowingly…

Freddie is a force on its own. She has succeeded in creating an institution but what happens now? The 1960s are changing the world day by day, the demands of the entertainment industry are different, the competent teachers are hard to find. The young students don’t seem to care about knowledge and personality. They just want the right ”now” that will bring them to the wealthy ”tomorrow.” Pierce, an indifferent young man, is a teacher who wants a salary and a wife. On his own terms. Hannah is the ray of light. The idealist teacher that tries and tries but is in danger to fail because of her fleeting heart. She portrays the independence that is becoming a reality for the young women of the era.

One could say that not much happens in the course of the novel. But this is not that kind of a novel. This is a comedy of manners and characters. A look, however brief, to the reality of the children who saw Theatre as a way to success, in a country where Theatre runs in the blood of every citizen. The reality of the teachers who try to communicate with their students, while their problems have to be put aside in order not to crush them. In a time when values and codes of behaviour are being altered, a headmistress refuses to go with the flow. And where does Shakespeare stand in this situation?

In elegant sarcasm and acute characterization, Penelope Fitzgerald writes about a society and an institution that try to decide which direction to follow.

”It’s a great mistake to live with past victories.”