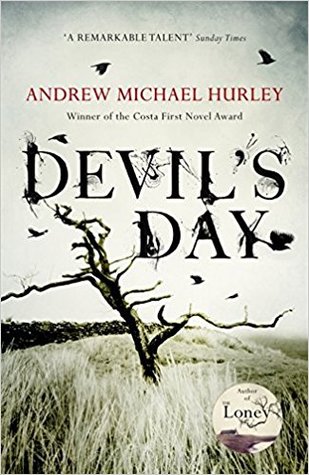 The apples and the hay,

The leaves will wither on the bough,

And all will fall by Devil’s Day.”

Decades ago, the Endlands were attacked by the Blizzard. Livestock and residents fell to its wrath. But that was no ordinary blizzard. It was an attack orchestrated by the Devil.

Now, Devil’s Day commemorates the survival of the community. Now, it is a day for gathering and remembering. An autumn ritual of golden leaves, acorns, and mossy branches. A chance for the children to sing songs and light bonfires. A day to satisfy the Devil, then keep him away. Because ”all stories in the valley have to begin with the Devil.”

”All we ever saw were stories.”

John and his wife, Kat, return to Lancashire for Devil’s Day and the funeral of John’s grandfather. Once in the village, the couple realizes that the past hasn’t died, secrets are gradually surfacing and danger comes from all sides. How can you cope with expectations and obligations? How can you obey customs that seem too threatening to be considered mere ”legends”?

”A vixen yelped in the trees by the Beasley’s bridge, hollow with hunger. And further away, I thought I heard the moaning of the stags on the moor.”

Hurley’s writing is exquisite when it comes to the depiction of the moors and the influence of the beautiful, untamed, mystical landscape. Hard for a story not to ”bathe” in the unique atmosphere of the moorlands. In this novel, the land isn’t just vaguely strange. It is downright threatening. Its residents have created a claustrophobic society glued to a distorted notion of tradition, unwilling to change, unrelenting towards the strangers, like Kat, who cannot ”understand” the passion of following dubious customs and the obsession with continuity.

”It was hard to describe the noises that were there behind them as they made their way along the Corpse Road, the Gaffer said. Like crows calling and yet like children crying too. And every so often, the sound seemed to fly over their heads, low enough to make them duck, a hard, loud scraping like metal on stone.”

Lancashire has an abundance of myths and folk tales associated with the darkest elements of Folklore, like witchcraft and the Devil. The heart of the story brings to mind the well-known incident of the Devil’s Footsteps that took place in Devon in 1855. In Lancashire there are tales of school children unwittingly raising the Devil in Burnley and Clitheroe, there are sites rumoured to have been built with the intervention of Old Jack and, of course, let us not forget the infamous Pendle Witches. Apart from the Devil stories, the county is a land where the pagan past found ways to infiltrate Christianity, something that can easily be observed in the harvest and solstice rituals of the British countryside. So, folklore related to Death and the Devil is very prominent in this novel. In addition, Hurley enters the field of Contemporary Folk Horror, reminiscing cult British films of the 60s and 70s, making use of the motif of the expectant mother who becomes more and more sensitive to anything unusual and dangerous.

So, as far as the atmosphere and the story are concerned, Hurley’s novel is exceptional. The problem I faced had to do with the characters. With the exception of Kat whom I wanted to comfort since the beginning of the story, the rest of the cast is beyond irritating. Especially the female characters from Liz to Grace and anyone else were the epitome of horrible characterization and the most negative portrayal of female camaraderie and motherhood. Everyone is utterly bonkers and poor Kat has to put up with a squad of barbarian fanatics and the most pathetic husband imaginable. This was an issue I encountered in Starve Acre as well, my introduction to Hurley’s work. His skills in creating interesting characters seem to be extremely limited…

Starve Acre was a whooping disaster for me. Devil’s Day was far better in terms of atmosphere, dialogue and plot but the characters were impossibly weak. My fondness for Folklore and the moorlands along with the beautiful writing made me rate this novel with 4 stars. I reserve judgement on Hurley, though, until I read The Loney.

Eat up all your cake.