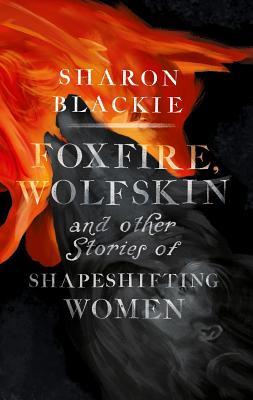 Title: Foxfire, Wolfskin and Other Stories of Shapeshifting Women

”No one wants to work the land, now; they just want to sit and look out of the picture window and stare at the water. A ‘view’, they call is, as if they had nothing but eyes to know this place with- and as if their eyes could ever even scratch the surface of it from where they stand. His friends and family have been dying all around him for years, and some days it seems that there’ll only be him left standing at the end of the world. A crumbling saint; a reluctant relic of a way of life that’s gone forever. Just like that poem she read, years ago now- about a stone statue, all that was left dissolving in the desert at the end of everything.”

Daphne was turned into a plant to escape Apollo’s unwanted attention. Io was turned into a cow to flee Hera’s wrath. Medusa fell victim to Athena’s illogical revenge. Arachne dared to challenge the Goddess of Wisdom and became a loathsome insect. Greek Mythology is full of stories of women who ”shapeshifted” with or without their will, because of fear, love, transgression. All cultures are rich in stories of shapeshifting women, each one a universe in itself.

In this beautiful volume, we are given retellings of the tales of old Europe and tales where characters are given a new voice. Sharon Blackie has also included notes regarding the inspiration behind each story. 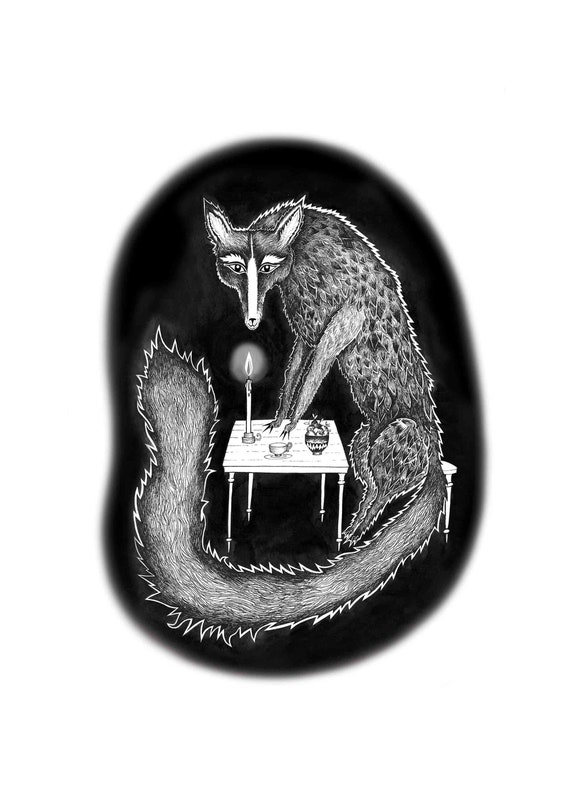 Wolfskin: A story based on a traditional Croatian/Slavic myth with an interesting ending.

The Last Man Standing: A tale inspired by an Irish myth, set in Scotland. A story of old age and true love.

The Bogman’s Wife: A Scottish/Irish story of a mermaid’s rightful revenge, inspired by W.B.Yeats’ poem The Song of Wandering Aengus.

Foxfire: A Scandinavian tale of the huldra, a woman-fox that seduces men who wander in the forest, exacting revenge on those who fail to satisfy her. 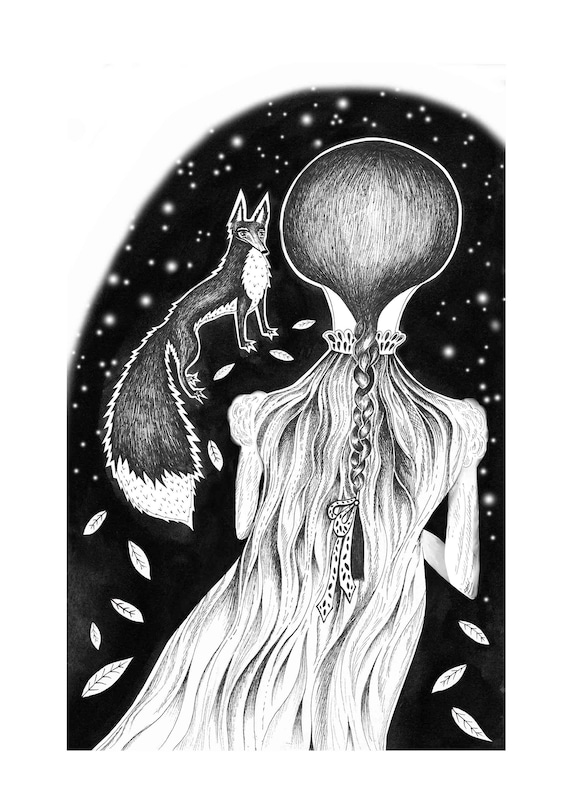 ”It was the human skulls on top of the fenceposts that gave the place away. Though I have to say, it wasn’t quite what I’d been expecting. Every one of them had a candle inside, eye sockets all lit up, grinning away in the late afternoon gloom like some half=crazed band of jack – o’- lanterns.”

Meeting Baba Yaga: This tale was supposedly inspired by the classic Russian story of Vasilisa the Brave (…and not ”Vasalisa” as the writer states…). The Russian woods and Baba Yaga deserved better treatment than a story whose main character is the epitome of the middle-aged newly-turned into a hippie who is uneducated, ignorant, disrespectful, whose only source of ”education” is the …Tardis and lifestyle magazines. I was disgusted by this treatment of Russian culture. The character (and by extension, the writer) should learn how to spell before they criticize Russia and its vast cultural significance. Appalling. 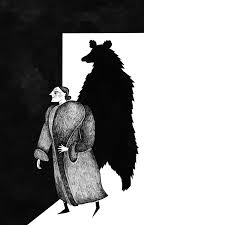 The Water Horse: A Scottish/Irish story, set in the Highlands, of the legendary each-uisge, the horse that acquires the appearance of young men. A beautiful tale of a girl who didn’t pay attention to cautionary tales, a myth of true love that echoed The Gloaming.

”This land, this island of white and snow. Can you follow the sparkling motes of freezing mist through Arctic air? Do you see the aurora’s brushstrokes on the pure, translucent canvas of our icebound cliffs? This beauty so pellucid, so serene that your heart would shatter if you thought it might pass forever from this world. This beauty. No wonder you come seeking it. This last bastion of ice; the still point of a burning world. I have seen the icebergs weep; I have seen the dissolution of great glaciers. Snow Queen has raised them from the dead.”

It is Snow Quuen now who knows best; it is Snow Queen who alone has held true.

Snow Queen will make an iceberg of your heart.”

Snow Queen: The Danish tale is turned into a Dystopian story set in a world destroyed by climate change, set in an incredibly beautiful and terrifying landscape.

The Saturday Diary of the Fairy Melusine: Melusine is given voice to condemn her husband’s abuse in a story inspired by the French myth of the Serpent Wife.

”You have listened to the song of the blackthorn at winter solstice, and drunk from the well at the world’s end. Here you are now, and here you will linger on. Forever? You have no stories about forever.”

The Madness of Mis: An Irish tale of a daughter who lost her father and became one with the mountains until she fell in love. Haunting and brilliantly written.

I Shall Go Into A Hare: A tale about the hare and the Easter eggs as symbols of fertility and the association between witches and hares. Set in our era, very raw. Brilliant. 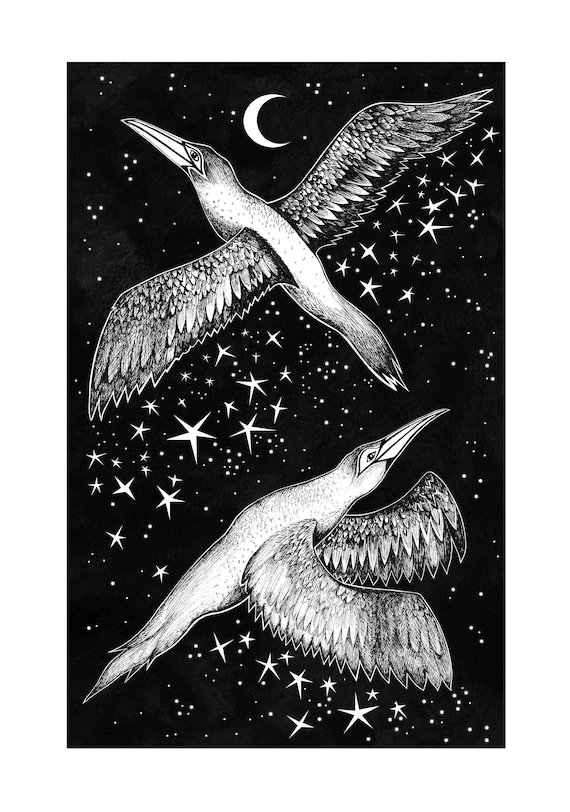 The Weight of a Human Heart: Based on the famous love triangle of the Irish hero Cu Culainn, Emer and Fand. I don’t believe this was a positive moment in this book. The final twist seemed to me a cheap gimmick, a bone to satisfy the expectations of the so-called ”today’s” audience.

Flower Face: A tale of scorn, betrayal, unimaginable abuse and retribution, based on the Welsh myth of Blodeuwedd from the Mabinogion. 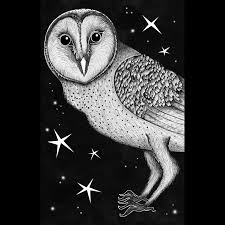 ”She cannot face another hundred years of this. The last time she renewed herself, the Great War had just ended and there was hope. Who’d have imagined they’d do it all again? Who’d have thought, in just one hundred years, they’d have caused so much carnage? What could they do in another century, with all their implacable power?”

No Country For Old Women: A haunting retelling of the Gaelic myth of the Cailleath who becomes young every hundred years by bathing in the lake. Here, she seems utterly done with all the mess we’ve made…

Apart from two disappointing moments, I loved Blackie’s writing and the immediacy of the characters’ voices. I appreciated the balance between the two sexes, the focus on love,, honour and independence as reasons to transform and escape. This is pure literary quality.

”Perhaps, when the world has turned a  few more times, when their remaining relics have all crumbled away into dust- perhaps then she will bathe again on the flat rock by the sea loch at Bealtaine. But she does not think she will.

The last of her men was the last man standing. And she will be the last of the fairy wives.”