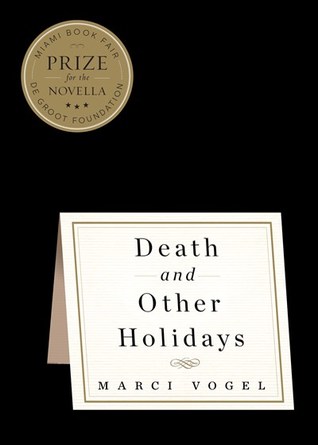 Title: Death and Other Holidays

”I know you now, even if it’s only a little bit, and I know it’s strange, but I didn’t before, and I might never have known you unless somebody had written these lines. Who knows how many people are missing you this very minute, late at night or early in the morning, drinking tea with milk, reading about the life you had, and wondering how are your loved ones doing?”

April is a young woman, soon turning 30, living in Los Angeles. Always optimistic and gentle, smart and acutely honest, she fights with the very tangible reality of Death. The dark visitor has claimed her stepfather and her father had committed suicide years ago. As the turbulent decade of the 1990s is reaching its end, April takes on a year-long journey in the City of Angels, in a city without seasons. Spring, summer, autumn, winter. Days of changes, of holidays, of family gathering, of love and loss and sharing. Days when Death is casting his terrible shadow…

This is a quietly beautiful, tender book. Do not expect any shuttering incidents or intricate twists. This is an account, an array of snippets through the eyes of a very approachable character who contemplates on living alone and then sharing the present and the possibility of a future along with a special someone, on adult life and dealing with bitter loss. The worries of an uncertain financial situation, the Jewish traditions of her family, the noise and clutter of the big city, depression and being afraid of a new start. In essence, this novel is the narration of experiences we all have been through, issues we have been called to deal with and overcome.

The prose in Death and Other Holidays reminds me of the sweet, mellow afternoon sunlight that finds its way through the window, lending a golden glow in our room, the soft sun rays that are slowly turning dimmer as afternoon merges into evening in a late spring day. Sometimes, quietness and simplicity speak volumes…

”In the Magic Mountain, Thomas Mann describes the astronomical phenomenon where, half the year, the northern hemisphere appears inclined toward life, the days stretching longer and longer until they reach their highest point of light, the summer solstice.

The calendar marks the day as the zenith of sunshine, but what’s really happening is that from that point on, the North Pole begins moving farther and farther away from the sun,m toward winter, and the darkest day of the year. It has to do with position. The moment your side of the planet reaches its peak, you’re already headed into the night.”