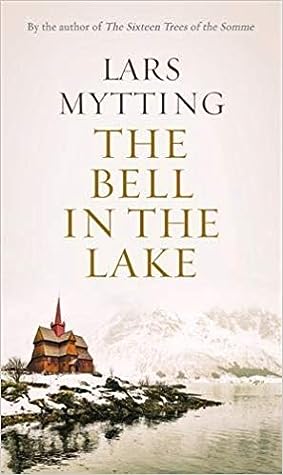 ”The Hekne twins were young women when one fell ill. The thought of what this might mean – that the survivor would have to drag her sister’s corpse around with her- was unbearable. So their father, Erik Hekne, went to the church and prayed for them to be allowed to die together.”

”Winter”, he thought, ”that wretched winter.

In this small Norwegian community, the past is everywhere. In the myths narrated by the elderly, in the names that echo the deities of old, in the beautiful carvings found in the stave churches, symbols commemorating the pagan past in perfect harmony with the Christian present. Above all, it resides in the Sister Bells, cast out of the pain and gratitude of a father. Two church bells that warn of misfortune and danger. A young woman trying to discover what lies beyond the boundaries of the village. A pastor that wishes to follow the times that change. A German architect who wants to bite off more than he can chew.

‘’He was told that the villagers had, since time immemorial, kept their dead on their farms through the winter, frozen stiff in their coffins, even the bodies of children and babies could lie there for months, as everyday life carried on about them.’’

Mytting’s story could only take place in Norway. It would have been impossible to find a land charged with such powerful energy coming from a haunting past and a mystical landscape. Following a striking, fairytale-like start, we are introduced to Astrid and Kai’s world, in an era when change abounds, science has started to pave new ways and women begin searching for a purpose and an independent existence. Kai, the young pastor, tries to discover how to balance religion and modernity and begins a fight against poverty and hardship. Astrid seeks love and escape, her rebellious nature protesting against a fate that has already been decided for her.

Do we have the right to destroy our heritage in the name of change, even if our intentions are honest? Can we easily dismiss traditions as ”prejudices” and deny that the spirits of our ancestors may find a way to have a say or two in such matters? When misfortunes start, when Kari På Vona comes out of the woods, when crows and wolves wander among humans and the villagers start thinking of the Midgard Serpent, when poverty claims souls by the dozen and spirits reside in the old belfry, can we say beyond any doubt that everything is a ”coincidence”? I, for once, cannot.

This is Historical Fiction at its best and it would have been extraordinary if the translator had actually managed to depict the spirit of the language faithfully. The choice of having the villagers speak in Scottish dialect and the inserted verbal ”mannerisms” were jarring to say the least. However, it would be a shame to subtract a star because of translation issues. The Bell In The Lake is a haunting journey to Norway, its folklore and heroic legends, its unique landscape and a homage to the resilience and determination of women.

”Something moved here, something greater, something that could never be confined to a curriculum at the academy. Something existed beneath these arches that could never be dispersed by the air, or divided into explicable constituents. It was the secret sail of hallowed wood, a smoky figure that had grown out of many centuries of grief and hope. Out of the longings of hundreds of souls, long dead, longings so strong as to be unendurable in their time, but which, liberated by death, had gathered here to float for ever.”

Many thanks to MacLehose Press and NetGalley for the ARC in exchange for an honest review.