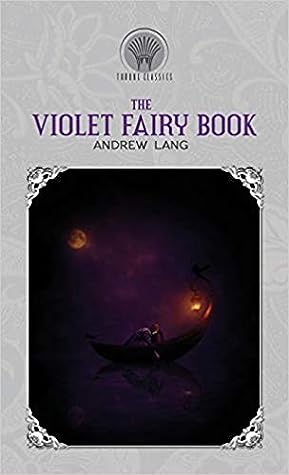 ”Stories that have been inherited by our earliest civilised ancestors, who really believed that beasts and trees and stones can talk if they choose, and behave kindly or unkindly. The stories are full of the oldest ideas of ages when science did not exist and magic took the place of science.”

My first experience with Andrew Lang’s writing took place at university via a very interesting bibliography on Folklore. I hadn’t had the chance to read a volume of the Fairy Books series until I discovered the entire collection in my favourite bookshop. I decided to start with The Violet Fairy Book that includes 25 tales from Serbia, Estonia, Lithuania, Russia, Japan, Africa, Romania, Portugal, Italy, Sweden and Germany.

(The Fairy of the Dawn, Romania)

Brave princesses who fight for their destiny, princes and young peasants who are tested in all sorts of ways, kings who are deceived by evil queens, daughters who take up arms to protect their families, wise women with their spells and curses, animals that accompany the heroines and heroes, dragons, dwarves, bewitched children, fairies and giants. And even if certain tales may seem dated and old-fashioned, we need to remember that forced modern values and political correctness are of no use here. Tales and fables are what they are, born out of their era and particular social circumstances. Anything else is one more chance for ridiculous discussion on social media.

” ‘Between Christmas and the New Year’, said he, ‘I often amuse myself by wandering about the earth watching the doings of men and learning something about them. But as far as I have seen and heard I cannot speak well of them. The greatest part of them are always quarreling and complaining of each other’s faults, while nobody thinks of his own.”

My favourite tales in the volume are A Tale of the Tontlawald from Estonia, The Three Princes and their Beasts from Lithuania, The Goat’s Ears of the Emperor Trojan, The Nine- Pea Hens and the Golden Apples from Serbia, The Lute Player from Russia, The Child Who Came From An Egg from Estonia, The Two Frogs from Japan, The Underground Dwarves from Estonia, The Boys With the Golden Stars from Romania, and The Frog, an Italian version of the Russian tale of The Frog Princess.

”I sing of blooming flowers

Made sweet by sun and rain;

Of all the bliss of love’s first kiss,

‘Of the sad captive’s longing

Within his prison wall,

Of hearts that sigh when none are nigh

To answer to their call.”

” ‘Warriors’, he told her, ‘only rest when they have won the victory. You have still another battle to fight, and it is the hardest of all.”