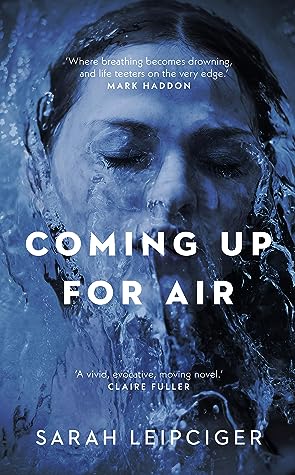 ”The Highlands is a melancholic place. The mountains are almost always hidden in mist and the tongues of blue that lick the sky are watery and fleeting, but there is a ballad to the landscape that exists in everything. In the wind, you can hear battle. The bog that sucks keenly at your boots has memory.”

Water has always fascinated the human race, with its unpredictable nature and mysticism. Water is the source of life, a wondrous barrier that separates and, at the same time, unites countries, the means of exploration that led us to discover new lands. Water is freedom. But it is also death. Whether by the game of wrath of Nature or by the desire of a human being to end the journey of life, water is a force that rules the human fate. This immensely beautiful novel has found the perfect balance between drowning and swimming to freedom.

Leipciger takes us on a journey to Paris during the end of the 19th century, Norway during the 50s-60s and Canada from the 1980s to our time. The heart of the novel is the unidentified young woman, known as L’Inconnue de la Seine, who was drowned in the legendary river and lent her face to the creation of Resusci Anne, the manikin used for CPR training, becoming the ”most kissed” face of all time. The writer reimagines her adult life and the steps that led to her end. At the same time, we are allowed in the story of a father, a toymaker, who suffered a terrible loss and a woman who struggles to overcome the disease that has been haunting her life since her birth.

The three characters are closely connected through the powerful theme of fighting to overcome the evil that comes your way. A doomed love affair, an unbearable loss, an affliction that leaves you breathless and hopeless. What if despair is an act of freedom, even though it is incomprehensible to most of us, what of creation out of the macabre is a way to cope with your pain? Leipciger also makes use of the fascinating concepts of taxidermy and doll-making, and comments on the themes of female sexuality, motherhood, social status, and medicine. The themes are handled with respect and elegance, and the narration flows almost poetically.

This is a novel of quiet beauty amidst the darkness created by factors we cannot control. Three moving stories within three different settings that demonstrate how human beings are anything but isolated from each other. L’Inconnue became an inspiration for Rilke, Nabokov, Aragon. She has found a magnificent place in Sarah Leipciger’s beautiful novel.

Many thanks to Ruth Richardson and Doubleday for the ARC in exchange for an honest review.