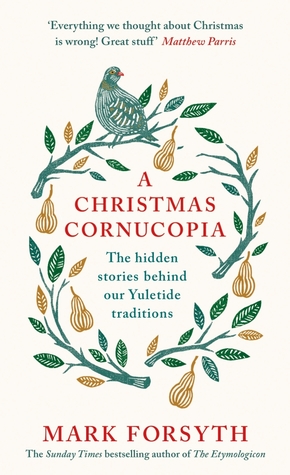 ”There’s a lovely story about a Tokyo department store, back in the days when Christmas was unknown in Japan. The head of this store had heard rumours of a Western tradition that involved a massive shopping spree and he wanted to introduce it to Tokyo. So he sent some of his stuff to investigate, and the result was that on Christmas Eve the shop’s main window was decorated with a huge Santa Claus nailed to a cross.”

What is the evolution of the Christmas Dinner throughout History? What is the actual (and rather complicated…) reason we celebrate Christmas on the 25th of December? How did the Christmas Tree manage to invade our households? How fed-up could a mother be to invent the Advent countdown? What is the big deal with carols? What prompted the transition from St Nickolas to Santa Claus? And what exactly is the significance of Boxing Day for those of us who aren’t British?

With honest and accurate remarks and a few snarky but well-meant and elegant comments, Mark Forsyth writes about misconceptions, misunderstandings, confusion, strange customs and the ever-lasting warmth of Christmas, no matter the era or the increasingly absurd marketing.

”If you ask me any simple question – ‘What’s the capital of France?’, ‘When does the last train leave?’, ‘Would you like a drink?’ – I can answer Paris, midnight and whiskey. But that is all dross. There is Something Else, something much more important, and I cannot tell you what that Something Else is; and if I could tell you, it would not be worth the telling. We cannot say it, but we can, somehow, do it. And we do it at Christmas.”