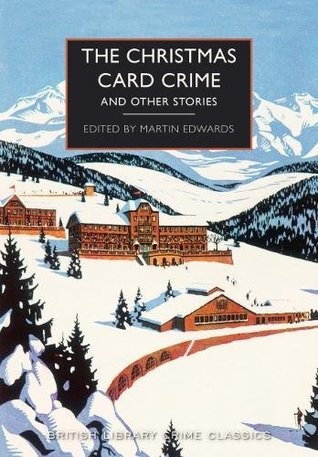 Title: The Christmas Card Crime and Other Stories

”Although one snowflake had already sifted past the lights, the great doors of the house stood open. It seemed less a snowflake than a shadow; for a bitter wind whipped after it, and the doors creaked. Inside, Rodney and Muriel Hunter could see a dingy, narrow hall paved in dull red tiles, with a Jacobean staircase at the rear. (At that time, of course, there was no dead woman lying inside.)”

Here I am, sounding like an awful broken record! Christmas is for classics, folklore, ghost stories, and mysteries. Lots of mysteries of the good, old times when quirky characters, quaint settings, and locked room crimes were enough to create perfect enigmas. You know, so unlike the contemporary ”mystery” novels.

British Library Crime Classics aims to reintroduce writers who were famous during the Golden Age of Crime and then fell into undeserved obscurity. This collection of crime stories set during Christmas is my introduction to the series and it is fabulous.

A Christmas Tragedy by Baroness Orczy: The vice of a young woman leads to persecution and awful repercussions.

By The Sword by Selwyn Jepson: An ambitious young man who is constantly feeding his obsessions with signs finds himself in the centre of a family curse.

The Christmas Card Game by Donald Stuart: The eponymous story is an ingenious tale of identity and deceit, set in a viciously freezing Christmas Eve in Bodmin Moor.

The Motive by Ronald Knox: A successful lawyer narrates a strange case set in a train. But nothing is as it seems…

Blind Man’s Hood by Carter Dickson: A haunting, atmospheric story set in an imposing estate, centered around obsession, secrecy, adultery and the ghosts of the past seeking justice. In my opinion, this is the finest story in the collection.

Sister Bessie or Your Old Leech by Cyril Hare: A story of the past we can’t leave behind, of pretense and blackmailing.

A Bit of Wire-Pulling by E.C.R.Lorac: A clever tale that reminded me of Christie’s finest moments.

Pattern of Revenge by John Bude: Two men vie for the same women and the consequences are devastating. A story set in Norway.

Crime at Lark Cottage by John Bingham: A man finds himself lost in a snowstorm and in the centre of a strange family dispute.

‘Twixt the Cup and the Lip by Julian Symons: Christmas shopping in Oxford Street and a cunning plan. And royal jewelry. Perfection.

This collection is perfect for the readers of British-style mysteries. Ghosts, strange footprints in the snow, mysterious estates, women and men with firm motives for murder, and a unique British Christmas atmosphere. Needless to say, I need to own the entire series…

”This was perfect December weather – crispy cold, the sun shining. Oxford Street was wearing its holiday decorations – enormous gold and silver coins from which depended ropes of pearls, diamonds, rubies, emeralds. When lighted up in the afternoon they looked pretty, although a little garish for Mr. Payne’s refined taste. But still, they had a certain symbolic feeling about them, and he smiled at them.”