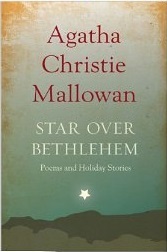 ”She thought of the pictures that had been shown her – of the agony in the garden of the shameful death, of a man who, at the hour of death, was forsaken of God, and she heard again the dreadful word Blasphemy…

And now, at this moment, the sleeping babe was pure and innocent and happy.”

Agatha Christie is full of surprises. Following her wonderful collection of paranormal mysteries, I thought there was nothing more I could discover about one of the most important literary minds. And yet, chance brought me this volume of stories and poems by the Queen of Crime. There is no crime in this collection, though, but a deep love for the jolliest season, poems honouring love, motherhood, womanhood and courage, and a few of the most beautiful, moving passages we’ll ever read.

”But the Crown seemed to be not gold, but Thorns (the donkey loved thorns and thistles – but it seemed the wrong thing for a Crown) and there was a smell he knew and feared – the smell of blood, and there was something on a sponge, bitter like the myrrh he had tasted in the stable…”

Star Over Bethlehem: A strange angel shows Mother Mary the future of Her Son and giver Her the choice of life or death. A haunting, terrifying story.

The Naughty Donkey: A very special donkey, watching over a very special infant, looking into His future, full of pain and glory.

The Water Bus: The story of an elderly lady who loved people unconditionally. Perhaps, a bit too much…A London tale of the reward for kindness.

In the Cool of the Evening: A beautiful tale of an extraordinary boy and his extremely unusual friend. Set in a world deeply affected by an accident in a nuclear power plant.

Promotion In The Highest: It is the beginning of the new millennium and the countries are governed by tyrants. 14 very important Saints decide that it is time to return to our world to lend a helping hand.

”I am Alpha and Omega, the first and the last…I am He that liveth and was dead; and behold, I am alive for evermore, Amen; and have the keys of hell and of death…Behold, I come quickly; and my reward is with me, to give every man according as his work shall be…”

The Island: On a peaceful island, the Virgin Mary lives with St John the Evangelist, reminiscing about the past, waiting to be reunited with Her Son. A tender story of motherhood, endurance and faith.

Ever seeking, ever sighing,

Through the night to noon,

I am he all lovers know!

Wandering through the world I go

In search of Columbine…”

A Masque From Italy: A beautiful tribute to the Commedia dell’Arte.

Agatha Christie’s poems are a tribute to tradition, history and to a number of very important female figures. There is a ballad about Isolt of Brittany, the second Isolt of the famous Arthurian legend, about Elizabeth I and St Beatrice, about Undine and the Fairy Queen in her land of Enchantment. Poems about the fallen young men of the First World War, about love and a peaceful picnic in 1960. About a haunted forest and Dartmoor. These are just a few extracts.

”Did you never fear, oh! mother of mine,

When you played on a King’s desire,

When first of a queenly rank you dreamed,

And subtly plotted and boldly schemed

To further your high design?

Did you never dread that the hand which crowned

Could cast you down in the mire,

That a love so swift might be swiftly drowned,

(And something that stirs in the wood),

Leaves that rustle and rise from the dead,

Branches that beckon and leer in the light

(And something that walks in the wood)

Skirting and whirling, the leaves are alive!

Driven by Death in a devilish dance!

Shrieking and swaying of terrified trees!

A wind that goes sobbing and shivering by

And Fear – naked Fear passes out of the wood!”

Down In the Wood

”I STILL not return again the way I came,

Back to the quiet country where the hills

And purple in the evenings, and the tors

Are grey and quiet, and the tall standing stones

Lead out across the moorland till they end

This collection is a necessary addition to our collection.You know, someone said that it is too old-fashioned and mellow. And one more time I wonder what exists inside certain people’s heads…

”Where now the incense? Where the kingly gold?

For Jesus only bitter myrrh and woe.

In pain and dying…How shall Mary know

That with His sigh ”’Tis finished”, all is told,

Then – in That moment – Christ’s reign has