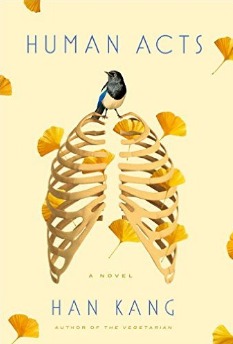 ”It’s the middle of the day, but the dim interior is more like evening’s dusky half-light. The coffins that have already been through the memorial service have been grouped neatly near the door, while at the foot of the large windows, each covered with a white cloth, lie the bodies of thirty-two people for whom no relatives have yet arrived to put them in their coffins. Next to each of their heads, a candle wedged into an empty drinks bottle flickers quietly.”

Gwangju, South Korea, 1980. The citizens react against the murder of university students by the military regime. The wave of resistance grows more powerful and soon the dictatorship is faced with a revolution. A fight for freedom and democracy for the people of South Korea. The death toll rises by the minute. The morgues and gyms are full of dead bodies, young and old, adults and children. They are carried away like rubbish, the prisons become Hell on Earth. Among the victims, a young man, a student with dreams and aspirations. He is our guide to a course of death, his voice full of melancholy and pain.

This is Han Kang’s tribute to the events that shaped her homeland. This is one of the most powerful novels you’ll ever have the blessing to read…

‘’Suddenly it occurs to you to wonder, when the body dies, what happens to the soul? How long does it linger by the side of its former home?’’

There is no respect for the living and the dead. Corpses are purposefully abused to become impossible to be recognized. They are loaded into garbage trucks and taken to a mass grave. The regime has eliminated every trace of dignity and justice. Rapes, beatings, torture to the point where you consider those who have died to be incredibly fortunate. The survivors of the atrocities find themselves in limbo. How can you go on living? What has life become following blind hatred and massacre? What is left to keep you going?

”After you were lost to us, all our hours declined into evening. Evening are our streets and our houses. In this half-light that no longer darkens nor lightens, we eat, and walk, and sleep.”

Dong-ho is the focal point of the novel. By his side, his best friend who cannot escape the darkness, a woman who works as an editor and is threatened by the regime that venerates censorship, a prisoner who leads us into the hellish quarters, a former factory worker who struggles to recover from her traumas, and Dong-ho’s mother who tries to grasp the terrifying reality that destroyed her world. These voices form a Chorus that narrates a dark tale of the cruelty that human beings are capable of. Unadulterated, shameless, merciless cruelty to impose their power and twisted ambitions.

”After you died, I could not hold a funeral. And so my life became a funeral.”

Why Dong-ho? Because he is one of us, a young student who wanted to decide his own future in a free land. There are no leaders or warriors of fairytales in real life but fighters on a daily basis, simple citizens who demanded freedom. These are the true heroes. Dong-ho becomes a symbol, a beacon in a country covered by darkness. He is one of the thousands of victims of totalitarianism coming from all sides. Left, right, it doesn’t matter. They are the two faces of the same tarnished coin. Danger and violence don’t recognize ”sides”. It is we who create poles and divide. And this is why History repeats itself. Because we separate violence to ”left and right”, forgetting that there is no difference between two evils. But hey, populists need to ”earn” the daily bread, right?

To speak in literary terms for this novel would be an affront to the impact of the subject matter and Han Kang needs no introductions. Within moments of serenity and beauty, there are scenes of unbearable cruelty and raw violence. And this is how it should be, in my opinion. Novels such as this need to be merciless. To turn our eyes away because of content that is ”hard to read” is to turn a blind eye to the wounds that have been plaguing mankind for far too long. Let us live in a bubble and in safety…Let us be ignorant…

There are a few passages that are impossible to be described accurately. The writing is transcendental and the second-person perspective is the proper vehicle to engage the readers and hold them tightly in a nightmarish dance to pure horror. That is if the readers are willing to dig deeper into their souls and come face-to-face with acts that can only be committed by the most violent animal in God’s creation. The human. Han Kang’s Epilogue is a masterpiece in itself.

I will use the clichée I hate and say that this novel should be required reading to every university in the world, in a futile hope to prevent the eternal circle of violence coming from all sides…

”Forgive us our trespasses, as we forgive those who trespass against us.

I forgive no one, and no one forgives me.”