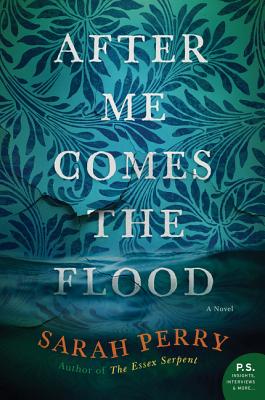 Title: After Me Comes The Flood

”What surprises me isn’t that we sin, but that we manage a single good action in all of our lives.”

A strange array of people has gathered in a cottage in the marshlands. An endless heatwave and the unbearable drought create a suffocating atmosphere that gives rise to the boiling conflicts between the members of the fellowship. One of them is John Cole, an enigmatic Londoner, who has found himself in the wrong place at the wrong time. Who are these people? Why are they there, battling a cruel summer and each other? What is the story of the houses and why does John feel watched and threatened?

”I’ve been listening for footsteps on the stairs or voices in the garden, but there’s only the sound of a household keeping quiet.”

This is the debut novel of Sarah Perry, the astonishing writer who has given us the beautiful The Essex Serpent and the inimitable, shuttering Melmoth. As always, Perry’s story is woven in rich atmosphere and symbolism. There is an eerie quietness and the ”heavy” feeling of rain that never comes. A strange name appears everywhere and must not be uttered. Questions of identity, secret desires, hallucinating dreams. Everyone’s minds are occupied by a nameless threat that is lurking and the fear of a flood permeates the story. With a dreamy combination of an underlying sexuality and themes of Religion, Perry creates a novel that requires patience, dedication and a certain clarity of mind.

”Where is the horse gone”, she read. ”Where the rider…” ”…and where the giver of treasure…”

”Someone had broken the spine of a book and left it open on the lawn, and near the windows rosebushes had withered back to stumps. A ginger cat with weeping eyes was stretched out in the shade between them, panting in the sun.”

I won’t insult your intelligence by being Miss Obvious, stating what a unique writer Sarah Perry is. This is universally acknowledged. She has taken all the characteristics of British Mystery and the effect of the atmospheric marshlands to compose a story where paranoia and seduction are highlighted by strange bird cries, fleeting visions of a woman in black and a door that must remain closed. In rich symbolism and Gothic motifs, Perry paints a story where no one moves for fear of revealing themselves and their motives.

”When I was young, it used to frighten me- I didn’t think a painting should look at me like that. Sometimes I’d stand directly in front of it, and see my own reflected face laid over hers, and I would wonder which of us was painted, and who was watching whom”

”I gave my love an apple, I

gave my love a pear;

I gave my love a kiss on the

And threw him down the

Many thanks to Custom House and Edelweiss for the ARC in exchange for an honest review.