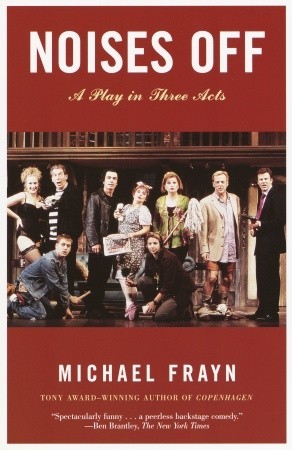 A famous actress who has invested her money in an upcoming comedy, with a penchant for younger men.

A young actor who has taken advantage of the aforementioned star.

An actress who tries to take care of everyone and everything and looks for a chance to capture the heart of the handsome actor who has just been made available.

The aforementioned handsome actor who is not the sharpest knife in the drawer. Also, he might just get a bit too sensitive at the sight of blood.

A young actress who has used questionable means to get the part and is half-blind without her contact lenses. Which she loses often. Too often. And on stage.

An elderly actor who loves drinking. And there is definitely something wrong with his hearing.

A miserable Stage Manager who hasn’t mastered the art of appearing in multiple places at the same time.

An overly patient and understanding Assistant Stage Manager and understudy of the female roles who must have had enough of the director’s madness.

And, naturally, the director of the play who tries to make some sense of his choice to meddle with Theatre and with actors.

An acute, hilarious and outrageously clever glance in three Acts, behind the curtains during the technical rehearsal, a Wednesday matinée when nothing works as it should and one of the final shows of the ten-week run. The world of the touring actors is a tough one, especially where love and jealousy are involved and one of the finest Contemporary British comedies, brilliantly depicted in the 1992 film version.

‘’I’m just God, Belinda, love. I’m just the one with the English degree. I don’t *know* anything.