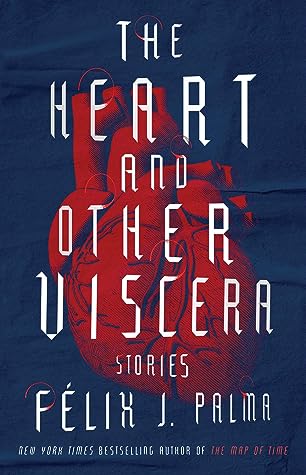 Title: The Heart and Other Viscera: Stories

”At that time of evening, the playground resembled a childhood graveyard. The swings creaked mournfully in the breeze, the slide rose toward the moon like an abrupt, useless object, and the crisscrossed bars of the climbing frame traced the skeleton of an impossible dinosaur.”

The heart. The mechanism on which our entire existence depends. The pumping muscle that keeps us alive in more ways than one. The source of our being, the mysterious treasure chest that causes us to fall in love on the road of happiness or suffering. The heart that breaks, so strong and yet so fragile, the trigger of joy and despair, the well of weakness when our defenses are down and we end up allowing others to hurt us.

In 12 stories, Felix J. Palma elevates the feelings of despair, love, hate and the themes of abuse, obsession, and sacrifice to a whole new level. At their centre, the heart dictates like a ruthless commander and the characters obey because what else is left to do?

These are my favourite moments in the collection:

Roses Against the Wind: A story that takes you on a journey around the world only to let you realise that it easily becomes a terribly sad destination…

The Snow Globe: A young man finds himself in the middle of a tragic family story, trying to console a grieving mother who has formed a life within a snow globe.

The Land of the Dolls: A young father attempts to console his daughter over the loss of her favourite doll by writing letters, in the shadow of his horrible wife. A poignant story with references to Kafka and an astonishing closure which I simply adored. I have no mercy for women who abandon their children. They deserve all the punishment in the world.

Little Furry Animals: A sinister story of a despicable man who is stalking a young woman.

The Brave Anaesthetist: A woman narrates a strange fairy tale to her daughter. It is a story about a man who killed people to bring them back to life, about a coward who manipulated ignorant women who were weak and insecure and willing enough to fall for his convenient lies.

Meows: A strange man, a wailing cat, and a disappearance. A very interesting story on the bond between humans and animals and the concept of reincarnation.

The Violinist on the Roof: The story of a young boy and a melancholic violinist, set in Brooklyn in a more innocent era when moral values and compassion hadn’t died yet.

The Man Behind the Curtain: A family decides to live in a beautiful house. However, there is a slight problem. The house comes furnished with a man standing behind a curtain and he’s definitely not living.

The Heart and Other Viscera: A man cuts himself to pieces as a gift to the woman he loves. Literally. And then he commits the ultimate act of sacrifice. This story is pure 5-star material.

Magical Realism, Gothic Fiction, Horror, Speculative Fiction. The finest elements of these powerful literary worlds are woven in this collection. Morbid, raw, provocative, these stories will haunt you for a long time…

”We don’t live in the calm, rational universe where forgotten dolls remain where we left the, but in the neighbouring universe, that cruel domain governed by wars, brutality and uncertainty, where orphaned objects instantly disappear, possibly because, unbeknownst to us, the things we forget go to make up the dowry we will possess in that other world.”