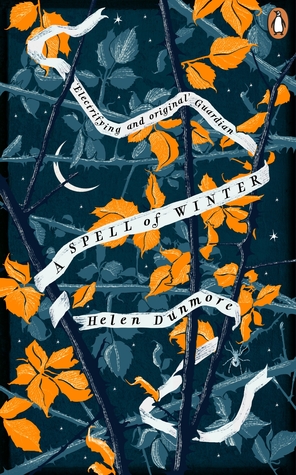 Title: A Spell of Winter

‘’They were bringing my uncle Joseph down the stairs. Narrow, twisty stairs they put in houses where they’d given no thought to the living or the dead. You couldn’t get a coffin up them.’’

Helen Dunmore needs no introductions. Taken from us too soon, she produced a number of the most unique and humane literary treasures in Contemporary British Literature. Having read most of her work, do I dare that A Spell Of Winter is her finest novel? I think I do…

‘’Thinking of people when they’re not there – it’s one of life’s great pleasures, isn’t it?’’

Cathy and Rob have grown up practically without their parents. Their father was defeated by the ordeal caused by his wife’s decision to leave him and their children. In the shadow of their strict grandfather, the siblings have made their home in a foreboding estate where winter is both a harsh opponent and an unlikely ally in the protection of their secret. For secrets are their only way to cope with the cruel hand they have been dealt with. Rob and Cathy have become one person, one soul and separating them is impossible and dangerous. The world is against them, the frost and snow are silent witnesses in the unfolding drama of a family broken and doomed, dancing in the tune of Solitude, in a land where absences are Furies taunting children.

Dunmore focuses on a number of difficult and controversial issues centered on incest and mental disorder. Cathy and Rob ignore the world and try to survive within the premises of a dangerously secluded life. The land is freezing and claustrophobic. The frosted windows, the cold stones, everything around them is silent and white, hiding passions and ordeals. Choices and faults form a dangerous dynamic in a setting that seems stuck in time while the shadow of the impending, turbulent years draw Rob and Cathy closer and yet further apart.

‘’It is winter in the house. This morning the ice on my basin of water is so thick I cannot break it. The windows stare back at me, blind with frost.’’

The setting is outstanding, the prose mesmerizing, the dialogue is a true showcase of literary quality (which is hard to find nowadays…) and a blessing for the reader. The wintry setting draws you into an icy grip, cold and merciless, like Cathy’s wrath and sense of justice. You can see her, looking out of the window, in a landscape covered with snow, trying to defeat her demons. Cathy and Rob’s relationship may be controversial but a) controversial is my middle name, and b) Dunmore knows how to turn even the ugliest aspects of her themes into works of Art. I felt as if I was reading a darker, more twisted version of Catherine and Heathcliff, a semi-contemporary Wuthering Heights with its Gothic undertones, feverish secrets, and forbidden attractions. Cathy is one of the most memorable characters, her thoughts, and personality deeply related to my personal understanding of society and its inhabitants. Needless to say, I loved her.

Beware, though. If you choose this book expecting a Gothic thriller, you will be disappointed. It may fall into the Gothic genre- broadly speaking- because of its British estate setting, the winter background and the secluded life of the characters but A Spell of Winter is so much more than a copy-cat of Victorian classics. It is the story of two souls condemned by the mistakes of their family and the personal journey of a young woman who refused to obey.

‘’Outside the wind snatches at my skirt. Sand is blowing up from the low dunes and whisking across the grass. No one will hear us coming.’’