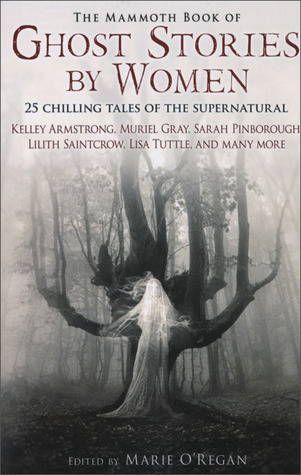 Title: The Mammoth Book of Ghost Stories by Women

”Although the stories vary from tales of ghostly children to those of lost pets, from murder to accidental death, from rage to sorrow and back again, one thing is central to all: a slight chilling of the skin as you read. A feeling of something being not quite there but rather just behind you, ready to make itself known, and leaving you reluctant to turn out the light.”

Continuing with appropriate autumn reads, in mood for this year’s Halloween, I chose a collection that has long been on my TBR. A volume containing 25 ghostly tales, written by women, populated with sad ghosts, spirits looking for retribution, Gothic mansions, abandoned chapels, spectres of a life forgotten. These are my personal favourites:

”Cathedral was the Lord’s House, he told himself. It was not to be slighted by spirits. A cold wind blew in from the direction of the altar. The stonemasons would later tell their families it was a change in the air which first alerted them to the mummers’ presence. Hanging off precipices many fett up, the men detected a country aroma. Their minds turned to hay ricks, windfalls, smoking jam kettles and bonfires.”

Field of the Dead by Kim Lakin-Smith: A story with all the quintessential characteristics of British Gothic. A haunted Cathedral, a haunted inn, a confused young priest, a summer Autumn Eve, children’s ghosts, poltergeists. Imagine The Sixth Sense, The Woman In Black, The Conjuring and Supernatural combined in a story. This is perfection.

”It was a dull grey evening, early in November; the student’s reading-lamp was lighted, but the shutters were not yet shut, not the curtains drawn. He could see the leaden sky outside his window, the fir-tree tops tossing in the angry wind. He could hear the wintry blast whistling amidst the gables before it rushed off seaward with a savage haul.”

The Shadow In The Corner by Mary Elizabeth Braddon: A young woman finds herself in a scholar’s estate and has to put up with a strange presence and an even more frightening and infinitely cruel old man. A very atmospheric and very sad story.

”She had an especial liking for yellow roses, and for mulled cider, as well, and late autumn, and the inscriptions she finds carved on slate headstones when she walks between the rows of Copp’s Hill.”

The Madam of the Narrow Houses by Caitlin R. Kiernan: A haunting, sensual story of a woman who has the gift (or the curse) to converse with ghosts.

The Lost Ghost by Mary E. Wilkins-Freeman: A sad story of a young girl who is looking for a mother and three brave women.

The Ninth Witch by Sarah Langan: A visceral story about a witch, her daughters and the cruelty of men, set in pagan times. Outstanding is too weak a word for this one.

”Don’t fight, they told her. The alternative is almost always worse than what you already have.”

”Sister, Shhh…” by Elizabeth Massie: A girl who tries to escape a community where polygamy = rape are practiced and a young who had an abortion meet in a hotel room. A story of injustice, cruelty and revenge.

”Before the last echoes of the bell had faded, music began to play from somewhere within the house. Softly at first, and muffled, as if coming to her through a dense fog, so that Chloe had to strain to hear it, but gradually becoming louder and clearer until each sad, sweet not was crystal perfect. It was the aria from the second act of Giselle, when the grief-stricken duke mourns at the tomb of the girl he has himself driven to madness and death.”

”On one occasion, on the exact stroke of midnight, Chloe looked from one of the windows and saw white shapes flitting between the trees at the end of the garden, She was certain they were wilis- the female spirits described in the ballet as risen from their graves at night, to seek revenge upon men by dancing them to death.”

The Fifth Bedroom by Alex Bell: This is how stories on haunted houses should be written. This is how you depict the bond between two women that are divided by decades and united in injustice and cruelty. This is how you create an atmosphere of dread and sadness.

Seeing Nancy by Nina Allan: I don’t know what to say about this story…It goes beyond everything we know about hauntings, restless souls and past crimes. Nina Allan is an extraordinary writer and this tale is among the jewels of the collection.

Return by Yvonne Navaro: A dead girl returns to a family full of perversion, selfishness, and utter cruelty. A raw story full of trigger warnings (rape, substance use, and psychological extortion).

Forget Us Not by Nancy Kilpatrick: A winter’s tale of a love that has died and a strange cat, set in Montreal.

God Grant That She Lye Still by Cynthia Asquith: An old-fashioned story of past lives and loves, with a distinctive Gothic feel and a few well-placed traces of Wuthering Heights.

The Phantom Coach by Amelia B. Edwards: A haunting, darkly picturesque story of the Dead Cart, set in the moors.

The Old Nurse’s Story by Elizabeth Gaskell: A foreboding estate full of spirits and secrets in a classic Gothic story.

Among the Shoals Forever by Gail Z.Martin: Pirates, necromancers, vampires, beautiful ghosts, powerful cameos in a story set in Charleston.

Afterword by Edith Wharton: How far would you go to have your very own ghost?

Most collections of this genre are a mixed bag and this is no exception. There are a few true gems, many atmospheric stories and a couple that belonged to the trash bin, unworthy to be found in a collection that includes Wharton and Gaskell. However, every reader and lover of ghost stories will find many things to appreciate here and this is a volume that definitely deserves a spot among our Halloween reads.