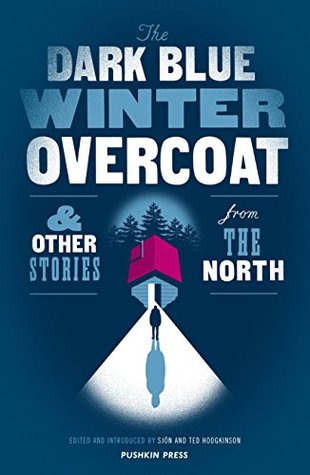 Title: The Dark Blue Winter Overcoat & Other Stories from the North

”The wind buffeted me, blowing warm, dry air into my face. He’s here, it said. The one you love is waiting for you. You’ve arrived now. You must find the hall where he lies in a casket. Go past the planes and the hangars, pay no heed to their gaping mouth through which the people surge and vanish.”

When it comes to Nordic Literature, it is probable that our minds form images of gloomy characters burdened with an awful lot of extreme existential crisis, long nights in cities where crimes take place in the shadows, investigated by alcoholic detectives. And yet, these are literary stereotypes linked to the Nordic Noir genre. Which is fine but it is not what Literature is about. Nordic Literature is haunting, raw, full of twilight and sunny birch forests, snow and endless sunlight and brave depictions of the complexity of human psychology.

This collection does one thing right. The stories are free from the aforementioned stereotypes and represent the themes and settings influenced by the landscape of the Nordic countries and the mentality of their citizens. The problems I faced are related to the quality of writing and the presentation of the themes brought into focus. In my opinion, these are the finest moments in this anthology:

The White-Bear King Valemon by Linda Boström Knausgård (Sweden), translated by Martin Aitken: A haunting, contemporary fable based on a well-known Nordic fairy tale and a tragic version of the myth of Eros and Psyche.

The Dark Blue Winter Overcoat by Johan Bargum (Finland), translated by Sarah Pollard: A young man travels to New York to visit his father. The cultural shock of leaving Finland is almost unbearable and his father has turned into a dog. Yes, don’t ask…I can’t say I actually liked this story but it was definitely one of the strangest musings I’ve ever read.

From Ice by Ulla-Lena Lundberg (Åland Islands), translated by Thomas Teal: A haunting, melancholic extract of a novel I need to read soon. Memories of totalitarianism and the struggle to adjust to a new, free society.

”If I let her die, I would end her suffering, and I have no wish to help her. Let her suffer. Ler her battle her own shitty life. When she can no longer handle it, when she finally gives up, then she can end her life herself. I will not help her.”

From Zombieland by Sørine Steenholdt (Greenland), translated by Jane Graham: A young woman, daughter to a monster of a mother, remembers the moments that marked her life in the wake of her mother’s death. Her story is linked to another highly dysfunctional mother-daughter relationship. Be extremely careful with this one. It contains triggers for alcoholism, sexual and psychological abuse, and murder. Another collection that calls my name, even though I was terrified and broken by the 20-pages extract.

1974 by Frode Grytten (Norway), translated by Diane Oatley: A story that starts as a teenage Midsummer’s days chronicle becomes something much more depressing and sinister.

In my humble opinion, the problem with this collection is related to the selection itself, the quality throughout is extremely uneven. There is cheap emphasis on sex, an excessive amount of swearing. There were stories that read like little masterpieces, three stories that didn’t make sense at all and others (quite a few, actually…) that belonged to another kind of anthology.

Needless to say, I had high hopes for this collection. It didn’t manage to move me, apart from a few moments and although it depicts the haunted, secretive almost claustrophobic atmosphere of Nordic Literature, I felt that the result was merely average and in need of a purpose. Being ”dark” and shocking just for the concept’s sake means very little. 3 stars because of three astonishing stories. And that’s about it.

”I could scream, I could fight against it, I could bite, I could kick, and I would do anything to protect myself. No one was ever going to break me.”

Many thanks to Pushkin Press and Edelweiss for the ARC in exchange for an honest review.