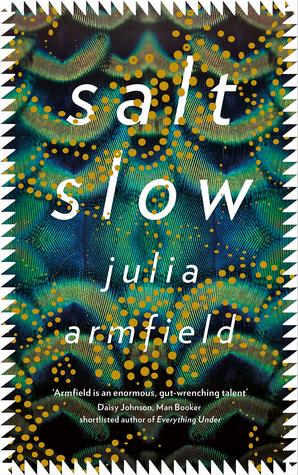 ‘’At night, I fall asleep in shreddings and tatterings, my dreams shot through with shouts of violence, bitter notches like bad beads on a rosary. In the still-dark of early morning, I wake to wonder at my face in the wardrobe mirror. Beneath the white flesh of my forehead, my eyes seem further apart from before.’’

I cannot do justice to this collection. Not in the slightest. I cannot put my admiration, my love for it into words. Nine stories that haunted me, nine characters that became strange friends, nine texts – what a poor word for this masterpiece- that represent worlds that are exciting, frightening, captivating. And extremely humane and real. That is what I loved more in Salt Slow/. Even though this collection is the finest example of Magical Realism, the situations and themes are extremely approachable and relevant.

In flawless dialogue and prose of impeccable beauty, Julia Armfield narrates stories of womanhood and change, of fear and identity, danger and love, fulfillment and doubts. She writes about visceral concepts and succeeds in creating a language that is ruthless and yet, full of beauty. Daily themes are mixed with concepts that fall in the genres of Magical Realism and Gothic Fiction and produce a collection that leaves the reader in awe over how beautiful and terrifying Literature can be when done right.

Sickness and insomnia become symbols for alertness, sadness and fear. Subliminal messages through music can lead to a terrifying uprising. Women decide to create what they cannot find, disappointment over a wasted love leads to the sea. Students, artists, everyday people, settled down or wandering, strange cities, eerie phenomena are the ingredients of nine superbly crafted stories.

Mantis: A girl afflicted with a strange skin disease chronicles her days in a Catholic school until the frightening culmination. A story about the obsession of appearance, teenage troubles, and desires. Haunting and terrifying.

‘’When I was twenty-seven, my Sleep stepped out of me like a passenger from a train carriage, looked around my room for several seconds, then sat down in the chair beside my bed.’’

The Great Awake: A strange phenomenon causes the majority of the citizens of a picturesque city to become insomniac. Each Sleep becomes an unwanted guest. Are these weird being representations of certain aspects of their vessels? What do they want? A story that should be read in the company of a Chopin Nocturne, a tale that may seem comically absurd but it is actually eerie and extremely atmospheric. Possibly the finest ‘’chapter’’ in this perfect collection.

‘’When the neighbours called to complain about the smell, Miriam told them with great dignity that we were purging ourselves of evil spirits.

“Well, I’m sorry that you’ve had to close your windows, Mrs Adams, but that’s the price one pays for catharsis.’’ ‘’

The Collectables: A coven of young witches, disappointed by their boyfriends, decide to create the perfect man (made of human parts, obviously…). A funny and elegant tale that reminded me of classic 70s British Horror movies like The Asylum starring Robert Powell c.1972., with an absolute shocker closure.

‘’When the woman who lived across the street from us adopted a wolf and brought it to live with her, people were not as surprised as you might imagine.’’

Formerly Feral: A woman adopts a wolf. What happens when the animal acquires the status of a daughter? Themes of transformation, domestic supremacy, abuse towards girls with pathetic sex-crazed boys as the culprits (we see this in Goodreads lately….). A strange, poignant story graced with astonishing imagery.

Stop Your Women’s Ears With Wax: A filmmaker finds herself in the centre of the severe impact of a strange girl band on teenage girls while touring the UK. Impossible to summarize, this story is one of the most powerful, darkest pieces of writing I’ve ever read, with a strong underlying commentary on manipulation, violence, sexualization, and feminism.

‘’Morning sky, gasp of purple, like the dark part at the back of a throat. Day like a swallow. Promise of snow.

‘’The snow settles – city pressed in clay. You can feel the confusion, a tightening of formerly unsolid things. Ice on car windows, difficult breath.’’

Granite: The only way I can describe this story is by guiding you through my feelings while I was reading. First pages: ‘’What a lovely heroine…I can definitely relate to her thoughts.’’ Then: ‘’This is such a beautiful relationship…’’. And what followed was a mixture of nervousness, anticipation, fear until the striking ending. If this story ever became a novel, it would be the best modern retelling of an ancient Greek myth.

Smack: A jellyfish becomes the metaphor of a broken marriage and a woman’s sadness and isolation. Beautiful summery setting for a bleak, bitter story.

‘’My mother had always told me it was better not to answer the door between midnight and three a.m. “Strange neighbourhood” , she would say, sounding more paranoid than she meant to, “ buy a dead- bolt, keep your curtain shut.”

Cassandra After: Eerie atmosphere with references to the Folklore of Death, right from the first paragraphs. A ghost story that is in turns humorous and tender, with commentary on sexuality and acceptance.

‘’On nights like this, she finds she thinks of her mother at Christmas, reading to her from Under Milk Wood: the wide waters and moonless nights, “starless and bible-black”, the deep dark falls and despairs and seas of people’s dreams.’’

Salt Slow: A couple in a boat in the middle of nowhere, in a flooded world that approaches its end, has to fight with sea monsters and a dark past. A story that combines Dystopian Fiction, Sci-Fi, ancient sea legends and motherhood.

‘’[..] the wrongs CDs in CD cases, the broken mirrors and messages written on steamed-up shower glass, the never-ending swooning, crooning sounds at night. In each case, they had been miniature hauntings – whispered lyrics, songs playing on unplugged radios [..] ‘’