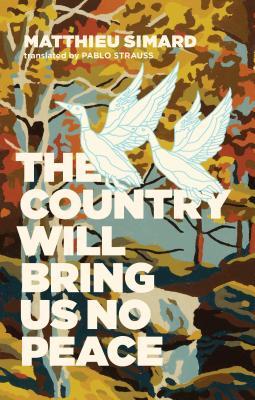 Title: The Country Will Bring Us No Peace (originaI title Ici, ailleurs)

‘’The silence came down on us like rain one Thursday, and we spent years submerged in it. The birds fell silent and rusty hinges stopped squeaking and no children hollered in the schoolyard. The passenger-side car speaker died; dead leaves ceased to rustle in the wind. Just silence. That was three years ago, far from here. We’ve weathered hundreds of storms since then. And each time she’s been there to rap me on the shoulder and remind me of the day before. Forty years from now there will be nothing left of us. Our memory and the photographs and the recollections of those who disappeared will all be gone, like the notes from an old cello in the ruins of an old house.’’

Nature often becomes our escape. Sometimes, it is our only hope for change, rebirth even. This is the plan of Marie and Simon, the couple that abandons the city for a small rural community, hoping for a change that will result in a miracle: the conception of a child. But the country isn’t always hospitable and the community they’ve found themselves a part of is strange, its residents cold and secretive. Simon and Marie have to tread carefully.

‘’Every town has its stories. Dark secrets, accidents, disappearances.’’

Simard constructs the atmosphere of the community masterfully. Birds cannot be heard. If they exist somewhere within the premises of the village, they have chosen to remain silent. The sunlight disappears throughout the summer days, creating a gloomy, claustrophobic atmosphere. There are secrets concerning the previous owner of our couple’s house. A park where ‘’bad’’ things happen, a path leading to a dark forest. A mysterious girl, a legend that speaks of lost children. And an antenna is looming over the community, like a pagan god made of steel, watching the residents, willing them to disappear.

‘’We tell ourselves lies in order to survive. Trade them, like kids with their old toys.’’

‘’Peace is a momentary void between two conflicts.’’

An overwhelming, foreboding feeling grips the reader’s heart from the very first pages of this extraordinary novel. Secrets start being uncovered gradually and the effect is shocking and as painful as a sudden punch in the stomach. The feeling of dread starts growing and growing and the mind tries to predict what’s coming next. A dozen scenarios hovering inside the brain and none of them is optimistic.

Darkness doesn’t exist only within the community. There are too many shadows inside Simon and Marie, two kind, gentle people who were treated viciously by fate and struggle to defeat the ghosts lurking in the corners. There is such a stark contrast between the awful Lavoies and our couple that highlights the difference between an elitist, materialistic society that demands open doors and pool parties and the need for simplicity and personal space, lost in the age of social media idiocy and the lack of understanding the notion of the different opinion. Simard comments on the results of industrialization and progress built on feet made of clay, the madness of obligatory socializing and invasion of privacy. But most importantly, he poignantly demonstrates that sometimes the past is so much stronger than us.

With an ending that is an absolute shocker, this novel is everything today’s Literature has to be and is often lost in commercial choices where quality is compromised. It is a revelation, a dark jewel. A haunting presence.

‘’In the murky moonlight I feel the short-trimmed grass tickling my toes. Or maybe it’s the ants. It’s dark in the shed. Shadows and reflections are all I can see. I’m alone.’’

Many thanks to Coach House Books and NetGalley for the ARC in exchange for an honest review.