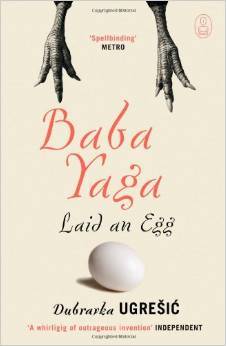 ‘’Sweet little old ladies. At first you don’t see them. And then, there they are, on the tram, at the post office, in the shop, at the doctor’s surgery, on the street, there is one, there is another, there is a fourth over there, a fifth, a sixth, how could there be so many of them all at once?’’

Having read Fox, which proved to be a religiously profound experience, I couldn’t wait to get my hands on another Ugrešić book. This one tempted me with its title and folklore and whatnot and I was certain I would adore it. But. My hopes were crushed under the boot of inexplicably offensive writing and a few of the most trashy chapters I’ve ever read.

Baba Yaga Laid An Egg can be seen as an interesting combination of autobiography, Fiction, and pseudo-folklore research. Part One is the reason I finished the book and it is a great token of Ugrešić’s writing shining in all its glory. A mother is fighting against Alzheimer’s and a daughter is giving herself to helping and protecting her. These chapters are a hymn to mother-daughter relationship and love, and the strength of the human soul that refuses to let go. There are instances that seem funny but deep down they are actually bittersweet.  Ugrešić takes a daily act, like setting the table or cooking and graces it with literary value, immediacy, and beauty. The trip in Bulgaria provides the chance for some of the most lyrical paragraphs. ‘’A powerful storm blew in. I watched through the window as the wind snapped the tree branches. While plastic bags flitted through the air like little phantoms. The rain whipped the windowpane so powerfully it seemed likely to smash the glass.’’

Part Two is taking place in a hotel spa and three elderly women are our protagonists, along with three men who are given secondary parts. Thank God. Here, the theme of growing old and retaining your dignity in addition to the ways old age is perceived by society is in full swing and masterfully depicted. There is an elegant, sassy kind of humour, there are references to Art and to Pushkin’s poem Ruslan and Lyudmila and the narration is properly darkened by a very pragmatic view on the conflicts during the 90s and a heartbreaking narration of the nightmare of the persecution and, eventually, the genocide against Serbs, Jews and Roma by the Ustaše monsters during the years of the Nazi puppet NDH between 1941 and 1945.

And in Part Two we find Disaster No.1…

His name? Mevlo or something like that. Who cares? Now, this was the epitome of disgusting. A misogynist, a brute, the personification of filth. I skipped every page that ”contained” him and his insufferable musings. Too bad the bomb didn’t find its target. Actually, I pity the bomb that had to fall on such a trashy character. One star flew away with quality…

And now, Disaster No2…

Part Three. I suppose it aimed to demonstrate and explain the cultural treasure of Slavic Folklore in relation to witches but many parts were extremely problematic. Scratch that, it’s too gentle. In fact, it proved to be a nightmare. The narrator is supposed to be a man, so this may explain the fixation an explaining 70% of the myths through sex and penis references but ut was rude and, in a few cases, extremely inaccurate. The interesting information was very few and far between.

There was an interesting fable from Crna Gora (Montenegro) about an old witch that gave shelter to Jesus, information on the origins of the word ‘’Baba’’ and the Baba Yaga figure. The reader learns of the Baba Korizma – the Lent- that walks with seven sticks, throwing away a stick for every week of fasting. This is a Serbian tradition and we also have a similar custom in Greece. Snowy days in March are called ‘’baba’s days’’, and her belt is a metaphor for the rainbow. There is much information on similar witches in World Mythology e.g. The Befana, widely loved in Italy, Baubo, the old woman who made the goddess Demeter laugh, and a mention of The Feather of Finist the Grey Falcon which is one my favourite Russian tales.

References to potential symptoms of autism in relation to the myth of Baba Yaga is ridiculous, to say the least. Blood transfusion is compared to the belief that witches drink blood. Every symbolism is seen through castration fantasies and pseudo-Freudian syndromes, which is wrong. Plain and simple and outrageously so. The traditional Chinese belief of the footsteps of the gods on rocks has nothing to do with a ‘’ missing penis’’ (my friend who lives in China would like a word with the supposed ‘’writer’’ of the section…) and by that point, I was positively and irreversibly disgusted. The heroes of the fairy tales became…’’ guys’’. Yes, it’s not a football team.

The images of the statues of the Virgin Mary are compared to Paris Hilton.

I am speechless. Here, have one more Sherlock gif:

How could this come from Ugrešić’ pen? And yes, dear writer, you’re an atheist. We get that. I don’t care. I respect your decision. But insulting the readers who believe is WRONG. I will stress this every time I find a book that offends me as a person. I pray to a male God who taught love and compassion. Forgive me for not sacrificing newborns to a dark goddess. I am an old-fashioned heathen who believes in a higher power. I always have, I always will. Me and millions of other human beings.

If the writer had chosen to expand Part One this would have been a beloved book of mine. Even if the book had ended with Part Two, I would have thought of it as an absolutely satisfying reading experience. But Part Three was a catastrophe. And offensive, absurd array of disjointed drivel. I cannot believe I am giving this rating to a book by  Ugrešić but in truth, this was a one-star for me. So two stars seem generous…