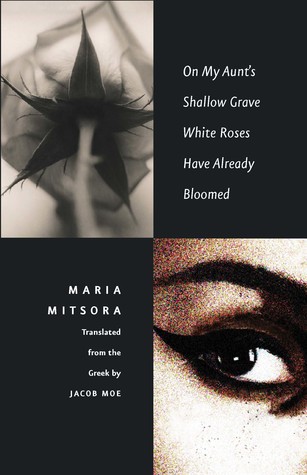 ‘’My tutor lived in a beautiful pinkstone house, enveloped in bougainvillea vines. I had heard a few things about his life story; I knew that his English wife had dropped dead descending the stairs during an evening ball. There was a back garden growing wildly, used as headquarters by a gang of crows. I never caught a glimpse of the rest of the house; I only ever got to see his study with its wall-length bookcases and wood-burning stove.’’

Enter a world where darkness meets light. Where a modern, buzzing metropolis like Athens becomes a hideaway for witches, shapeshifters, humans who cannot escape their ghosts. In a scenery where small corners of beauty become the scenery for a battle between myth and reality, the way to fulfillment, the influence of tradition, the labyrinth of the past. Sixteen stories rich in dark imagery and strange characters, set primarily in Athens, by an astonishing writer who should have been much more well-known in my country. But I suppose this genre is not exactly approachable. Anyway…The following are my favourite stories from the collection.

‘’I fell in love with the English language by the glow of the fire, feeling the presence of a ghost in a long white gown, hearing the panicky voice made by the wings of a bird which once got caught in the stove’s metal pipes. Maybe I was also influenced by an expression I learned:  ‘’A murder of crows.’’

The Bee Is On the Tree: A beautiful Introduction on the writer’s love for language, writing and discovery.

The Cat That Can’t Dance: A stalker of the creepiest kind us obsessed with a red-haired girl. However, this young lady is full of surprises…A rather heart-pounding story, rich in urban scenery, with a striking ending.

‘’The bells of hell ring in unison. Abandoning the inanimate mermaid on the threshold of sleep, he pulls the blanket off his head. Outside the window the sky is still dark. The hell keeps ringing.’’

From the Waist Down: A writer is trapped in an unhealthy relationship with a strange woman. What makes this story powerful is everything that’s left unsaid.

‘’Climbing further up the hill, they breathed in the silent sleep of the pines, the eucalyptus, and the cypress trees. Suddenly, from within a cluster of immortal cacti, they saw the planetarium’s metallic cap at their feet, transforming the twilight to a celebration. Behind them, on the horizon, they guessed at the expense of the sea. The Acropolis stood front and center, beyond it the hills and mountains of Lycabettus and Hymettos. On the other side, Mount Penteli, and still further the ridge of Egaleo, where Xarxes had once watched his defeat in the naval battle of Salamis.’’

Downtown Athens, a Love Affair in the Underworld: This story, like the extract above, can be fully appreciated by someone who calls Athens ‘’home’’ or who has lived enough to know the various landscapes she describes. First of all, the reference to Krinos, a very popular patisserie, famous for its Greek pancakes, located in one of the most central squares of the city, bought back childhood memories when everything was simple and pure and free of danger. This story pays homage to the historic centre of Athens and it is a journey in itself, even though I live in the heart of the capital. A tale of love through the centuries, as old as Athens itself.

The Suzani and the Scooter: An eerie summer night, during the commemoration of St. John the Baptist, a day related to some very obscure and mystical traditions. A teenage boy meets a strange girl. Witches, potential vampires and a grandmother who is addicted to TV contests and shop channels.

Brown Dog In November: Dogs and winter solstice in a story of obsession that vaguely brought Heathcliff to mind.

‘’Tonight is the longest night of the year.’’ Tonight the witches fly over the necropolis. I can feel them groping at crevasses shut tight on all other nights.’’

Rain In Arabia Petraea: An atmospheric story set in Petra, Jordan. The markets, the aromas, the culture…Beautiful setting and a woman who has found itself in the heart of a strange myth.

The Silkworm’s Address: A house located in the area of Lycabettus narrates a unique story.

‘’When the lights came on again after the Fifth Gospel, and as the nailing of the cross still resounded, I saw how her eyes had filled with tears. ‘’You must believe and you must pray’’, she bent down and whispered to me. A gust passed through the three open gates, warmed by the candles, heavy with scents, caressing the icons. Then I shut my eyes tight and made a prayer.’’

Grace: A tale of a faithful witch and a troubled young woman who needs to find the courage to believe. Rich in beautiful Greek Easter imagery, this was my favourite story in the collection. I adore the Easter Week, full of sanctity and self-reflection, and this tale is the best answer to the pretense that wants to convince us that atheism is progress. No. And I always tell the Twitter reformers not to forget to close the door on the way out.

The End of the Show: A beautiful paragraph (yes, it’s that short…) about a wasp and a late summer night. The heart of the Athenian summer evenings in fifty-sixty lines. That’s how good a writer Mitsora is.

This book is like a stroll in Plaka in a late summer night, like the buzzing of a bee in an otherwise silent, humid summer afternoon, the long, haunted ones. It is a collection reserved for demanding readers, willing to believe and appreciate the intangible and the transcendental. It is a treasure and a beacon of Contemporary Greek Literature that is in dire need of fresh air instead of the mass-marketed garbage that Greek publishing houses seem to adore.

‘’This path of mine was strewn with flowers and razorblades.’’

Many thanks to Yale University Press and NetGalley for the ARC in exchange for an honest review.