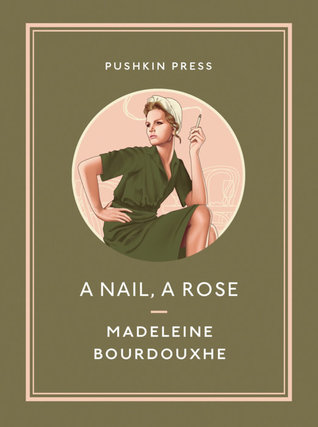 Title: A Nail, A Rose and Other Stories (original title Sept Nouvelles)

‘’All around them, the earth was black and white. A beautiful winter night-smell rose up from the black and white earth. A vast night meadow, the colour of the earth, flowed out before and beneath her, stretched to infinity, because the mass of the darkened town beyond it, sunk in the apathy of a town under Occupation, could not be clearly distinguished.’’

Following Klotsvog, for #WomenInTranslation month, we have a moving collection by Madeleine Bourdouxhe. Seven stories, six of which have a woman as their protagonist, taking place in Belgium and France. Bourdouxhe demonstrates her talent of understanding the woman’s soul and writes about melancholy, frustration, memories of lost love, agony over an uncertain future, bravery in the face of a terrible war in quiet yet powerful language.

Her heroines are women who can be seen as domestic goddesses, housewives that are the pillars of their families, the strength and the desire for change about to burst. In each story, there is a particular feeling of anticipation. Beyond the domestic setting and the scenery of the picturesque, bohemian cities, you can sense there is a storm brewing. Most of the stories leave you wondering and this is a precious detail when it comes to short stories. As depicted in the front cover of this edition, womanhood is seen as a weapon against the stereotypes and the uncertainty of the time, following the end of WWII. Sexuality is daringly depicted, reservations weakening in the era that is dawning.

Bourdouxhe creates the paintings of beautiful cities whose dim lights and cobblestone alleys hide the dissatisfaction and hunger of wives, mothers, maids, and housewives. What may be perceived as dangerous becomes a source of excitement, a coat should be a means to an end but is turned into an object that triggers strange fantasies. Political turmoil cannot be compared with the bitterness of thinking of an old love, an instant obsession can lead to violence and guilt.

‘’The world is empty, and so is the sky, we can touch neither perfection, nor eternity. But how beautiful the earth is, black with mud, white with frost. How beautiful it is, under its winter night – smell that rises from the earth, the trees, the air.’’

Irene: A woman falls victim of a clumsy attack on a cold winter’s night. The two, Irene and Jean, share spoils and confessions while Irene is trying to recover from a sad affair. This story is marvelous, one of those that would deserve to become a full-length novel. The imagery, the dialogue, the characters…

Anna: A frustrated woman, married to a brute, tries to make it through the long days in the garage. Desires and an acute feeling of isolation form a very powerful, dark story.

‘’The city was all lit up, and Louise walked along feeling very happy. She stopped in front of one café but didn’t go in, then in front of another, but still she walked on. In this evening full of lights she was searching for something, but she didn’t know what it was.’’

Louise: A young woman, mother to a little girl, works as a maid for a rich young lady and dreams of a man and a blue coat. A beautiful, quiet and daring story, rich in the elegance and the sadness of a bygone era. Absolute French film atmosphere.

‘’We were absolutely the same, not one and the other but one being, and it was like this for an eternity of silence, as if we had come together from the depths of a great abyss of time, and were moving towards the same night, both eaten up by the slow impatience of time.’’

Leah: A woman is haunted by the presence of lost love while unrest and uncertainty are reigning around her. And a strange man is watching the rain…Marvelous scenery with breathtaking descriptions of summer nights and sleepy village days, with one more fascinating heroine.

‘’Black branches of passing trees brushed against the windows, and fields stretched out beyond them. Darkness fell, and in the distance clouds banked and turned red, as though the night was sacred.’’

Clara: A rather short story of death and remembrance. Quiet and open to contemplation.

Blanche: An unhappy housewife dreams of a life with meaning and love.

René: A horrifying story of a troubled hairdresser and his vile instincts. It reminded me of a few psychopaths that have been lurking in Goodreads lately…

Sous Le Pont Mirabeau: This story is embellished with beautiful illustrations by Mig Quinet. They transport the reader to a different, more innocent, albeit dangerous, era. A woman has just given birth when the sounds of war become audible outside her window. She now has to follow the road of self-exile. An autobiographical story since Bourdouxhe gave birth to her child the month the Nazi monsters entered Belgium.

I know I am sounding like a broken record but this collection is one of the most beautiful literary creations you’ll ever read. The quality of the writing, the richness of the themes, the vivid characters. Even the Introduction by Faith Evans, whose translation is dreamy, is astonishing. It is as poignant and fascinating as the stories themselves.

‘’Hail, Mary, she thought, Hail Mary full of grace…Mary might have been full of grace but she wasn’t timorous. One fine night she stepped somewhere, got down from her donkey to give birth and then got straight back on the donkey to continue her journey. If only she could just get to the corner of the room, so that she could stand up with the baby next to the cupboard, far enough from the windows…’’

Many thanks to Pushkin Press, NetGalley, and Edelweiss for the ARC in exchange for an honest review.