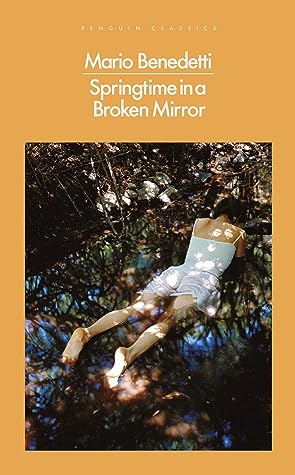 ‘’Tonight I am alone. […] I can think more clearly. I don’t have to screen myself off to think of you. You’ll say that four years, five months and fourteen days is too long to spend just thinking things over. And you’re right. But it’s not too long to spend thinking of you. The moon is shining, and I’m making the most of it, writing to you. It’s like a balm, the moon, it always calms me. And its light, however faint, shines on the paper, which is important because at this time of night they cut off the electricity. I didn’t even have moonlight, though, for the first two years, so I’m not complaining. As Aesop concluded, there’s always someone worse off than you.’’

Santiago is a prisoner in Montevideo. He was imprisoned for his political convictions and he has already spent four years in a cell, trying to keep sane while his wife, his daughter and his father have found shelter in Buenos Aires, away from the regime in Uruguay. In a turbulent era- the 1970s- for the entire Central and South America, we witness the struggle of a man who did nothing wrong except refusing to obey the ones in power and the way his family is trying to cope with his absence and the demands of a life away from their homeland.

‘’A life without phantoms isn’t good, a life where all presences are of flesh and blood.’’

The writer succeeds in giving us a sense of time and place and effectively ‘’paints’’ the scenery of Buenos Aires during the 70s. The problem is that I expected a focus on the political and social circumstances that affected the lives of the citizens of Uruguay and Argentina but the result seemed very different. ‘’Exiles’’, a series of entries written by an exiled writer is the finest part of the novel. It is the only section that powerfully and effectively communicates the complexities that led to dictatorships and cruel policies, along with the social and political context in Europe and the USA. ‘’Exiles’’ is the heart of the novel, for me, and the entire book should have been like this. There is a beautiful haunting text about the sacred site of Epidaurus, one of the foundations of World Culture. The rest of the novel was quite disappointing.

Beatriz, Santiago’s daughter, is confused. Which country can she call her ‘’home’’? Uruguay, the country that drove them away or Argentina, the country that offered them refuge? Beatriz understands the world around her and is brave enough to speak up. Benedetti gives us an excellent depiction of a nine-year-old’s thoughts and speech. Having said that, the writing ‘’felt’’ strange in a large portion of the novel. The language ‘’sounded’’ very USA-like and I think there was something missing in translation.

And now to my main issue with the novel. Characterization. Apart from Beatriz and Santiago, the rest of the characters are either indifferent or really, really irritating. Disturbingly so. Graciela, for example, Santiago’s wife. She is obnoxious, unlikable to the core, so full of herself. She has little sympathy for Santiago or her daughter. She goes on and on complaining that she ‘’doesn’t need him as a man’’, she doesn’t want to sleep with him and so on and so forth. She dares to compare his imprisonment and tortures to the fact that she has no one to fall in bed with. She spends her time applying lipstick, combing her hair, shouting and beating her daughter, trying to find someone to f…, crying her eyes out in pretense to make everyone feel sorry for her. She is easily one of the worst female characters you’ll ever encounter and her presence has a frightfully negative impact on the novel as a whole. Is she an accurate depiction of a wife left to care for a child and herself while her husband is a political prisoner? No. And if she is, then she is extremely badly written as a character. I am sorry.

My enthusiasm vanished after the 50% mark of the novel. I thought I had chosen a political-social work of fiction about the complex realities in Uruguay and Argentina, and all of a sudden, I found myself reading about an empty-headed woman’s sex woes and an elderly man’s frivolities with a much younger woman. This is a literary soap-opera in my books and I am not here for that. To add insult to injury, the ending is disappointing. This isn’t an open-ended closure, it is the epitome of blank. And I felt deceived having to read about love issues when the book seemed to be so much more than that. Unfortunately, my introduction to Benedetti’s work was far from positive. Three stars out of respect and because of the ‘’Exiles’’. And Beatriz and Santiago.

‘’It’s thortum now where my dad is, and he wrote that he’s very happy because the dry leaves float in through the bars and he imagines they’re letters from me.’’

Many thanks to Penguin Books Ltd and NetGalley for the ARC in exchange for an honest review.