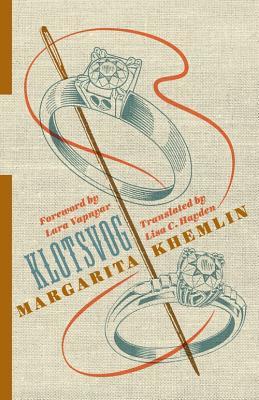 ‘’Though I had nobody to call, I often picked it up and said whatever came into my head, paying no attention to the piercing dial tone inside the receiver. I could dial any incomplete number and speak into the quietness. But I liked that I wasn’t pretending to actually speak. Because I never embellish reality.

August is Women In Translation month, so it seemed that the time had come for me to read Klotsvog, one of the most particular books I’ve had the pleasure to read recently, an exceptional offering of Eastern European Literature.

We are in Ukraine, during the Soviet era, a few months before the monster who answered to the name Stalin finally dies and rids the world of his cruelty. Maya, a bright young woman and member of the persecuted Jewish community, has to find the balance between her personal aspirations and her heart that seems to have a (fickle) mind of its own. Struggling to cope with family relationships and love affairs, Maya is a woman fascinating in her clarity and challenging in the numerous contradictions of her character. A daughter, a mistress, a wife, a mother, a pedagogue…Many roles and she fails in most of them. And yet, she is one of the most fascinating characters you’ll ever meet in the pages of a book.

Following the Translator’s Note by Lisa C. Hayden, a beautiful and moving text on her understanding of Khemlin’s heroine, we enter the world of Maya and her misbehaviour. In powerful, clear prose and clever dialogue, we spend moments in the company of a story that is sarcastic, bitter, sad. Maya’s thoughts are masterfully conveyed and there is very little attention to politics, if at all. Yes, this is a story taking place in the Soviet era but the emphasis is on human relationships and choices and although one could say that the plot itself isn’t groundbreaking or particularly intricate, Maya is a universe in itself.

‘’You know, Fima, a marriage stamp in a passport isn’t a verdict or a sentence. Keep that in mind. This is a difficult time, but I won’t hang on to you. I’m registered here. I’m a mother. And you’re a drunk and nothing else. You’ll be fired from work soon, then you’ll be a social parasite.’’

Our heroine is a highly contradictory and controversial character. She aspires to be independent and yet she regards her heritage as a burden and a source of danger. In my opinion, Maya is a very realistic depiction of a woman’s doubts and insecurities. And if she wants to put on lipstick while everything around her is falling apart, she will do so. She refuses to sacrifice her life, even though her choices are quite selfish, and her children do little to make her secure. Misha is a troublesome boy and Ella, her daughter, is terror personified. It may sound cruel but these two are the worst offsprings nature can produce…So she makes an effort to keep up appearances but she won’t apologize no matter how unusual or ‘’unacceptable’’ her choices may be. She doesn’t pretend to be humble and meek, and despite her severe flaws, she is honest to herself. Selfish? Yes, but realistic nonetheless.

Maya is one more proof that Eastern European Literature can create numerous memorable and highly controversial female characters. I loved her. I know, it may be difficult to even understand her but I couldn’t help siding with her and feeling sorry for the outcomes of her actions. The only weakness I couldn’t forgive was her infatuation with men. Men that are weak. And she loved them all. Or maybe not…It is exactly this absurd feeling that may prove to be her downfall…

‘’It was cold. There were stars in the sky, And the sky was dark, dark blue. A deep, deep sky.

I set fire to some newspaper and stuck it inside that mountain.

It immediately went up in flames.

It burned a long time.

The neighbours ran over in droves to look: they were afraid it was a house fire.

No, I said, it might be a house fire for somebody, but not for you.’’