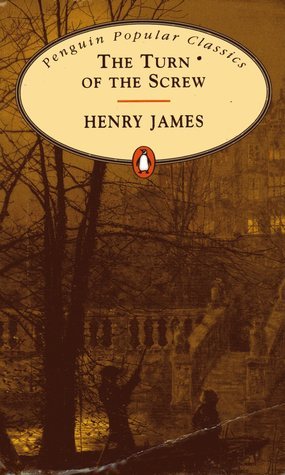 Title: The Turn of the Screw

“I seemed to float not into clearness, but into a darker obscure, and within a minute there had come to me out of my very pity the appalling alarm of his perhaps being innocent. It was for the instant confounding and bottomless, for if he were innocent, what then on earth was I?”

A young governess accepts a position in a beautiful estate in the English countryside, in Essex. The cosmopolitan uncle entrusts his niece and nephew into her hands and asks not to be disturbed under any circumstances. Bly is enormous, the acres endless, the house full of corridors and closed doors. Our unnamed narrator couldn’t be happier. Flora and Miles couldn’t be lovelier. And then, darkness arrives. A man standing on a tower, a woman in black standing by the lake. A strange song and a face at the window.

“I could only get on at all by taking “nature” into my confidence and my account, by treating my monstrous ordeal as a push in a direction unusual, of course, and unpleasant, but demanding, after all, for a fair front, only another turn of the screw of ordinary human virtue.”

Having recently watched (for the tenth time…) the marvelous 1961 film The Innocents, I thought that it was time to read one of Henry James’ most controversial works once again. I always choose this as a part of my summer readings. Its sultry atmosphere soon becomes eerie, its underlying sensuality grows within an environment of secrets and charged sexual tension. Suffocating and enticing, cryptic and provoking. Challenging. Hungry. The questions are many. Is everything real? Is the young woman ‘’imagining things’’? Has she created a world of her own, projecting her frustrations upon the ‘’innocents’’? Or has she found herself in a whirlwind of lust and obsession orchestrated by two malevolent spirits who use the children as vessels and instruments? Each reader needs to draw his/her own conclusions. James is not a writer who provides every solution at the end of his works. Even daily, mundane issues and snapshots of ordinary life acquire a different ‘’colour’’ in each novel. The Turn of the Screw is in a league of its own.

“The summer had turned, the summer had gone; the autumn had dropped upon Bly and had blown out half our lights. The place, with its gray sky and withered garlands, its bared spaces and scattered dead leaves, was like a theater after the performance–all strewn with crumpled playbills.”

Whatever your expectations may be, James created one of the best – if not THE best- Gothic novels of all time. Unique descriptions, commanding atmosphere, a background full of contrasts and dark imagery. The idyllic estate that changes when night falls. Two charming, gifted children that seem rather fascinated with Death, a housemaid that seems to protect every secret of the house.  The Turn of the Screw defined the Gothic genre and paved the way for the trope of the Haunted House that is still extremely popular. More than ever, in fact. Whispers, apparitions, murmurs, nightly windows, shadows, a troubled young woman who wants to help and understand. Add desire and a potential incestuous relationship lurking in the future and you have a timeless story.

I read this novella when I was 17. It frustrated me because I was impatient, wanting to have every answer delivered on a silver plate. We discussed the hell out of it in university and I fell in love. I understood that the majority of the finest books written create more questions when their final page is turned. It was this work that gave birth to my fascination with dubious closures. Now, no matter how many times I have read it, its magnetism stays strong.

And I am one of those who side with the heroine. I firmly believe that it was all true. There are many dark forces around us and beyond us. Who’s to say for certain?

“I take up my own pen again – the pen of all my old unforgettable efforts and sacred struggles. To myself – today – I need say no more. Large and full and high the future still opens. It is now indeed that I may do the work of my life. And I will.”