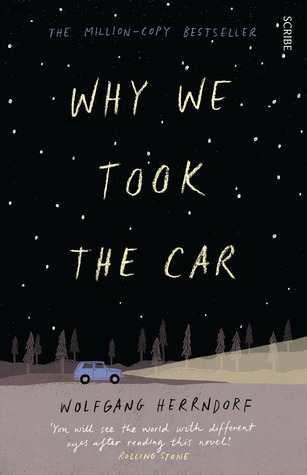 Title: Why We Took the Car (original title Tschick )

‘’Ever since I was a little boy my father had told me that the world was a bad place. The world is bad and people are bad. Don’t trust anyone, don’t talk to strangers, all of that. My parents drilled that into me. When you watched the local news – people were bad. When you saw primetime investigative shows – people were bad. And maybe it was true, maybe ninety-nine percent of people were bad.’’

The story starts in the police station with a frightened boy, a battered leg and quite a lot of dizziness. Just a few days earlier two boys wanted to go to the most important party of the year. An unlikely duo they were. Mike, a boy from a well-to-do family residing in the Berlin suburbs. His mother is an alcoholic. His father is a scum. Andrej, the new student who becomes a target because of his Russian heritage and his silence. However, the question is one: Why did they take the car?

Because of teenage love that knows no boundaries and is afraid of nothing. Because our partners in crime had to deliver a precious gift to a very special girl. And then, they needed to enjoy the taste of freedom, the carefree summer in the messy world their families have created. During their eventful road trip, they meet a family that adores trivia and Harry Potter, an old man who reminisces on love and war, a strange girl who lives alone in the middle of nowhere. They roam on streets that still bear the signs of the discrimination between the ‘’West’’ and the ‘’East’’, between the Germans and the foreigners, between the world of the adults and the universe of the children.

Wolfgang Herrndorf writes a remarkable journey of two teenage boys who need to overcome obstacles that were created by others. They take the car to see whether anything worthy exists beyond the harsh environment of teachers who seem to have been educated in the Nazi Youth during Hitler’s era, of classmates who have started formulating an excellent textbook on how to become a fully-functioning skinhead, of families that are criminally absent or criminally present. And still, through incidents that are funny and sad and messy, through moments that are heart-pounding fast or the epitome of summer serenity, Herrendorf gives us two boys that are clever and kind and able to find their way. Even in an old, stolen Lada. Rich in beautiful descriptions of the lazy suburbs, written in dialogue and prose that are both hilarious and sharp, Why We Took the Car is one more successful example of European YA Literature. In fact, this is exactly how YA SHOULD be…In the end, this is not a journey about discovering yourself but about discovering the true nature of the ones around you and whether you can trust them or not. Most of the times, the answer is not simple…

‘’And just imagine: The bugs go to the bug movies! They make movies on their planet and they’re sitting in some bug cinema watching a movie set on Earth – it’s about two kids who steal a car.’’