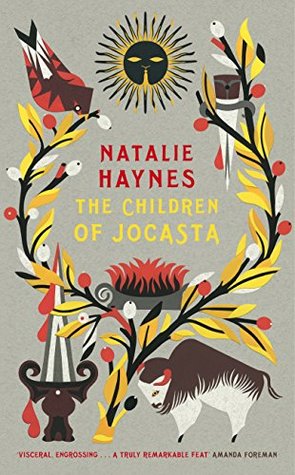 Title: The Children of Jocasta

‘’When you have grown up as I have, there is no security in not knowing things. In avoiding the ugliest truths because they can’t be faced…Because that is what happened the last time, and that is why my siblings and I have grown up in a cursed house, children of cursed parents…’’

I admit I am always extremely apprehensive when I read the words ‘’overlooked’’ and ‘’silenced’’ when writers and blurbs refer to more obscure literary or legendary figures. ‘’Overlooked’’ by whom? Myths are exactly that. Myths. They were born out of a certain era in a certain culture, many of them are firmly rooted in a reality lost in time. Sometimes, in order to serve a strange notion of political agenda or simply because they have no new ideas of their own, writers return to established legends and classics with the excuse that they want to bring something ”undiscovered” into the light. The results vary, in my opinion. There have been a few exemplary works born in the hands of writers with vision and respect and the necessary chops to carry out the task. The Children of Jocasta is a novel that wanted to present a version of the Oedipus cycle. In my opinion, the potential was there but the characters were rather inadequately treated by Haynes.

I won’t insult your intelligence by narrating the myth of Oedipus. I trust all of us to know it well (otherwise why are we here, right?) and it is possible that you have watched one or two performances of the plays written by Sophocles (primarily) and Aeschylus or the 1944 masterpiece Antigone by Jean Anouilh. Here, the story is narrated by Jocasta and her youngest daughter, Ismene, who dwells in the shadows of her dead parents. We watch Jocasta’s course from her marriage to Laius and we walk with Ismene until the events culminating in the conflict between Eteocles and Polynices and the closure of a family that became a toy in the hands of the gods. Does Haynes manage to breath new life in one of the most well-known legends? My answer would be yes and no.

The prose is sharp and vivid and the city of Thebes comes alive with its palace as the focus of the action. The dialogue is well-constructed despite the few contemporary elements included. It flows and successfully communicates the personality of each character. What I found extremely annoying, though, was the fact that Ismene became Isy, Antigone became Ani, Haemon became Hem and so on. It’s absolutely impossible to find short versions of these names (or any other name for that matter) in Ancient Greece. We don’t even use shortened names all that much even now, so this choice was rather problematic. The fact that this is a retelling taking place in the original context, in the original era doesn’t allow for such a troubling poetic license.

In my opinion, when we deal with such well-known stories, the focus should be placed on the depiction of the characters because the chain of events and its climax will probably the same, more or less. Right? Wrong. In Haynes’ novel, problems exist in both characterization and storyline. In terms of the characters, the main victim was Antigone. She starts rather badly and Haynes grants her a few dubious motives that didn’t seem faithful to the original or plausible enough to convince me that the changes were justifiable. If one of the aims of the novel was to turn Ismene into an interesting figure by altering the original material, I have to say that I wasn’t convinced about it either. Ismene doesn’t come across as a coward but as a sensible young woman. However, forcibly turning her into a ‘’heroine’’ doesn’t change the fact that she remains indifferent and plain. As indifferent as she is in the tragedy, albeit a bit more active. In fact, the parts related to Oedipus and Jocasta’s children were not as interesting as the narrative about their tragic parents. Jocasta is a powerful figure when she comes into her own, gifted with beautiful dialogue, and Oedipus is a worthy counterpart. Creon is the usual scum, his wife is irritating, Haemon is an absolute idiot. Eteocles and Polynices are quite underdeveloped. In addition, I wasn’t convinced with the writer’s choice over the dispute between the two brothers but this is a myth and the treatment of myths certainly allows a few liberties. What I cannot agree with is the forced change of vital parts of the legend. I consider it an audacity and I am absolutely narrow-minded about it. So, this is a subjective opinion but I won’t sugarcoat omissions and dubious twists and turns just for the sake of the ‘’new’’. ‘’New’’ isn’t always appealing or successful.

This novel stands as a rather average material next to the haunting original legend. I could consider this a moderate success. But many things were missing and when compared to its source, I cannot help being critical. Add the fact that in Greece we are raised with myths like Oedipus and Antigone (all different versions of their stories) and the bar is immediately raised too high. I appreciate her admitting of ‘’playing fast and loose with the myth’’ but I cannot agree. Not that my opinion matters but anyway. Having said that, I rather liked Haynes’ writing style (in strictly literary terms) and I look forward to A Thousand Ships.

If you want to read an exceptional novel focused on Jocasta, try Jocasta: The Mother-Wife of Oedipus by Victoria Grossack and Alice Underwood.