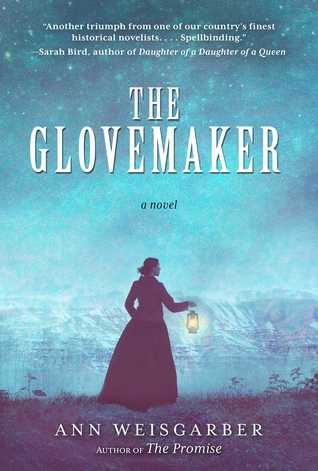 ‘’The recent days of sun and spells of warmer afternoon had melted the snow so that it was only calf deep. As day broke, we rode past and around rock formations shaped like cathedrals. Massive pillared walls of rock streaked orange and white sat on top of buttes. Nels steered us away from deep cracks in the earth that appeared without warning. Above us, hawks rode and rafts of air with their wings stretched wide.’’

Utah, 1888. Deborah, a Mormon woman who doesn’t practice polygamy, is waiting for her husband while winter shows its harshest face. Tending the orchards and making gloves, Deborah has secluded herself from the rest of her scattered community. Things change dramatically when two men, from very different backgrounds but equally dangerous and desperate, arrive on her doorstep. From then on, it is a struggle against time and people for her and Nels, her brother-in-law who has his own shadow to face.

I was interested in reading a book about the Mormon community and The Glovemaker was a successful choice. I don’t understand their way of life and I most certainly don’t accept it but the writer chose to construct the story around Deborah and Nels, two people who question and refuse to blindly conform. This prevented me from being alienated to the point of remaining different. In beautiful prose and flowing dialogue, Weisgarber shows us a community isolated from the world around and persecuted to the point of obsession. And she manages to justify the actions of both sides. The ‘’Saints’’ and the ‘’Gentiles’’ are both threatened by people who exploit others using different aspects of religion to satisfy their own ideas and dubious convictions. Deborah and Nels are at the heart of the storm, trying not to fall down, thwarted by rage and revenge. The way the feelings and thoughts of the two main characters were developed and communicated was very effective.

The background of the story is vividly created. The wintry setting, the harsh cold, the dimly lit houses, the ordeal of loneliness and exile are features of this well-written novel, along with the themes of who is ‘’accepted’’ and who is not in a particular community. How can someone feel like a stranger within the premises of their own close-knit environment? What choice is there when you feel the obligation to ‘’protect’’ a criminal just because he is one of the ‘’faith’’? These questions form the essence of the novel and provide the best incentive for a very interesting discussion.

Deborah is a very sympathetic character and the same can be said for Nels. They are not ground-breaking or particularly memorable (hence the 4 stars…) but they are an honest, well-constructed choice for main characters in a book whose success lies in the plot and the way it unfolds, in my opinion. Deborah is the cause of some slight repetition that makes the novel a little bit slow but overall, The Glovemaker is a quiet, beautiful story about choices, their consequences and the strength of women in a world that wants to isolate and manipulate them.

Many thanks to Skyhorse Publishing and NetGalley for the ARC in exchange for an honest review.