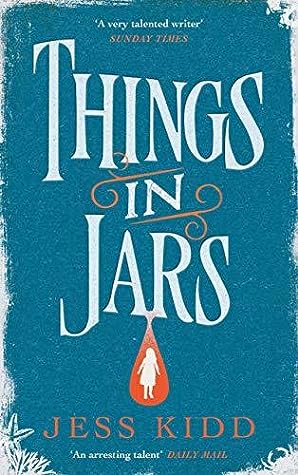 ‘’Below her, streets and lanes, factories and workhouses, parks and prisons, ground houses and tenements, roofs, chimneys and tree tops. And the winding, sometimes shining, Thames- the sky’s own dirty mirror. The raven leaves the river behind and charts a path to a chapel on a hill with a spire and a clock tower. She circles the chapel and lands on the roof with a shuffling of wings. She pecks at brickwork, at lichen, at moth casts, at nothing. She sidles up to a gargoyle and runs her beak affectionately around his eyes, nudging, scooping.’’

Bridie Devine is a young Irishwoman, not the flinching kind, who works as a detective, aided by her faithful housekeeper, Cora, and offering an often exasperating help to Inspector Rose. Brightest than the blazing flame, determined and dedicated, she is called to investigate the disappearance of Christabel. A child that has the power to enter your conscience just by looking at you with eyes that change colours. Bridie enters a world of illegal medical research, anatomists, and legends and faces the darkest aspects of her childhood, aided by a mysterious rugged man with a top hat who happens to be…dead.

What follows is my personal blabbering, full of adoration for London, Gothic atmosphere, mermaids and the intention to build a bookcase shrine to properly worship Jess Kidd’s extraordinary talent. Ye have been warned…

‘’The woman is made of boot polish and pipe smoke, clean cloth and the north wind. And as for the dead man walking behind her, well, he means no harm.’’

London is the central character. It comes alive through the pages. I don’t know, Jess Kidd has a supernatural gift. I don’t know how else to explain her ability to hypnotize the reader. She has created an elaborate time machine to transport us to London during the 1860s. We walk and see and smell and listen. It couldn’t be more ‘’real’’ than that. The multicultural neighborhoods of the capital, the dreadful orphanages vividly described by Dickens, Trollope, and Thackeray, the ever-present threat of cholera, the mysterious nights, the penny dreadful scenery. And most importantly, Old Father Thames stands witness to a city that retains so many secrets, so many horrors, and so much beauty. The marvelous way in which Kidd leads the readers in the streets and alleys of the city reminded me of Michel Faber’s masterpiece The Crimson Petal and the White.

I mean, read these paragraphs…

‘’The metropolis isn’t sleeping, not really. For every Londoner in bed there are ten awake and up to no good – on the fly, on the loose, on the tiles! The moon knows; she sees all. Tonight, she’s our guide, for it’s late and every self-respecting raven will be perched in her own black-feathered embrace. Let the corvid sleep! The moon sees the beauty and cruelty of London: her whores and drunks, saints and murderers, thieves and lovers and fighters. The moon sees every black alley and yard, scrubland and marsh.’’

‘’Coming up from beneath London’s streets, another new sound: a tumultuous rushing. The ancient rivers of London, newly awaken and gathering force, now erupt. Flooding lane and street, drowning basement- dwelling families and overwhelming cesspits. Then there is the rain. Great drops of the stuff, a constant patter on every window and shutter, tin can and bucket. And the Thames keeps rising.’’

And then, the Gothic elements are used to perfection. There are traces of witchcraft and potential hauntings. Strange things in jars, the circus world with its peculiars. Anatomists struggling to learn and to deceive. Stories of mermaids from Ireland, Holland, and France. The presence of the merrow, the evil mermaid, a figure we don’t often witness in Literature. Pigeons and seagulls form common imagery throughout the novel, creating a sense of unrest and eerie commotion. There is a tale within the tale and the effect is astonishing, it will give you nightmares. There’s even a reference to Herne the Hunter, a legendary British Folklore figure.

And the characters? Never mind the perfect prose, the beautiful dialogue, the astonishing imagery. Bridie…Jesus Christ, I could highlight every sentence she utters, she is my new spirit animal. From beloved Wicklow. Sassy and ferocious, with an acute sense of irony, indifferent to all norms and rules. How can I not adore her? Cora, loyal, fierce, honest and sensitive. And Ruby…Ruby stands equal to Himself’s Mahony in terms of charm level, all handsome and valiant and electrifying. Bridie and Ruby are one of the best, most unique, most perfect (I could go on forever…) couples you’ll ever encounter in a novel.

Is this the best Jess Kidd novel yet? I think so. I adore all three but this one truly captured my heart, put it in a chest and hid the key. In a jar. When perfect writing, outstanding atmosphere, and sheer literary Art come together, the result is a masterpiece like Things In Jars.

Also, Jess Kidd, why are you so perfect?

‘’Bridie walks between the headstones, the crosses, the covered urns, the plump marble pillows inviting everlasting slumber. […] Stone angels perch on all four corners of her tomb: wings folded and faces impassive, they are giving nothing away.’’