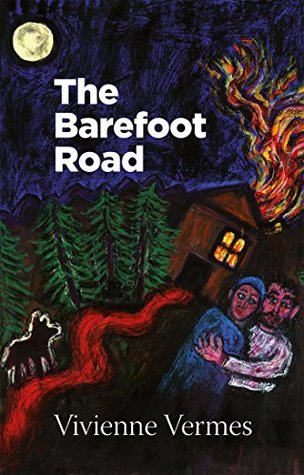 A dark night is violently lit by torches burning bright. Screams, people running, cries demanding blood. In a village in Transylvania, people belonging to a different ethnicity are violently driven away from their homes and their land, victims of an incomprehensible hatred. The culprits succeed in driving the Others away. For a few years, they live in a fictional, oppressive peace, guided by superstitions and corrupted priests. Until comeuppance knocks on their doors. One by one…The Barefoot Road is the definition of exquisite Folklore Literature.

‘’She journeyed past haunted trees, waving their twings towards the sky, fingers reaching for nothing but cloud and vapour.

A place of nothing. Of complete quiet, without light or dark, hope or dread. A place where the soul drank and was drunk.

Here, she asked the spirits for help. By the sighing in the branches, she knew she was heard.’’

Vivienne Vermes makes excellent use of the rich, mystical tradition of the Romanian legends and draws parallels between Folklore and the theme of racism. She creates characters that have a basis on archetypes of fables but turns them into fully fleshed-out protagonists. A mysterious girl who brings change and danger. A wise old woman who is deeply connected to the pagan past of her land and has paid a heavy price for the villagers’ lust for blood and their blindness to the different. A man, cursed with a despicable wife, who decides to follow his heart, disregarding the consequences. A corrupted priest. A community that justifies the violence of the mob through tradition and legends. Many of them stuck into religious prejudices and only a few are wise enough to understand Faith as a possible source of hope and love.

The imagery of this novel is truly outstanding. The customs of Lazarica’s day, the dances, the ferocious feelings of love and faith and enmity. The firm connection to the land and the haunting folklore of Romania. I come from the Balkan region so I know the lore of each country and I could smell and feel the air, I could ‘’see’’ the unique Balkan beauty. It is a novel that I would characterize as brutal, merciless and magnificent in its simplicity with writing that is confident, poetic, violent and whimsical.

‘’The cawing of a crow brought her back to the road, and the cross, and the day. The visions of her mind receded until they were patches of light fading behind her closed eyes. When she opened them, the wind had dropped, the sun was high in the sky, and on the ground were three people holding hands.’’

Many thanks to Troubador Publishing Limited and NetGalley for the ARC in exchange for an honest review.