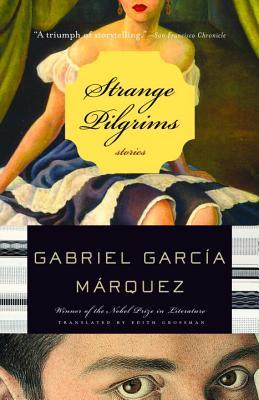 ‘’A continent conceived by the scum of the earth without a moment of love: the children of abductions, rapes, violations, infamous dealings, deceptions, the union of enemies with enemies.’’

Father of Magical Realism, a true god of Literature, one of the immortals. Gabriel Garcia Márquez doesn’t need introductions. He is the writer who drew my attention to Latin American Literature. Through his work, I fell in love with Colombia, its culture and traditions, with the rich literary world of Central and South America. This collection is one more example of the impact and wonder of his writing.

12 stories. 12 pilgrims whose life led them away from their homelands into the old, safe arms of Europe. But is it so? Can you ever truly leave your birthplace behind? The answer is ‘’no’’. It is in your blood, your thoughts, your behaviour. It haunts your steps, it doesn’t let go…It doesn’t matter whether you are in Paris, Geneva, Madrid, Barcelona, Naples, Sicily, Rome. Your land is inside you. Everything else is only a pilgrimage…

Bon Voyage, Mr. President: A young couple befriends the exiled President of an unnamed Carribean country. Initially, their purpose isn’t exactly honest but what happens when he actually manages to gain their sympathy? Set in Barcelona.

‘’No one sang or died of love in the plastic trattories on the Piazza di Spagna. For the Rome of our memory was by now another ancient Rome within the ancient Rome of the Caesars. Then a voice that might have come from the beyond stopped me cold on a narrow street in Trastevere. ‘’Hello, Poet’’.

The Saint: A tender story of a man who has suffered a terrible loss set in Rome, the Eternal City with the immortal beauty, over a sad summer. A story of Art, hope and…self-canonization.

I Sell My Dreams: An extraordinary story of a woman who had the ability to prophesy through dreams, set in Havana, Vienna, and Barcelona. And we get to meet Pablo Neruda.

‘’Love is eternal for as long as it lasts.’’

I Only Came to Use the Phone: A young woman finds herself in an asylum and her real-life nightmare begins somewhere in the Spanish desert. A harrowing story.

‘’They say this is the country of the Moors’’, said another, distant voice that resounded throughout the dormitory. And it must be true, because in the summer, when there’s a moon, you can hear the dogs barking at the sea.’’

The Ghosts of August: A haunted castle in Tuscany is the summer destination of a beautiful family. And this is how you scare the bloody daylights out of a reader in just three pages…

‘’At Christmas, coloured lights were strung between the acacias, and music and happy voices were heard from the balconies, and a crowd of tourists invaded the sidewalk cafés, but in the midst of all the festivities one could feel the same repressed tension that preceded the days when the anarchists had taken over the streets.’’

Maria dos Prazeres: A former prostitute is obsessed with what she perceives to be her impending death. A beautiful, sad story in majestic Barcelona.

Seventeen Poisoned Englishmen: A woman travels to Naples to see the Pope and witnesses a strange, macabre incident. A fascinating mixture of comedy, mystery, and drama.

Tramontana: A story that vaguely reminded me of Chronicle of a Death Foretold. Brilliant…

Miss Forbes’s Summer of Happiness: Two children have to spend their vacations under the control of an extremely strict nanny who has a few dark secrets of her own. Set in Sicily.

Light Is Like Water: Two boys from Cartagena who adore the sea feel trapped in their small apartment in Madrid. The solution they come up with in order to learn how to row has tragic results…

‘’She made her mental calculations, and only then realized that they had passed Bordeaux, as well as Angoulême and Poitiers, and were driving along the flooded dike of the Loire. Moonlight filtered through the mist, and the silhouettes of castles through the pines seemed to come from fairy tales.’’

The Trail of Your Blood In the Snow: A young married couple drives from the Pyrenees to Paris. The woman has an almost invisible scratch on her ring finger, but she is bleeding, leaving tears of blood in the snow…This is one of the most beautiful, foreboding stories I’ve ever read. It shocks you and leaves you empty and in pain. Actual, physical pain…

Gabriel Garcia Márquez writes about exile, despair, loss, shattered hopes, broken families. And death. His pilgrims are people of all walks of life, their backgrounds varying, their aspirations remaining the same. In morbid twists and shocking closures, the reader completes a difficult pilgrimage in the land of the human soul that searches for the unattainable and the pure…