Today, we travel to beautiful Russia.

I don’t think Russian fairy tales need any introduction. The following is a well-known Russian tale about a prince and a frog princess. We also find it in Ukraine where the frog has been substituted with a mole.

Long, long ago in Russia, a Tsar had three sons. The time had come for them to marry and their father had a brilliant idea,

-Take you bows and go to the vale. Shoot your arrows in three different directions. Where your arrows fell, there you shall seek your brides.

-My prince, take your arrow.

-I don’t want it, said the distorted prince.

-Then you will never cross the swamp.

There was no choice for the youngest prince. He took the arrow and the frog became his wife much to his dismay and shame…

Now, a few days later, the Tsar orders his sons’ wives to stitch him a nightgown worthy of a king. We can understand the despair of the young prince. But the frog was not disturbed.

-Do not trouble yourself, my husband. Go to sleep and the day will start anew.

The frog waited for the prince to fall asleep. And then, she shed the frog skin and transformed herself into a beautiful princess. She went to the balcony and called for three fairies.

-Stitch a nightgown like the ones my dear father used to wear.

The prince couldn’t believe his eyes when he saw the beautiful nightgown, weaved with golden thread, adorned with jewels. The Tsar was very pleased, whereas the nightgown of the eldest wife was too small and the second wife’s creation was too simple. 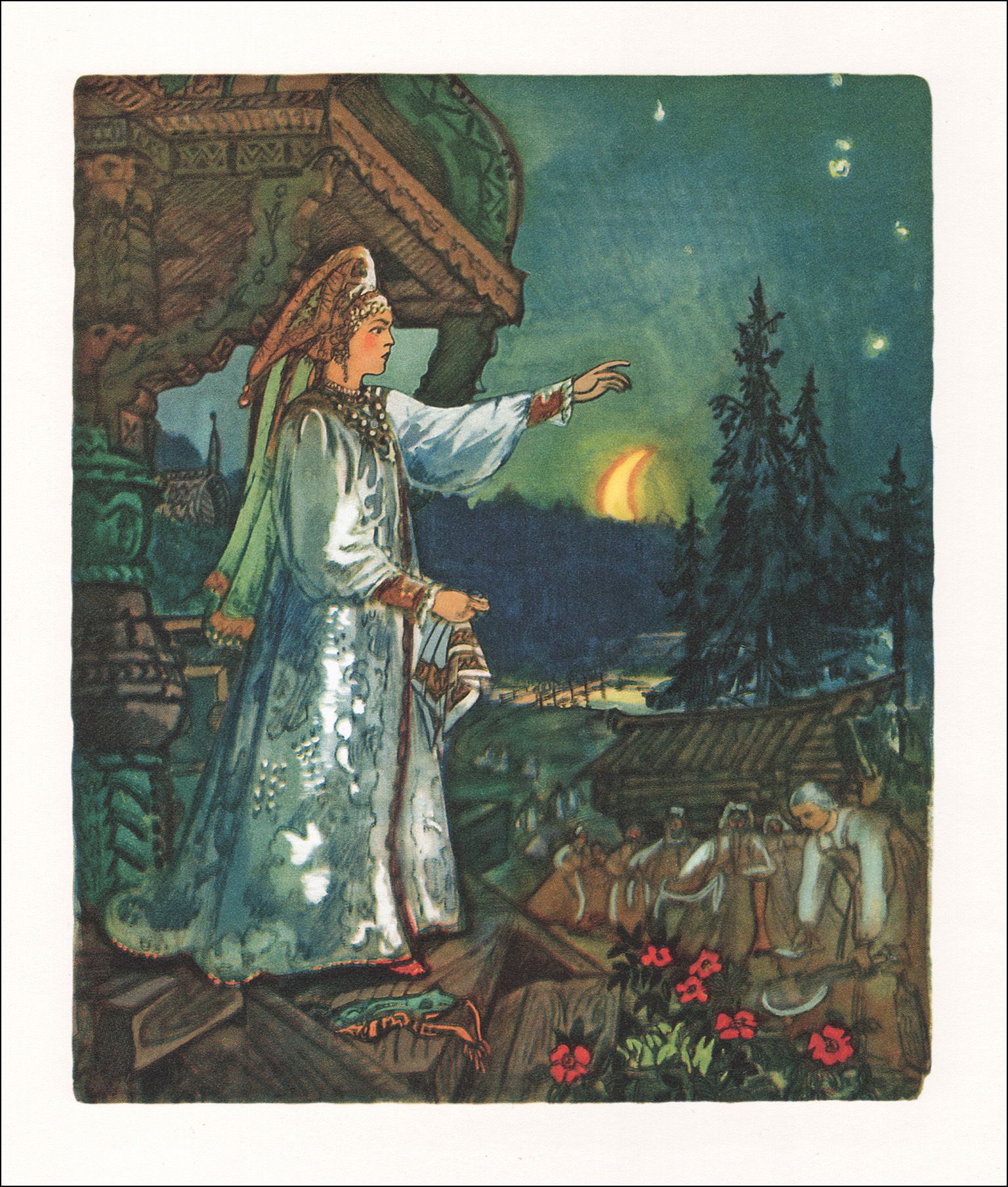 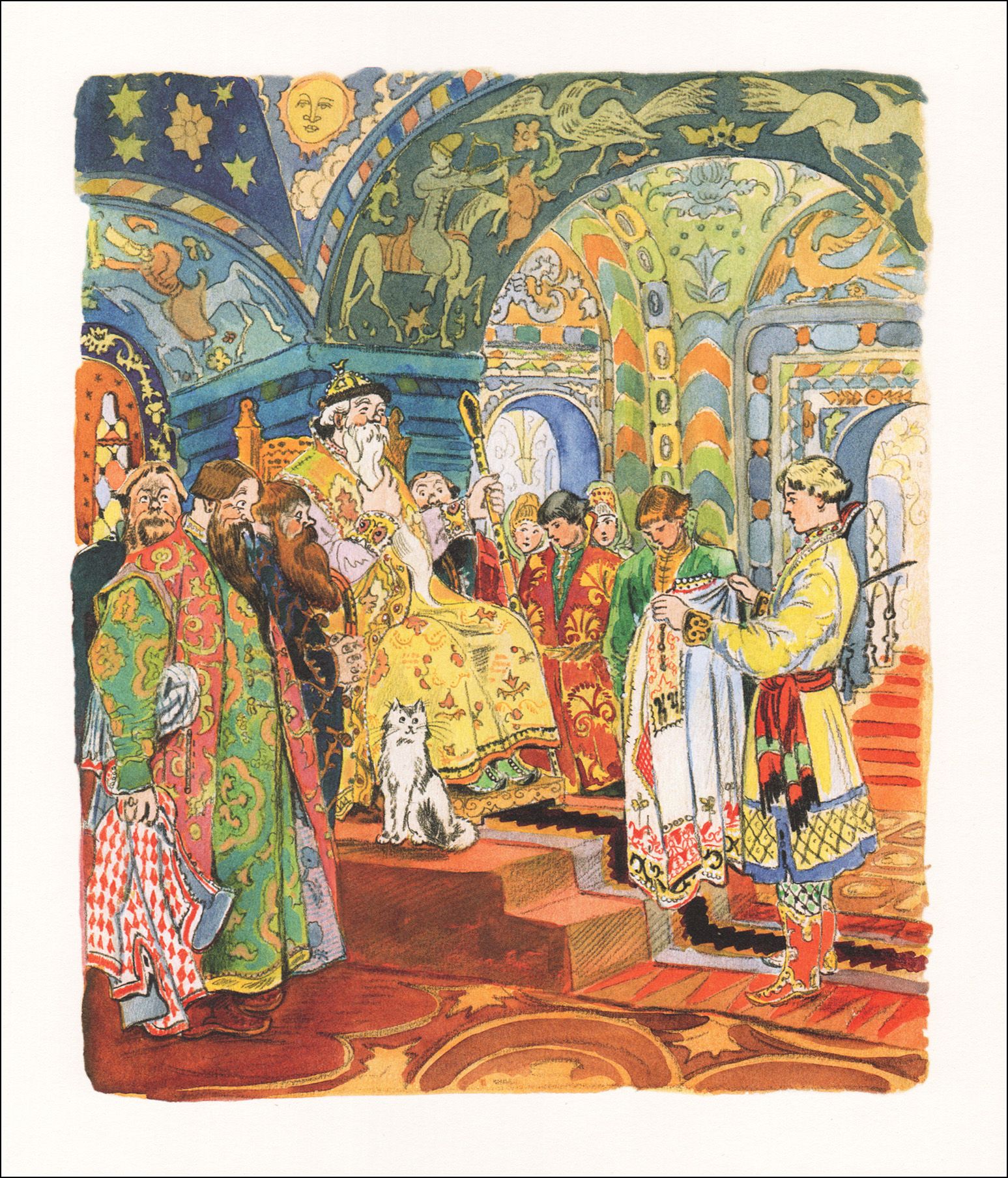 But the Tsar wasn’t done with his requests.

-Tell your wives to bake me soft white bread.

And so it was that the youngest son produces a soft, tasty cake worthy of a feast. Unlike his brothers whose bread was hard and filled with small pebbles.

-And now, said the Tsar, you will come to the feast tomorrow with your wives.

But the frog told her husband to go alone and wait for her. And so he did. Suddenly, a loud thud was heard and the guests saw a golden carriage led by six flying horses. The carriage stopped at the entrance of the palace and out of it stepped Vasilisa Premudraya, the most beautiful princess. And the Tsar was pleased. During dinner, our princess drank red wine and poured a few drops in the right sleeve of her dress. She ate the roasted swan and hid two bones in the left sleeve. The two wives had been watching her and did the same. While Vasilisa and her husband were dancing, she stretched her hands and a small pond with two swans appeared suddenly. When the eldest son’s wife did the same, mud fell on the guests and two bones hit the Tsar in the eyes. So, the two princes and their worthless wives were banished forever.

Meanwhile, the young prince returned to his palace and threw the frog skin into the fire. The princess wept bitterly.

-If you had waited for a little while, we would have been together. But now, I am still a captive of the evil sorcerer.

And she transformed herself into a swan and flew away. Now the prince had to wonder in the Russian forests, on a journey that brought him face-to-face with Baba Yaga and other creatures of Russian Folklore until he came in the domain of Koschei the Deathless before he and Vasilisa could be released from the curse.

Russian folktales are full of stories about princesses who are cursed to transform themselves into an animal because of the jealousy of an evil sorcerer or a witch. Koschei is a common enemy and it is usually the youngest of three sons that finds the worthy bride and solves a curse. This is a familiar motif in Slavic tales. What is unusual in comparison to the Western European tales is that the princess loses her skin but it is up to the husband to defeat the evil with bravery and the combination between the intelligent princess and the courageous prince is quite effective.

This tale has inspired beautiful paintings by many famous Russian artists and is included in every Russian Folktales collection.