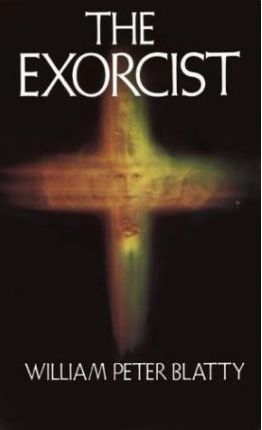 Obligatory classic poster -best in the History of cinema- photo is coming:

The trip may be disturbing…Ye have been warned…

Strange as it may seem, the first time I watched the film version of ”The Exorcist” was three years ago. I know, shame on me, but you see, I thought I wouldn’t be able to take it seriously. I don’t believe in possessions or devils or any of these things, although I love to read about them. Of course, I knew of Blatty’s novel and I was aware of the cutie little green Pazuzu-face of young Regan, but since I don’t believe in the main theme of the story, I knew I wouldn’t be able to appreciate the film, right? Wrong! I admit I should have watched it sooner. It was unsettling and full of interesting underlying information about psychology and the mentality behind the cases where exorcisms sounded like the best solution. Not to mention Max Von Sydow’s formidable presence. Therefore, I eagerly searched for the novel and started reading to appreciate the story under a new light.

So, just as I believed, the novel is very, very good. Even better than the film (which remains one of my all-time favourites), its impact was felt immediately, and I must confess that I avoided reading it when I was alone in my house. I don’t know why, but it made me nervous in a way the movie never did. To watch Regan’s trip down to Hell, to anticipate the beginning of the child’s ordeal was truly, truly agonizing. Naturally, this was possible due to the power of the author’s writing. Blatty uses short sentences and everyday speech and the narration becomes much more immediate and the images more powerful. Certain infamous scenes of the film are a lot more graphic and highly disturbing in the book.

Come on, you knew it was bound to be here…

As in the film, my favourite character was Father Karras. I have a soft spot for him- partly due to him being Greek- but I feel that he represents the heart of the story. The struggle to seek the answers to his questions, the doubts over his faith and the agony to help in the name of God, the insecurity and lack of faith to himself and his abilities as a priest and as a doctor, are issues that are daily relevant to a significant number of people. On the other hand, I never warmed to the character of Chris, Regan’s mother. I admired the fact that she was down to earth and close to her daughter as much as possible, given her demanding profession, but for some reason, I consider her rather naive and a bit stupid, to be honest. Perhaps I am a little harsher than I should, but her interactions with Regan’s doctors and with Karras didn’t exactly make her look like the sharpest knife in the drawer. Now, in the film, Chris is very different so the cinematic version wins this round.

So, a great book that would have been a success even if the film had never come to pass. Loud applause to the producers who allowed Blatty to handle his own book and transfer it to the big screen and the results are obvious in a well-made film that opened new paths to the Horror genre.