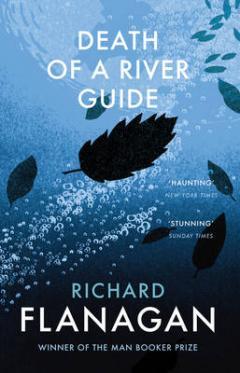 Title: Death of a River Guide

‘’One generation passeth away, and another generation cometh. But what connects the two? What remains? What abideth in the earth forever?’’

My introduction to Richard Flanagan’s work was the award-winning The Narrow Road to the Deep North which didn’t particularly excite me. I was impressed with his talent for description and the communication of his characters’ thoughts but the story left me cold. I have the blessing to have a wonderful boss. She adores books as much as I do and Death of a River Guide was her Easter gift to me. I can verify that I am glad because this novel, the debut of Richard Flanagan back in 1994, was one of the most beautiful and atmospheric reading moments of the year. ‘’You are given the gift of life and what happens? You want to throw it away!’’

‘’My vessel is stopped and making no way through the water.’’

In ethereal, mystical, moving prose, Flanagan gives us a man that has seen and felt everything. The persecution of his ancestors, the first meeting of his parents, the life of the ones who shaped his own course. He narrates his childhood under the guidance of a wise woman, Maria Magdalena, his love affair with an impressive girl, and the terrible loss he had to face. Aljaz becomes the instrument through which Flanagan comments on themes related to immigration, culture, imperialism, overcoming hardships. No theme is stronger, though, than the effervescent, instinctive will of the human being to push further, to resist the tendency to despair and start again. Sometimes, however, this proves to be a Herculean task.

Aljaz is a beautiful character, a man who fights against his fate. Surrounding him are characters that are rich and complex. Sonja and Harry, Couta Ho, Maria Magdalena, the Cockroach. Each one of them represents a human tendency, our feelings and our goals, our thoughts, and deeds. With very little dialogue and haunting descriptive passages, Flanagan draws the portrait of a man and the story of a land as fascinating as it is mysterious.

‘’Children denied their parents and invented new lineages of respectable free settlers to replace the true genealogy of shame. The descendants of the convicts and the blackfellas became service-station attendants or shop assistants or lorry drivers or waitresses or clerks if they were lucky. No one spoke. No one spoke.’’