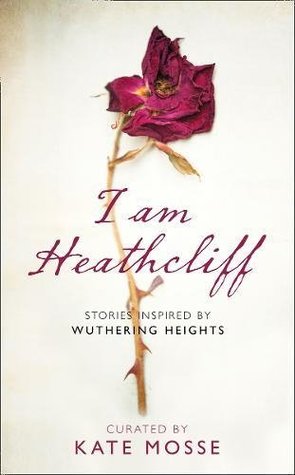 Title: I Am Heathcliff: Stories Inspired by Wuthering Heights

‘’Archetypes. Stories that seem bigger than the books that contain them. Wuthering Heights is such a book. Cathy and Heathcliff are such characters.’’

I have longed and dreaded to read this collection. I love Kate Moss’ work and as you might know, Wuthering Heights is my obsession. I love this novel with a love as deep as Heathcliff’s for Cathy. Although I never comment on other people’s reviews, I have taken part in countless fights with certain ‘’reviewers’’ who are dismissive, rude and frankly ignorant of extreme instincts and the depth of Emily Brontë’s work. This is why I was terrified of this collection. If it had been written exclusively by Moss, I would have felt much safer. I know that I would be a severe judge. But it turned out I was in good hands. The vast majority of the stories included are beautiful. There were five stories that were the epitome of trash but 5 out of 16 is rather good when the rest are exquisite.

The introduction by Kate Moss is brilliant. To my knowledge, she is the first writer to stress the importance and the influence of Emily Brontë on the future course of women writers. She broke the mould by transgressing to the territory of the ‘’ devilish’’ and the ‘’heathen’’ and even now there are many who are unable to grasp the obsession and love and urge for revenge that seem unnatural to our weakened minds. But what can we expect when our cultural images of love of our modern world come from silly romances and soap-operas? These are the 16 stories of the collection:

Anima by Grace McCleen: A young girl witnesses the ordeal of a forest animal with which she has formed a deep relationship. Her thoughts echo Cathy’s witnessing the injustice and humiliation of Hindley and the Lindons towards Heathcliff. Brilliant, haunting writing.

A Bird, Half-Eaten by Nikesh Shukla: A married man falls in love with a boxer. No. Nothing to do with the greatness of Wuthering Heights. If you want to write a gay romance, try another genre.

Thicker than Blood by Erin Kelly: Heath is newly married to Izzy but he’s still madly in love with Cat, stalking her social media accounts. This is the definition of modern retelling. Heath’s obsession is depicted in a shocking way, touching on a very sensitive theme and underlying plotline of the original. Possibly the most memorable story in the collection. Outstanding!

One Letter Different by Joanna Cannon: A tender, atmospheric story of the friendship between a girl with insufferable parents and a very intelligent, mysterious boy, set in the Yorkshire Moors. I loved the little bits and pieces referring to Wuthering Heights like the curved letters and the tappings on the window.

The Howling Girl by Laurie Penny: Unfortunately the only thing that was interesting here was the title and a few accurate observations on the influence of political correctness in the choices of the literary world. Otherwise, this was a catastrophe. The writer tried to mess with the themes of love, expectations, anorexia (!), authorship and a pseudo-ghost story and it was atrocious. The gimmick of the girl at the window was a sacrilege.

Five Sites, Five Stages by Lisa McInerney: God, no! Absolutely not! Never! Wuthering Heights deserves so much better than the story of a lesbian couple of drug-addicted, miserable Meanads…Take it out of my sight!

Kit by Juno Dawson: The catastrophe continues. A sex-crazed wannabe ‘’It’’ girl with the brain capacity of a tiny pebble and a guy that enjoys gym shelfies but is brooding because he’s also a promising (?) artist. This filth should have been tossed in the trash bin with the danger of contaminating the universe. On the other hand, what can a serious person expect from someone who is a ‘’contributor’’ in Glamour? Jesus….

My Eye Is A Button On Your Dress by Hana Al-Shaykh tr. by Catherine Cobham: An astonishing story about two lovers set during the tumultuous period of the Arab Spring. This story deserves to become a novel.

‘’He made his way back to Penistone Crag and rested his hand on the stone. So many tales swirled around it- that it was sacred to the fairies, that it would grant wishes for a price, that it could bind and unbind. Should he ask it for help in what lay ahead? He laughed bitterly and gave it a slap. ‘I’ve been called a changeling, a demon, and the Devil’s own child’, he said aloud. ‘’If I can’t do this myself, I doubt you can help me.’

The Cord by Alison Case: A beautiful text on Heathcliff’s thoughts the night he left Wuthering Heights for three years.

Heathcliffs I Have Known by Louisa Young: Such awful, needless bad language…I suggest the ‘’writer’’ of this…thing read more Literature and keep clear of a work she clearly cannot understand. Why write about something you loathe and project your own ideas to an immortal character? There is always Twitter and Facebook and a brilliant career as a scriptwriter for a ridiculous TV-series. For shame…

Amulet and Feathers by Leila Aboulela: A story of revenge and injustice set in the Middle East in the times of old. Although not directly connected to the novel, the story reads like a tale from Arabian Nights and it is marvelous.

How Things Disappear by Anna James: A young woman is slowly disappearing. Literally. The problem is she has no one to entrust her heart to. Beautiful Magical Realism story.

The Wildflowers by Dorothy Koomson: A woman has to cope with her lover’s horrible mother who cares only about money and status. It may sound simple but it is a powerful story.

‘’You hear a fox scream and an owl cry. The night gathers in pleats of black and blue. The cold rain falls. You teeter on the brink. It would be so easy to tumble and smash your skull on the rocks.’’

Heathcliff Is Not My Name by Michael Stewart: Heathcliff’s musings of sorrow and revenge on the night Cathy returned from Thrushcross Grange. Moving, haunting text, fully doing justice to Heathcliff’s larger-than-life character.

Only Joseph by Sophie Hannah: A mother is suddenly asked to solve a murder that took place in a private school during the preparations for a musical called I Am Heathcliff!  I am not a fan of crime novels. In fact, I hate them but this story was rather interesting.

It is impossible to recreate a love like Heathcliff’s. It just can’t happen or it needs a truly gifted writer. In this collection, the ‘’writers’’ who attempted to do that or tried to use the novel as a vehicle for political issues failed miserably. 5 out of 16 would justify a 4-star rating but the rest of the stories deserved their own novels and judging the collection as whole too harshly would be an injustice. When I closed the book, I felt as if I had walked in the moors once again and this was enough…

‘’I lingered round them, under the benign sky; watched the moths fluttering among the heath and the harebells, listened to the soft wind breathing through the grass, and wondered how anyone could ever imagine unquiet slumbers for the sleepers on that quiet earth.’’

Many thanks to The Borough Press and Edelweiss for the ARC in exchange for an honest review.