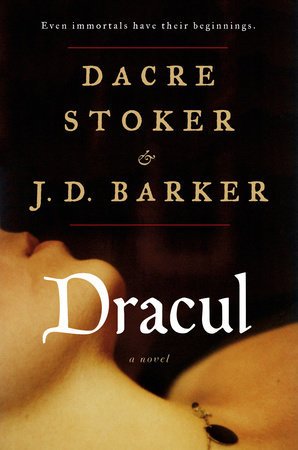 ‘’A crescent moon dangling in the sky offered the thinnest of illuminations, bathing the world in nothing but faint outlines, silhouettes, and shadows. The tower of Artane Castle was barely visible in the distance, lost behind rolling hills and farmland doted with the small homes of our neighbours. Beyond that were the hazel and birch trees of the forest, their inky branches scratching at the night sky in anticipation of a pending shower.’’

Bram Stoker’s Dracula is a novel most of us have read. It is a work inspired by still unclear sources. Was it Vlad the Impaler or Countess Bathory that inspired him? Whatever it was, Stoker produced a novel that became a ‘’classic’’, justifiably or not. I thought that Dracul would be a literary effort to trace the thoughts and the sources that led Bram Stoker to create the (absolutely imaginary) Count figure. I can verify that the atmosphere in Dracul is well-constructed and the characters are interesting and (moderately) developed. However, my reading experience as a whole was extremely disappointing. There were times when I felt that the writers actually insulted my intelligence.

Ireland, 1850s. The time of the terrible famine. In the Stoker household, the children are protected from the sorrow of the ones who aren’t privileged but they cannot be protected from strange forces that come from a world beyond our understanding. Ellen Crone, though, is there to protect Bram, Matilda, and Thornley. She is the mysterious nanny whose eyes seem to change colour once sickness strikes the house, whose face changes every time Matilda draws her portrait. Ellen is the angel that watches over the children but sometimes, the angels wear black. This will become obvious a few years later…

Our story is told through the eyes of Bram, Matilda, and Thornley, spanning the decades from the 1850s to the 1890s. Told in diary entries, letters and in the usual third-person narration, the novel is written in an engaging style and Part I benefits from the multiple perspectives. The background of the novel is exceptional, no doubt about that. Apart from the mystery of the story itself and the alluring blue-eyed woman in black, we get the moon, wolves howling, snakes under stones, naked branches, windows opening by themselves, reflections in the glass, gargoyles, bogs, castles, nightly forests and a few (mishandled) traits of the Vampire tradition that was born in the Balkan region.

It takes much more, though, to produce an actual work of Literature…

Let me start with the least of the problems. Whitby is a magical place, legendary and haunting. It hurts me to say that the legends associated with the region and its famous abbey weren’t treated with the proper respect by the writers. Throughout the novel, there were parts that I would characterize as extremely graphic. Even I had to proceed with caution. In the first part of the novel, this was very effective. However, the rest of the book almost read like a 70s Hammer Horror movie. In fact, I think that Hammer films were more plausible. In the end, I just couldn’t take it seriously.

‘’I’ll be okay’’? (repeated dozens of times!!!), ‘’I’ll be right back’’? ‘’Could you just..’’? In Ireland, in the 1850s? Are the writers joking? It was so irritating to find these linguistic abominations in a novel that is supposed to be an atmospheric and detailed read. In fact, most of the dialogue ‘’sounded’’ odd, unnatural. Vampèry speaks like a 21st-century lawyer in a silly TV-series. In addition, Matilda’s letters were a stupid inclusion which resulted in repetition, boredom, and anger on my part. Plus, the feeling that this was an unnecessary long novel was extremely tense. Certain parts seemed ludicrous, cheesy. Vampires writing their memoirs? God, no! Throw a melodramatic love story in the mix and there’s me running away faster than my shadow!

Also: ‘’We will triumph or we will fail together.’’

What? No. This is NOT Literature. It may be escapism, I’ll give you that. But I am not a reader who seeks ‘’escapism’’, this is not what I am looking for in a book.

And now, personal rant time: The parts that tried to explain the origins of the Count have nothing to do with the historical facts. Frankly, I am tired and sick at heart to see Vlad Tepeș distorted for the sake of Gothic gimmicks. Was he violent? Well, obviously. People need to read some History…He was the man who stood against one of the vilest forces at the time, the barbaric Ottoman Empire. It is discouraging to see that writers who are too lazy to create stories of their own use historical figures to produce utter trash. The same thing happens with the stories about Countess Bathory. The Author’s Notes attempted to shed some light on the inspiration behind the books but they are didactic and preachy. And I wouldn’t bet my bookcase on the authenticity of the supposedly ‘’true’’ sources.

Did I see the connection between the characters in Dracul and Bram Stoker’s novel? I did and in that sense, one could say that was all that mattered. But for me, it is too little. Almost everything else ended up in a bloody mess (no pun intended…) and speaking strictly for myself, this book was a chore to read. If you want to read an actually well-written novel that leaves poor Vlad at peace and deals with Folklore, dashing vampires, beautiful cities and the Devil, then read Fear and His Servant by the Serbian writer Mirjana Novaković. This is what I call ‘’Literature’’…