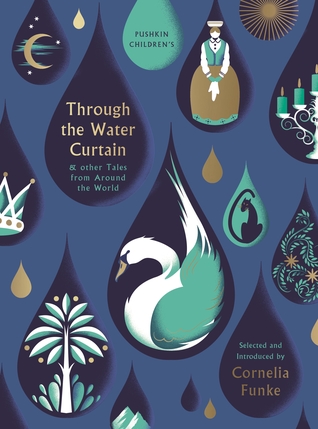 Title: Through the Water Curtain

‘’Fairy tales break all the rules of a good story and yet they find such powerful images for the deepest human emotions and fears that we sense deep layers of meaning in a poisonous apple or the grueling setting of a gingerbread house, and more truth than a thousand words would grant.’’

The beautiful front cover invites us on a journey through tales from all over the world that narrate the stories of fierce heroines who grasp their destiny be being clever, resilient and true to themselves. Following a beautiful introduction by Cornelia Funke, we travel from Russia to Vietnam and from Germany to Japan where we meet clever girls who are loyal to their principles, brave young men who aren’t afraid to follow their instinct, cunning helpers, strange creatures and evil characters who set impossible tasks to the youth. Each tale amply demonstrates why we love fairy tales, why the stories of old are vital to understand our modern world and become better human beings.

The Boy Who Drew Cats: A boy turns his vocation into a true gift and saves a temple. A beautiful tale from Japan.

Kotura, Lord of the Winds: A well-known Siberian tale about the Lord of the Winds and the girl who became his wife. I first read this story when I was eight or nine in an issue of the beloved Classics Illustrated and I remember I was so impressed with the bravery and kindness of the heroine. Reading it again brought me back to my childhood, a time filled with fairytales and magic.

Through the Water Curtain: A tale of a young man who was once a monk and destined to become a sacrifice. A strange story from Japan.

The Areca Tree: A Vietnamese tale about twin brothers and a brave young woman who loved them both.

The Tale of the Firebird: Who doesn’t know this beloved tale from Russia? Who hasn’t admired the immortal Nureyev hypnotizing the audience in the ballet version by Igor Stravinsky? Ivan Tsarevitch has to fulfill Herculean tasks to capture the Firebird. Baba Yaga, Koschei the Immortal, the horse with the Golden Mane, the vast wealth of Russian tradition.

(The Mistress of the Copper Mountain )

(The Firebird by Lev Lominago)

Bluebeard: The well-known, sinister French tale of a strange man, seven unfortunate women and the young wife who is in danger. I rather liked the writer’s connection between Bluebeard and Gilles de Rais, one of the most notorious (…and most fascinating, I would add…) noblemen. My grandmother told me this story when I was nine. I mean, talk about weird families….

The Six Swans: The classic German tale of Eliza and the six swans by the Brothers Grimm in a haunting rendition.

The Story of the One Who Set Out to Study Fear: A young man goes on a quest to discover fear. This one was boring, irrelevant to the overall theme of the collection and, frankly, badly written.

The Frog Princess: I had previously read this Ukrainian tale but the protagonist was a Mouse princess. In this version, three brothers shot arrows to find wives. The youngest prince is obliged to marry a frog and all sorts of strange things start happening.

The One-Handed Murderer: An Italian tale of a young woman who fights a dangerous man.

The Girl Who Gave a Knight a Kiss Out of Necessity: A Swedish tale of women teaching a lesson to those who think themselves superior.

I was intrigued by this collection. I loved the writer’s voice at the end of each story, explaining the origins and the inspiration behind each tale, paying homage to the cultures that created them. However, there were two issues that troubled me. Two subjective issues, mind you, but I wouldn’t be honest if I didn’t include them in my review. First of all, what is this narcissistic obsession with the writer’s novels? I was tired of reading how this tale or that influenced her Reckless series. I am not interested in your YA works, dear writer. On the unlikely occasion that I get a brain transplant that will change my personality completely, I will read your novels. I don’t care about your self- congratulatory putting on the shoulder.

In addition, I was almost insulted by Funke’s vicious remarks on Christianity Vs paganism. It goes without saying that you may support your new-age convictions to your heart’s content- because you’re trying to be fashionable- but offending the readers who actually believe is hardly civilized. I don’t like being preached in favour of one thing is another and I don’t respect the ones who don’t respect me. If Funke doesn’t respect worldwide beliefs, I don’t respect her atheism. I’m sorry but respect goes both ways.

I suppose, nay, I am certain that these observations are merely my personal gripes but I’ve learned to stick to my principles. Isn’t this what fairytales are about, after all? This collection is an obligatory read for the ones who love fairytales and folklore. If only the writer were as wise and down-to-earth as the heroines of these tales…

Many thanks to Pushkin Press and Edelweiss for the ARC in exchange for an honest review.