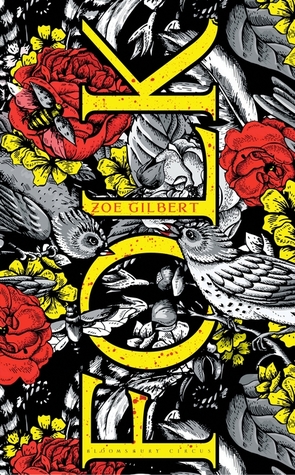 ‘’Listen, for the beat that runs through the gorce maze. It is an early twilight, the opening between last sun and first star, the door of the day closing until, soon, night will seal it shut. There are feet thudding in the gorce’s winding tunnels, hearts thumping in time. The girls of Neverness are running the paths, the strings of their bows held taut in outstretched hands, their arrows trembling.’’

Initially, my relationship with Folk was rather stormy. I requested it on Edelweiss and I received an unbelievably rude response so shame to their PR department. I thought, ‘’okay, it’s your funeral’’. However, I couldn’t resist buying it once it came out. The blurb reminded me of Kirsty Logan’s The Gloaming and the atmosphere of the British Isles was too much of a temptation for me to resist. And I am glad I read it. It is not without flaws but it is definitely an interesting and unusual read.

We are in the small island of Neverness, a fictional land inspired by the Isle of Man and resembling the Hebrides, adopting characteristics of the British (and especially, Scottish) landscape and culture. In a sequence of short stories narrating the characters’ lives and choices, we see the interconnection of the islanders, the folklore, the customs, the myths. Young and old, women and men seeking a way to make the jump to a ”good” life by remaining faithful to the tradition of Neverness. Sometimes, however, the island demands everything of them…

Gilbert’s debut starts with the striking, ominous introductory story depicting a strange, eerie and bloody custom. The stories are populated by the folk and the customs of the island. They are full of the fishermen’s superstitions, their wives’ spells. The reader feels the wind coming from the marshes and hears the scream of the mandrake because the witches are up to their tricks again. Winter moans a terrible song as the Kelpie appears in the moonlight. Changelings, fiddle players. Young girls searching for their future husbands, sisters turning against each other. Seagulls, shells, sand, rocks and the stormy sea.

Τhe islanders are forged out of the harsh land of Neverness. The island blesses them, nurtures them and frightens them. Their lives are hard, their hearts become even harder. A father tries to cope with a terrible secret, a girl who is considered the finest bride is in love with a boy who resists her. A young woman has to learn how to be a ‘’proper’’ housewife in an inhospitable family of brutes. A young girl needs to find her spirit to become a true fiddle player. Somehow, the Tale of Jack Frost comes our way, with magic sticks, stitches made with blessings and curses, love and ambition and a strange winter visitor knocks on our door.

The imagery created by Gilbert is extraordinary. It is vibrant, misty, even scary. You can see and smell the islands and the dialogue is more than faithful to the setting. Without sounding presumptuous, the only problem is the impression that Gilbert hadn’t really decided what Folk was going to be. A short story collection? A series of fables? A Magical Realism example? All these together with features of Folklore? Even though the combination sounds ideal, there was something in the overall writing that made everything seem disjointed and a little bit clumsy. I couldn’t bring myself to really love any of the characters and I wouldn’t include Folk in my personal squad of memorable reads.

Despite this issue, Folk is a collection I enjoyed. It is always a treat to read everything that is inspired by British Folklore and although Folk could have been better, it remains an exciting, atmospheric debut.

‘’The wind drums its song at the door all night, a beat for the devil to dance to, leaving the prints of hooves around the house. Winfrid tugs her stitches tight to keep him out. I watch my needle dive through the weft, the stab and the gire, and dream up patterns I’d never stitch, secret rhythms.’’