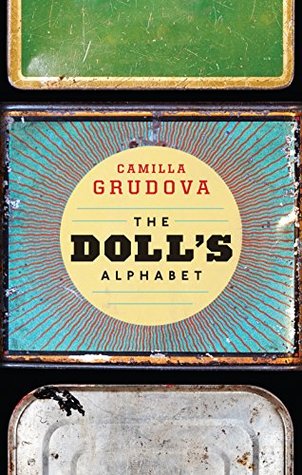 ‘’A woman discovered that a bunch of her jewels had faces carved into them, someone else a gargoyle tattoo on their back, and a car was found with three stone kings sitting inside.’’

I had read a number of reviews and articles on Camilla Grudova’s work but I hadn’t found the chance to familiarise myself with her writing. Now that I’ve read The Doll’s Alphabet, all I can say is that I have found a new writer whose books I’ll always choose without even glancing at the blurb. This is a mesmerizing collection.

Traces of Angela Carter and Margaret Atwood can be found in these stories but I would say that Grudova has established a style of her own and can be considered a household name that needs no comparisons. Personally, I found her writing to be miles ahead of Atwood’s short stories and the features of Magical Realism are presented in a more whimsical, ethereal yet terrifying way than Carter, even when we’re dealing with ‘’heavy’’ themes. And every story serves serious themes related to womanhood, gender dynamics and freedom.

Setting her stories in fluid time periods, in unnamed cities and countries, Grudova uses recurring motifs to comment on transformation and development, the woman’s struggle to escape a world dominated by men and a society that ‘’honours’’ preconceived notions about woman with religious devotion, imposing false expectations on the women’s shoulders. The sewing machine is an instrument that creates tailor-made clothes and tailor-made ideas. Women use this invention to create their own visions and escape. Same goes for dolls that retain a prominent position throughout the collection. The doll is one of the simulacra of life and, let us be honest, the deep desire of the society to regard women as dolls that need to stay pretty, delicate and above all silent. Well, thank you very much but no.

Still, love exists even in terrifying settings. There may be dysfunctional couples but desire and love haven’t vanished. Feelings change, bound to external factors that influence our lives and change is fundamental to achieve independence. These are the 13 stories created by a brilliant mind.

Unstitching: A woman unstitches herself. Soon, more women follow her example much to the dismay of their husbands and partners. A simple yet powerful metaphor of expressing your true self and the difficulty of being a woman.

The Mouse Queen: A couple of young academics specializing in Latin. The corpse of a female dwarf, pagan gods, Catholicism, Ovid, dolls, English Literature, Greek Mythology, motherhood and, naturally, Tchaikovsky and The Nutcracker in a story that is the definition of perfection.

Waxy: A totalitarian state where women are taught how to ‘’support’’ and ‘’please’’ their Men, where participation in the Exams is mandatory, where the regime’s Philosophy Books have become twisted Bibles. A community where privacy is nonexistent, where chemicals leave women bold, where people disappear overnight. A terrifying story about birth control and motherhood, twist and betrayal, relationships and freedom of choice in a state that seems like a more twisted version of the Soviet era. A story that rings all the bells for the current political situation in the USA and in many European countries.

The Doll’s Alphabet: Make of this what you will. I loved it…

The Mermaid: An interesting take on the Selkie myth in a haunting story about marriage and lost chances with references to folklore and Greek Mythology.

Agata’s Machine: Agata has created a rather extraordinary sewing machine…I felt extremely connected to her views on life and I was fascinated by the use of the Pierrot and the Angel as archetypes.

Rhinoceros: A story of a couple that struggles to serve a very particular vision of Art. It may sound simple but the last three pages of this tale will have you stare in shock for minutes…

The Sad Tale of the Sconce: A tale about the ‘’offspring’’ of a wooden mermaid. About sailors, antiques and the circle of life. A haunting story reminiscent of Japanese myths and with a strong influence of Angela Carter. There is an aura of dark sexuality in this tale that makes it extremely powerful and memorable. And did I mention the footnotes at the end?

Edward, Do Not Pamper the Dead: The story of two strange people, set in a country resembling the members of the Soviet Union. Poverty, independence, relationships. And an unusual cemetery.

Hungarian Sprats: What if we had the opportunity to can everything, literally everything, in order to protect and maintain our possessions? It sounds positively scary but for Baron Dambski it becomes an obsession.

The Moth Emporium: A vintage costume shop surrounded by a fence of dismembered mannequin limbs painted blue. A story rich in Danish Literature, Art, culture and the aura of bygone eras. As we approach the end, things take a sinister turn…

Notes From A Spider: The thoughts of a spider in an old European capital. A story definitely inspired by Kafka.

If I had to compare Grudova to another writer, my choice would be Isak Dinesen. Magical Realism, sexuality, feminism, independence. This collection will stay with you long after you read the last page. If you give this collection a chance -even though the themes may seem ‘’dark’’ to you-you will discover one of the most unique stops of your reading journey.

‘’The angel hasn’t come back since you left. He’s waiting for you.’’