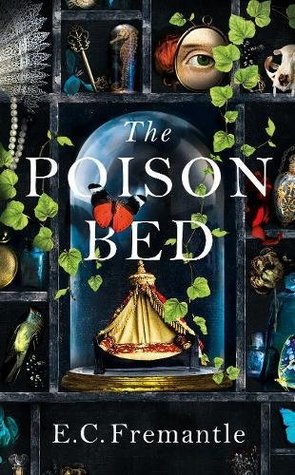 ‘’Whether we fall by ambition, blood, or lust

Like diamonds, we are cut with our own dust.’’

The Duchess of Malfi, John Webster

May I just say that this is one of the most intriguing front covers I’ve ever seen?

Few eras were as tumultuous and fascinating as the Jacobean times. A period that produced some of the bloodiest tragedies in British Theatre, with John Webster and Ben Johnson as the leading playwrights, an era that was sadly defined by an incompetent king, the son of a dull mother. James I thought he knew all about leadership and religion (…and witches…) when, in fact, he knew nothing about anything. Depravity, fundamentalism, superstition are three words that can summarize his reign with significant accuracy. This is the colourful background of Fremantle’s The Poison Bed, an exciting Historical Fiction novel.

Frances Howard and Robert Carr are two young people imprisoned within their personal and familial ambitions, their partners’ obsession and the fickle mind of a horrible king. Soon after their marriage, which seems to be their own way to escape, a strange murder occurs in the Tower of London. One of James’ protegees is found dead and our protagonists need to prove their loyalty. However, honesty has a very sketchy part to play in this unusual case.

Ιn this novel, the phrase ‘’based on a true story’’ finds its proper meaning. Inspired by the unsolved case of the death of one of James’ playboys, Fremantle weaves an intricate plot where this incident plays second fiddle. The focus is on human relationships with the stormy Jacobean era as the background. The manipulations of the noble families, the balance between a wife and a husband, the relationship between lovers of both sexes and their implications, the dynamics between a ruler and his subjects. These are themes that transcend the 17th century, relevant to all eras and societies. Naturally, religious disputes, witchcraft, truth, and betrayal can only spice up the excellent mixture and the result is a novel that is not the same old Historical Fiction book with a ‘’fashionable’’ feminist message but a powerful and well-researched journey to an age of danger, lust and, ultimately, change.

The writing style is sharp, satisfyingly faithful to the depicted period and the interactions are vivid and believable. The writer doesn’t waste space to long descriptions and the scenes take place mostly indoors. What I find problematic was the almost simultaneous use of the first and the third personal pronouns within the same chapter to refer to the same person. I admit, it greatly bothered my teacher-self. In addition, I have to say that the overall result would have been even better if the actual number of pages had been diminished. There was quite a lot of repetition that did little to advance the plot.

What made me enjoy The Poison Bed so much was the impression Frances’ character had on me. She is shady and cunning to the point of being manipulative and ruthless and I loved her. I love characters that are ambiguous and complex and this is a crucial factor that can make a Historical Fiction novel successful or dull. I am happy to say that Frances elevated the story and became one of my favourite heroines. Rober is a character that becomes weaker towards the end and I cannot say I was captivated by his presence. When compared to Frances every character paled.

This is an excellent combination of Historical Fiction and period thriller created by a talented writer. Despite certain technical mistakes and omissions, The Poison Bed will keep you good company, especially if you are fascinated by the many aspects of the Jacobean era.

Many thanks to Penguin UK and NetGalley for the ARC in exchange for an honest review.