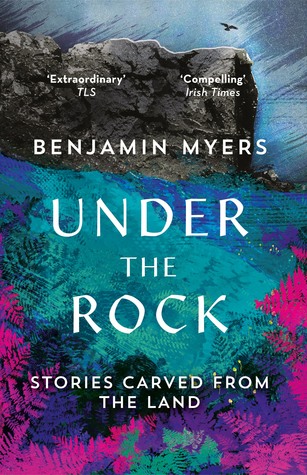 Title: Under the Rock: Stories Carved from the Land

Let the seasons set the pace. Months, not minutes.

See a century that feels like a second. Let life breathe.’’

What is the first image that comes to your mind when you think of the word ‘’moors’’? Mine is the untamed scenery of a land that stretches from horizon to horizon, of rocks and fens and a wild dark-haired girl running. Yes, my vision of the moors was born long ago, when I first read Wuthering Heights and discovered the wealth of British Literature. I imagine the crows and the ravens, abandoned abbeys, a dog howling in the night. The Hound of the Baskervilles, the works of Thomas Hardy, even the brilliant 2018 film Ghost Stories by Jeremy Dyson and Andy Nyman. The moors are bound to the British culture and way of life. In Under the Rock, Benjamin Myers pays a tremendously beautiful homage to the North, the nature, the legends, the danger, and the mysticism and shows how we destroy the very thing that nurtures us so freely.

‘’This way ghosts were born: in wooded dells, down dark lanes of hedgerow and holloway, across clouded fields, when drank men took fright of the unblinking brilliant xanthous eyes of an ice-white barn owl in flight […] the nocturnal call of the owl runs the length of the woods and permeates the dreams of those of us who live close by, prone under duck dawn, the night world at our window.’’

Following the musings of Ted Hughes, Myers is our guide on a journey to Scout Rock, Mytholmroyd and the land of Yorkshire, mystical, untamed, rebellious. A shudderingly beautiful introduction by Benjamin Myers paves the way for our visit to the North where we witness an exciting and poignant cycle that starts again and again. Myers leaves London behind, the metropolis that has become practically hostile to its residents, and moves to a land full of striking omens and dark signs, a land where people disappear or kill themselves. A land made of dark November nights, a land that gave birth to a masterpiece and to a character as fascinating as he is controversial. Naturally, I am referring to Wuthering Heights and Heathcliff whose ‘’mother’’, Emily Brontë, is by definition the patron goddess of the moors.

‘’The moor, […] where strange things happen, and have done so for centuries.’’

People go missing, stories of strange occurrences, otherworldly creatures, animals, fairies, ghosts, elements of a pagan era. And in Northumberland, the spectral Roman soldiers still guard Hadrian’s Wall, the witness of a violent supremacy that left its mark on our world forever, Can we image Heathcliff wandering those forests, determined and outraged? What could have gone through Emily’s mind during his ‘’conception’’? Can the mystery of the hero’s lost years be found close to the haunting moors? No, we will never come to know. This is one more secret buried in this wild place…

Imagine man coming with dynamite and diggers and drills.’’

Industry is destroying a land where kings have walked, defining Britain’s past and course in History. The residents fight against the wrath of nature that punishes us for our disrespect and arrogance. Myers wisely stretches the excessively harmful presence of  Man that has violated a beautiful place. His chronicle of the floods that struck the area is powerful and frightening. What I found extremely interesting is his thoughts over a different aspect of the human presence in the North. The potential influence that nature exerts on the residents. He refers to brooding, rebellious literary figures and notorious real-life serial killers. Can a place acquire a tradition of giving birth to wild characters, even criminals?

‘’England is an idea in constant reinvention,

Wood, Earth, Water, Rock…A journey elemental, luscious, dark, seductive, misty, haunting, captivating like the moors in the twilight, like the Northern nature after the rain. I travelled to a place of unique beauty, to a land that narrates a thousand stories within these marvelous pages. This is a book which Emily Brontë would have chosen to accompany her in one of her long walks in the moors. A book that would grace Dickens’ library, a book that would inspire Arthur Conan Doyle and Thomas Hardy.

‘’Because on a night like this the moon is intoxicating. It can make a person unsteady on their legs, and the blood fizz in the ears. It creates a thirst, a hunger, an appetite. A need. The hunter’s moon is so called because it was deemed the best time for hunting parties to pursue their quarry. In towns across the land nightclub bouncers and police always find their hands particularly full on such nights.’’

Many thanks to Benjamin Myers, Alison Menzies and Elliott & Thompson for the finished copy.